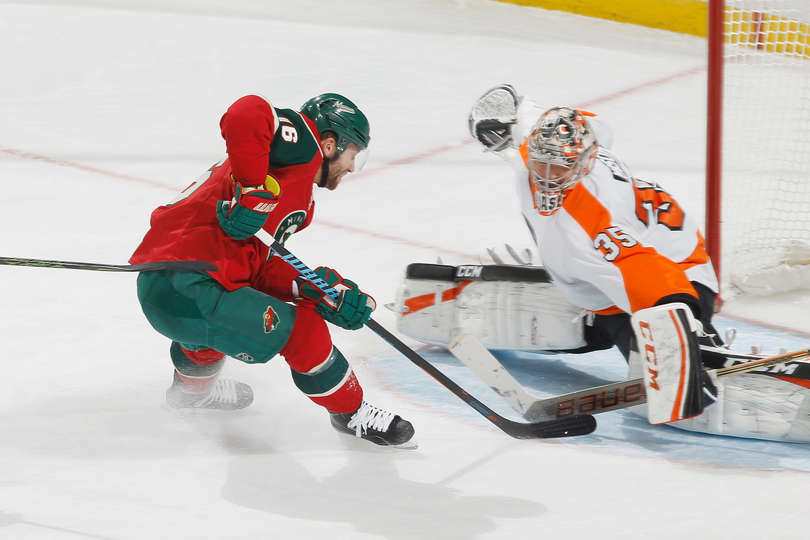 St. Paul – It was a strange evening for the Minnesota Wild Thursday at the Xcel Energy Center.

Jason Zucker made one of those spectacular breakaway plays that people go home buzzing about in the second period of the Wild-Philadelphia Flyers game.

Earlier, Marco Scandella crashed heavily into the boards and hobbled off, heading for the Minnesota dressing room. But Scandella, who scored the Wild’s first goal against the Flyers, came back so quickly he did not miss a shift.

To top it off, Zach Parise displayed some magic with an unassisted tying goal in the third period for the Wild, much to the pleasure of 19,125 ticket buyers.

However, a decent start and a strong finish for the Wild were sandwiched around enough ineffective play to allow the Philadelphia Flyers to escape the X with a 4-3 victory in overtime.

“We didn’t get a win, so that’s never a good feeling,” Zucker said.

Philadelphia scored twice within 52 seconds midway through the second period and got a decisive goal from Michael Del Zotto 4:23 into the five-minute overtime to leave Wild players shaking their heads about a possible point lost.

“We fought back, and that’s great to get the point at that point,” forward Charlie Coyle said, “but we can’t afford to play games like that, have those lapses.”

Coach Mike Yeo called a rare early timeout midway through the second period after the Flyers took a 3-1 lead on goals by Del Zotto and Ryan White less than a minute apart to confront what he was seeing.

The end result is that he came away from this defeat feeling positive.

“Actually, I’m pretty happy with the guys,” he said.

Minnesota is in the midst of perhaps its toughest stretch of the season, and Yeo said the players probably learned a few things Thursday.

Yes, they have played five games in eight days, and yes, they have four more in the next seven days. But they did rally on Zucker’s dazzling breakaway goal and Parise’s relentless second-effort marker.

Prior to that, when Philadelphia seemed to take charge in the second period, his boys “looked tired,” Yeo explained. So he called them over to remind them about something.

“I think it showed in the second half of the game that it’s all mental,” Yeo explained. “Once we addressed it, the guys started to feed off each other’s energy. It takes a lot of character to come back with the schedule that we’ve had. We easily could be sitting here with two points. We got one point, but I think more important, we understand going forward just how important it is to make sure you concentrate on the preparation and understand that it is all mental.”

Yeo came away pleased because his boys not only rallied, but seemed to control overtime until a poor line change left them short a man in the final minute of the extra session.

The finish left Minnesota 1-7 in overtimes this season, which naturally stings.

“We had the chances,” Parise said. “That’s been the theme, where we get three or four good looks and we don’t score.

“You’re going to give up chances. That’s what three on three is. We’ve been on the losing end of it too much. Way too much, I guess. We haven’t scored when we’ve had those chances.”

“I think this was a good lesson for us,” he said, “and now we use it going forward.”