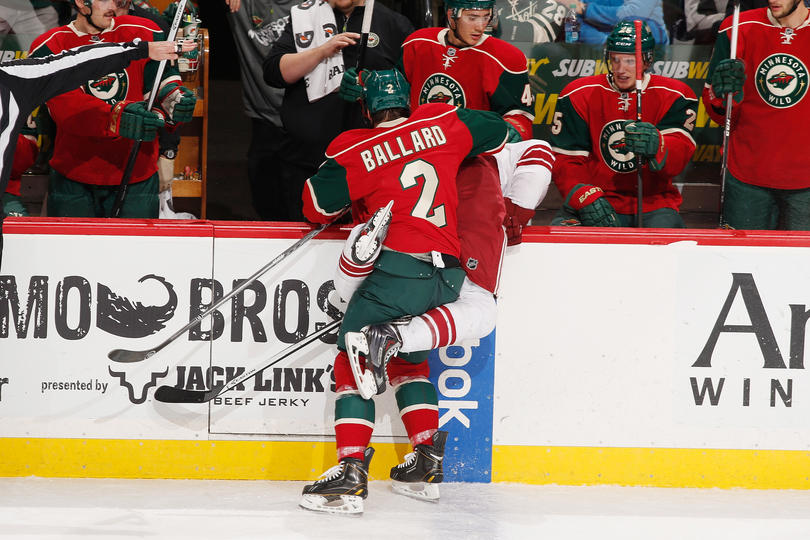 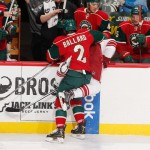 Featured Image:
The Wild’s Keith Ballard checks Kyle Chipchura of the Phoenix Coyotes during the November 27, 2013 game at the Xcel Energy Center in St. Paul, Minnesota. (Photo by Bruce Kluckhohn/NHLI via Getty Images)

SAINT PAUL — On the night before Thanksgiving, slow starts and injuries continue to be a part of the Minnesota Wild’s main course.

It’s hard for the latter not to be the case. Star forward Zach Parise was injured during the first period of Monday’s 3-0 loss in St. Louis and missed his first game of the season Wednesday night. Just Parise being sidelined with a bruised foot would be enough cause for concern.

One way or another, having a player of his caliber temporarily out hangs over the team like a cloud.

However, it is not just Parise. Minnesota saw both sides of the injury coin during Wednesday’s 3-1 loss at home to the Phoenix Coyotes where Radim Vrabta scored twice; including an empty-netter. Three players returned against the Coyotes yet Minnesota head coach Mike Yeo was 15 minutes late for his press conference after the game because he was discussing roster moves out of necessity.

Mikael Granlund, who missed the past two games with an upper-body injury, went for a hit behind the Phoenix net on Coyotes defenseman Connor Murphy during his first shift Wednesday. The 5’10”, 186 lb. forward ended up getting hit high in the head instead and slowly skated to the bench.

He did not return. No one expected Granlund to come back. Just like that, Minnesota was down to 11 forwards 1:52 into the game.

Certainly it hasn’t helped the Wild that the team spent two straight games mixing and matching forward combinations. There has been no consistency between players coming back in the lineup and plans being changed due to guys getting hurt.

Still, that is not an excuse for the Minnesota head coach.

“Every game right now we have different guys coming out on different lines, but there are no excuses,” said Yeo.

Despite losing Granlund on Wednesday, two other players came back from injury and finished the game. Former Coyote and current Wild defenseman Keith Ballard returned from two broken ribs. Torrey Mitchell stepped back into the lineup after missing three games with a lower-body injury.

A third player, goalie Josh Harding, dressed for the first time since being injured in warm-ups against Winnipeg on Nov. 23 but he did not play.

For Ballard, who had been missing since Nov. 5 against Calgary, Wednesday’s game was an opportunity for him to return to game speed. He played 17:23 while being paired with Clayton Stoner.

“I felt alright,” the Baudette, Minnesota native said after the game. “It’s been three weeks since I played a game so just getting in and battling a bit and getting into some of those 1 on 1 battles in the corner, they take a little bit more out of you if you aren’t used to it.”

He was more than ready to battle. Ballard came out looking to hit and during one shift in the first period had physical confrontations with two different Phoenix players.

Still, for every healthy and healed player like Ballard, there seems to be another Granlund or Parise. While Minnesota was 6-2-1 during Ballard’s absence, the team has appeared to slow down recently.

“It seems like we’re very reactive and on our heels,” Yeo admitted. “I really think the injuries coupled with us looking at the magnitude of these games is that we’re trying to go out there and be a little bit safe.”

Right now the room for error is small. The Wild is currently in a stretch where nine of eleven games are against teams in the top eight of the Western Conference. The next few weeks are a time to see how the team compares against the conference elite. So far the West has been dominant through the first two months. It has reached a point where the best Eastern Conference team would struggle to qualify in the Western Conference.

Given that Minnesota, presently tied for fourth in the Central Division with Colorado, is after its second consecutive playoff berth it can’t afford to stumble too far in a Western Conference arms race.

The Wild certainly cannot afford to start games slowly. That was the case Wednesday when besides losing Granlund early, Phoenix’s Mikael Boedker blocked a Jonas Brodin shot and went on to score on a 2-on-1 8:13 into the game. By the time Minnesota made it 2-1 with 9:58 remaining in the third period thanks to Dany Heatley recording his fifth goal of the season (the first Wild goal tallied in 119:57), it was too late.

Starting slow, injuries or not, has also been a case throughout much of the last week.

“You get yourself in a hole 2-0, it is tough in this league to battle back,” said Ballard, who also said he was adjusting from practice to game speed in his first game back, about the team’s tendency to fall behind.

“You’ve seen in the past few games. The start is so crucial. I know we’re behind and we battled back against Winnipeg and we pulled it off, but you can’t just rely on being able to eke it out and come back. You can’t afford starts like that. It’s a cliché and true.”

Or as Yeo put it, “We have to quit shooting ourselves in the foot with some of these starts.”