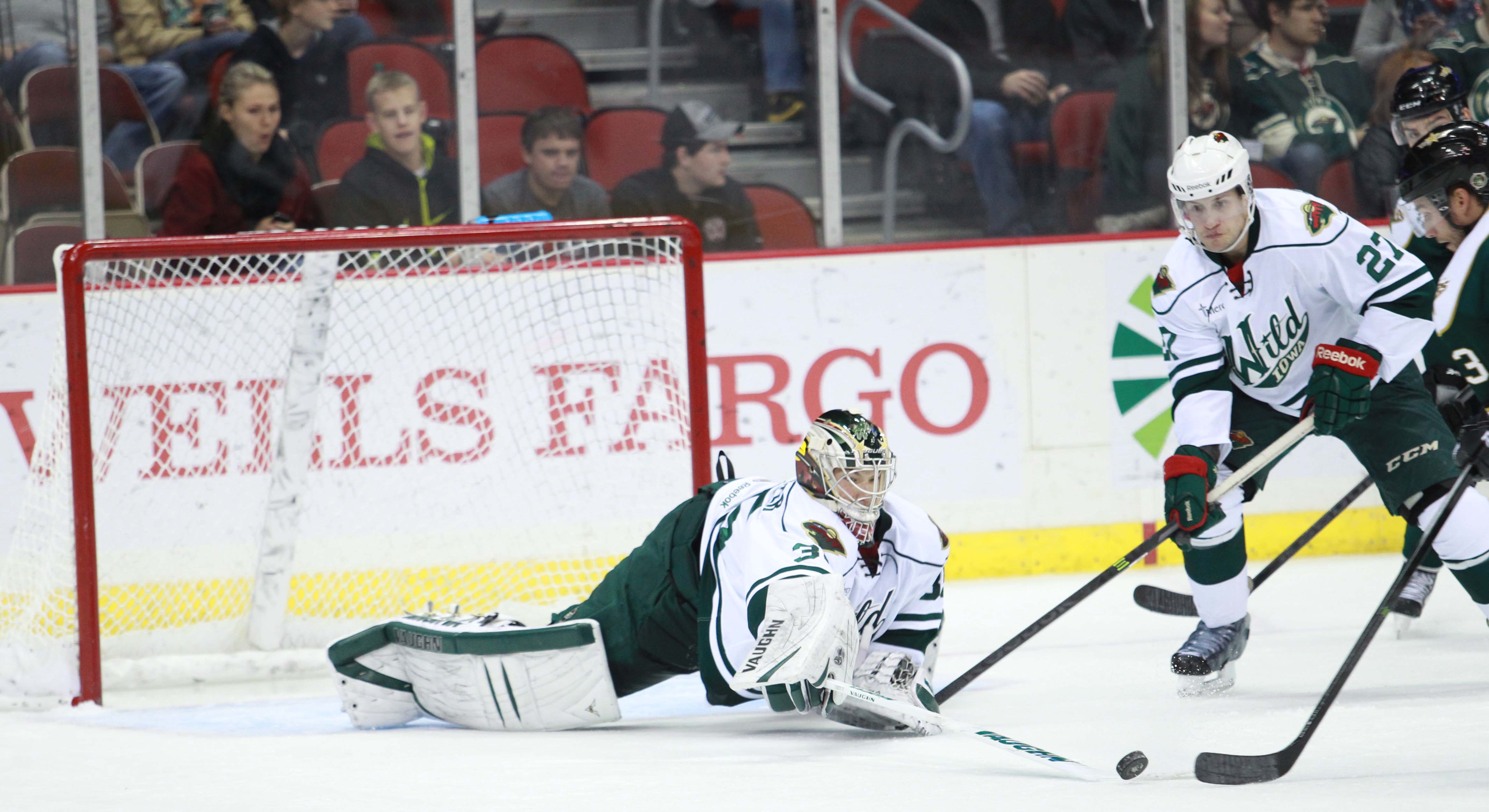 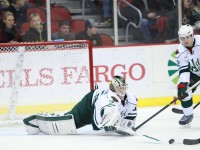 Featured Image:
Darcy Kuemper pokes a puck away from an attacker against Texas on Nov. 1, 2013.
(Photo: Reese Strickland/Iowa Wild)

I-35 commute offers path of least resistance to St. Paul …

Des Moines, Iowa – A year ago, a player being recalled by the Minnesota Wild from its American Hockey League affiliate meant a flight from Houston to the Twin Cities or wherever the Wild may have been playing on that given day.

The Houston Aeros have moved to Des Moines, Iowa and are now the Iowa Wild, shortening the travel time between the Minnesota Wild and their AHL affiliate. Des Moines is just about a three-and-a-half hour drive away from St. Paul making it much easier and less stressful to be recalled and reassigned for the players.

Wild goaltender Darcy Kuemper recalled the experience of being called up to the Minnesota Wild from Houston as a member of the Houston Aeros.

For Kuemper, traveling between the Iowa Wild and Minnesota Wild has been easier with the team in Des Moines.

“Here it’s kind of a lot more relaxed situation,” Kuemper said. “You get the call and they’re like ‘get here by tonight’ so you get to go home, you don’t have to worry about not eating or anything, you can take your time, pack up and hit the road… Obviously it’s real nice having your vehicle there too when you’re up there.”

Kuemper and fellow Minnesota Wild goaltending prospect Johan Gustafsson have been up and down between Des Moines and St. Paul due to health problems with Wild goaltender Josh Harding, who was recently placed on injured reserve with an undisclosed illness.

Although Gustafsson hasn’t played in any games in the NHL this season Kuemper has seen action in four games (three starts) and has a 2-1 record with a .911 save percentage and 2.28 goals against per game average. He recently recorded his first NHL shutout in a 4-0 win against the Nashville Predators in Nashville on Jan. 12. He made 39 saves in a 2-1 shootout win against the Los Angeles Kings on Jan. 7.

“We would have our morning skate in Minnesota and if you get off the ice at noon and you’re trying to figure out who’s going to be playing where, it was nearly impossible to get someone on a 2 o’clock (flight) to get there at 5… If they’re lucky,” Mill said. “It was a challenge to call a guy up on a game day and get them there in time for a game.”

Wild defenseman Jon Blum was recalled on Dec. 31 and Mill used the transaction as an example for how easy it is now that the team is in Des Moines.

“Jon Blum had a practice here (Des Moines) today,” Mill said. “Luckily we don’t play tonight in Minni but he’s going to there if we had a game tonight. He’s going to be there later this afternoon… Having the ability to have a guy on a moment’s notice, essentially, in Minnesota for us is huge and it’s great. From a player development standpoint it’s excellent too.”

Forward Jason Zucker said that he wasn’t put into a game without a practice the same day very often last season because they often times would call them up the day before.

“They call after 3 o’clock and then from there on you’re on a flight that night, maybe six or seven and then you’re there for morning skate,” Zucker said. “That doesn’t change much because it’s still the same, you’re just driving up instead of flying, which in my opinion is much easier.”

Zucker is currently seventh on the Iowa Wild in points with 13 (eight goals, five assists) in 22 games for Iowa. Zucker has played 13 games with the Minnesota Wild and has three goals.

Even though he has only played 22 games for Iowa he leads the team with 80 shots on goal. In 13 games with Minnesota he has 27.

Moving the team to Des Moines hasn’t just helped make lives easier when recalling and reassigning players but it has also helped make traveling to games on the road easier as well.

If the team were still in Houston this season the average traveling distance from the Toyota Center in Houston to all of the other AHL cities would be about 1,502 miles (by bus). With the team in Des Moines the average travel distance from the Wells Fargo Arena in Des Moines to all other AHL cities is just about 1,043 miles (by bus).

“We’re on buses a lot more instead of flying all over the place,” Mill said. “In Texas you had Austin and you had San Antonio within three hours. Here you have Milwaukee, Chicago, Rockford, Grand Rapids all within busing distance and I think that’s an advantage as well.”

Kuemper said that while flying is nice, it’s not as easy as taking a bus sometimes.

“It’s not like in the NHL where you have chartered flights,” Kuemper said. “It’s usually the red-eye flights or the early-morning ones so it gives you a little more sleep. When you’re on the bus you can just relax, you don’t have to worry about going through security or anything like that.

Kuemper said there is also a lot less travel between the games as well and that it’s been easier on the players.

Even though they have left nearly 20 years of IHL/AHL tradition behind as well as a dedicated fan base when they moved the team from Houston to Des Moines it seems that there are a lot of positives that the players, coaches and executives are taking from the move.