Wild forward Zach Parise celebrates with fans after scoring his third goal of the series in the first period of Minnesota’s 6-2 win over the Winnipeg Jets on Sunday night at Xcel Energy Center. (MHM Photo / Jeff Wegge)

St. Paul – Suddenly, we have a series.

In the eyes of many disenchanted Minnesota hockey fans, the Wild looked like they would be unable to do anything in the Stanley Cup Playoffs but absorb four straight playoff losses to the muscular Winnipeg Jets.

With heaps of snow bringing back memories of February — they went 9-4-3 that month — the Wild executed a quick 180 to snuff out the high-flying Jets 6-2 in front of 19,175 at the Xcel Energy Center.

“We got a life, now,” winger Zach Parise said.

After the Jets dominated the first two games in Winnipeg, they grabbed a 1-0 lead on a softy that squirted past goalie Devan Dubnyk 4:50 into the first period Sunday.

“It didn’t defelate us by any means,” Parise said. 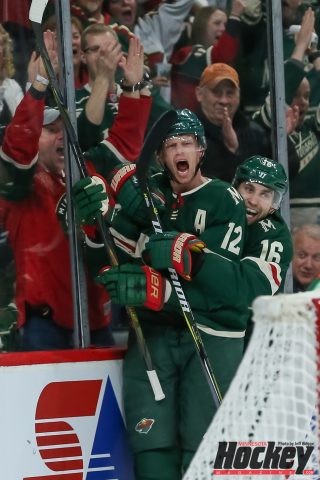 Wild forwards Eric Staal and Jason Zucker celebrate Staal’s first goal of the series on the second period of Minnesota’s 6-2 win over the Winnipeg Jets in Game 3 of there first round Stanley Cup Playoff series on Sunday night at Xcel Energy Center. (MHM Photo / Jeff Wegge)

Mikael Granlund banged in the rebound of a Mikko Koivu shot on a Minnesota power play midway through the first period, and the Wild netted five of the ensuing six goals to pull within 2-1 in the best-of-7 series.

“We needed that — a little pushback on these guys that we knew we were more than capable of,” Dubnyk said. “And we needed to win the game, plain and simple.”

Three games down and things have changed.

“We were good in the first two, and they didn’t like their game,” Jets coach Paul Maurice said. “They were good tonight and we didn’t like our game.”

The win was a team effort for a Wild lineup that at times appeared unable to keep up with the Jets during the two games in Winnipeg.

“I thought we got really good games from our big players,” Wild coach Bruce Boudreau said.

“That shows a lot of good things about our team.” Greenway said. “We got scoring from our top two lines and we got secondary scoring, too. Everyone’s pushing in the right direction.”

Factor in an air-tight defense that blocked 20 Winnipeg shots compared to eight blocks by the Jets and you have the recipe for a win.

Hits — such a factor in Winnipeg — were 26-19 in favor of the Jets but did not seem to faze the home team.

“It’s a physical series,” Granlund said. “It’s fun to be out there — there’s a lot of contact and a lot of emotion.”

Midway through the final period the result became so obvious that some in the big crowd took note of the four-goal lead and the wintry weather and chose to exit the premises a little early for what they expected to be a snow-slowed ride home.

Like the Wild, they could look forward to a rematch two nights later at the X.

One more Minnesota win and the series will come back to the X for Game 6 next Sunday.