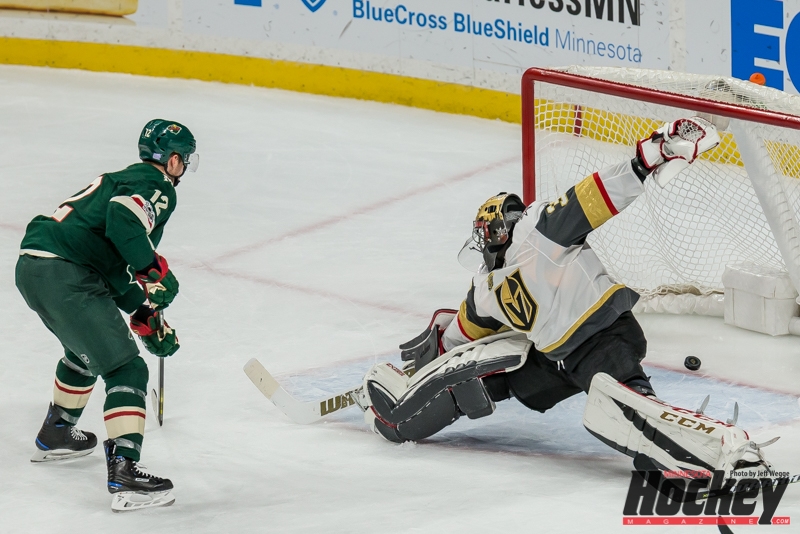 After getting called out by GM Chuck Fletcher and coach Bruce Boudreau, the Wild were ready to play Thursday night.

Although they got one from management, they probably didn’t need a kick in the tail, according to center Eric Staal. After all, players also lived through a 6-3 loss to St. Louis followed by a horrid 7-2 loss to Winnipeg, games that spurred plenty of negativity on the Internet from Wild backers.

Well, there you have it.

Staal scored at 12:05 of the final period to give Minnesota the lead and his empty-netter secured a 4-2 win over Vegas in the first meeting between the teams Thursday night at the Xcel Energy Center.

Fletcher’s public criticism of his team’s overall play, especially numerous turnovers against the Blues and the Jets, wasn’t his only action. He also waived ineffective defenseman Kyle Quincy and picked up veteran journeyman defenseman Nate Prosser on waivers from St. Louis before the game against Vegas.

Consequently, it appeared to be a determined group that took the ice in front of 19,084 Thursday night.

“When teams get smoked pretty good,” Boudreau said later, “their character shows through.”

The Wild, with earlier goals from Mikael Granlund and Jonas Brodin and 29 saves from Devan Dubnyk, tried to ease past a horrendous stretch when they had won just two of their previous six games, one by shootout.

“When you come off a shellacking like we did at Winnipeg,” Dubnyk said, “you’re trying to get back to feeling like you’re used to feeling.”

“We know what’s going to make us successful,” Staal said, “and we’ve got to make sure we do that and find that every game.”

What they did was mostly contain the offense of the high-flying Golden Knights — Vegas came to town with a 15-7-1 record — and spread their offense around.

As Boudreau was quick to point out, 17 of the Wild’s 32 shots on goal came from defensemen: six from Matt Dumba, four from Ryan Murphy and three from Ryan Suter.

“An awful lot from out blue line,” Boudreau said.

It was an outstanding contribution to a team missing regular D-man Jared Spurgeon, who is sidelined for perhaps two weeks with a groin injury, Boudreau said.

Prosser, an Elk River, Minn., native who has been let go twice and now reclaimed twice by the Wild, is expected to fill in as Minnesota’s seventh defenseman while Boudreau goes with youngsters Mikey Reilly and Gustav Olofsson as his regular fifth and sixth D.

Reilly, who set up Granlund’s goal Thursday, said it will be a relief to know he’s in the lineup and no longer facing an possible benching for every mistake.

And Prosser will be available as a backup.

“Prosser’s a guy we all know,” Boudreau said. “We know he’s going to come in and fit in with the group.”