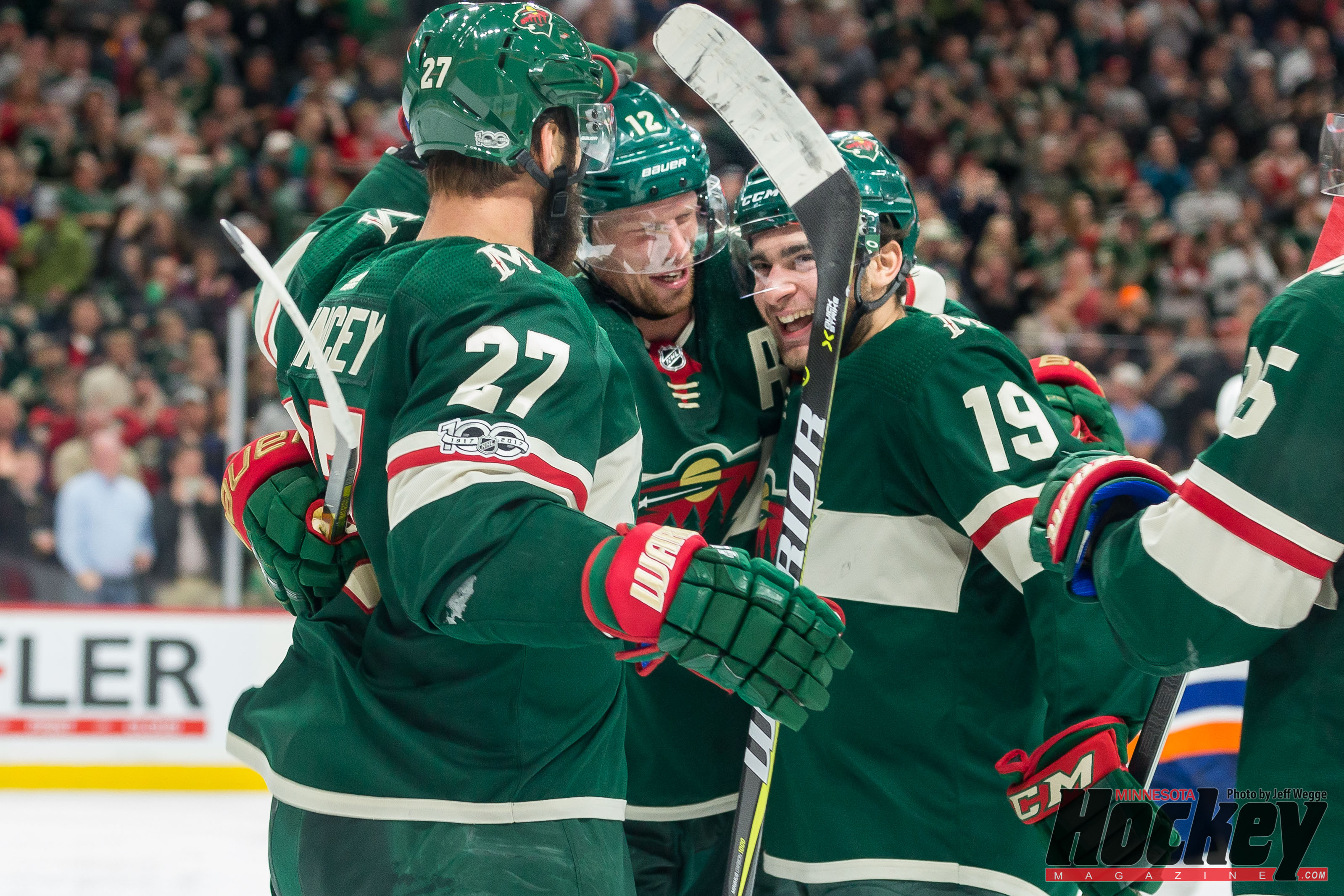 To oversimplify what just happened to the Wild: Happy players, happy result.

After integrating a few psychological maneuvers, the Wild choreographed a 6-4 victory over the New York Islanders Thursday night at the Xcel Energy Center.

They went into the game nursing the sting of a lackluster 1-0 loss at home to Vancouver two nights earlier, carrying a grimace-inducing 2-3-2 record and missing injured top-line forwards Zach Parise, Nino Niederreiter and Charlie Coyle plus backup winger Landon Ferraro.

They came out of the fray feeling pretty fine.

“I thought the first 12 minutes or so was as good a start as you could hope for,” Wild coach Bruce Boudreau said.

Minnesota produced 13 of the first 14 shots on goal, eventually picked up goals from six players including the NHL first goal for both Luke Kunin and Zack Mitchell and sashayed past an Islanders team that kept pecking away. On the second game of a six-game homestead, they again hit .500.

Things started the day before, when Boudreau skipped the tongue-lashing and served up a light-hearted workout.

“I’ve been pretty hard on them vocally, every day that we haven’t had success,” he explained after the win over the Isles. “At Game 7, if you start doing that, eventually they’re going to tune you out. I thought we needed a little break and let the players relax a little bit.

“Even though they knew the importance of tonight’s game, to get on the winning side at home, I thought they needed a smile a little bit.”

Whether the rash of injuries — Parise underwent back surgery this week and is not expected back until Christmas or later — has forced Minnesota’s players to grip their sticks too tight or not, this team has often looked out of sync.

On Thursday, thanks to short-handed goals by Eric Staal and Kunin plus even-strength goals from Marcus Foligno, Jason Zucker, Jonas Brodin and Mitchell, the Wild seemed in control most of the evening despite New York pushing back and finishing even with Minnesota in shots on goal at 33.

The score was only close because of a last-minute Islanders’ goal, however.

The Wild stayed on top of their game most of the evening, making it an enjoyable night for the home side, as well as 18,824 Xcel Energy Center customers.

“We’ll take it,” Staal said, “and look forward to Saturday.”

That should be fun, don’t you think?