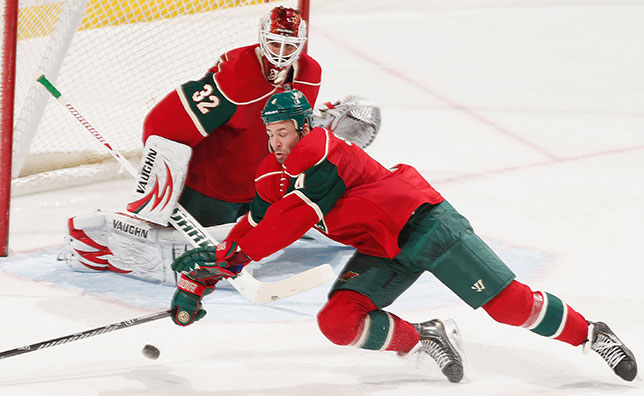 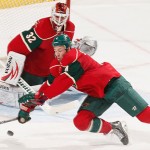 Last night at the Xcel Energy Center I was on the losing end of a winning game. Early on in the first period my beloved iPhone, a tool that allows me to record post game interviews, check quick stats and of course keep contact with the world, decided it didn’t want to work anymore. On any day that wasn’t a game day I probably wouldn’t have been so bothered by it, but there I was in the press box without a key piece of my life.

As the Wild scored goals and chalked up their first win in seven I Googled how to get my touch screen to start responding again. First I had to try to hard restart it, no luck. Next I had to erase it and perform a factory reset. I went through this process a solid five or six times, occasionally contemplating the idea of deep-sixing the handset and letting it fly off the press box level to its demise, before finally conceding defeat and admitting I was powerless to help my phone.

As my iPhone saga unfolded a few members of the press noticed my obvious frustration and came to my rescue with recorded audios I could use as well as calming words meant to refocus and get me back on my game. These key words and phrases were running through my head: restart, refocus, back on my game, back to basics. I glanced behind me at the Minnesota Wild players who were watching their team from the press box and then looked back down towards the ice … and it was at that moment that I had a revelation.

As the Wild skidded six games before finally winning last night against the Buffalo Sabres we had observed them attempting to fix their broken game night after night by resetting, attempting to get back to basics and use the system and structure that is meant to be the backbone of the squad. Much like me with my iPhone, as they tried to reset back to their baseline operating system and found themselves still facing failure, they grew more and more frustrated and agitated until there was little semblance left of team cohesion.

They came under pressure from fans, themselves, the coaching staff and whoever else could throw out an opinion but no amount of talking, or not talking was going to get them out of the endless cycle of reset, fail. They had to accept they were powerless and start building up from the bottom, which is what appears to be happening now.

The dressing room became increasingly tense with players struggling to explain what was going on. How do you really answer a question with no real answers anyway? Coach Mike Yeo also found himself facing tough questions and the speculation that continued losses may result in his dismissal. If that isn’t a recipe for disaster I’m not really sure what is. With last night’s win came a few small laughs and even a joke out of Clayton Stoner that the team is now undefeated for the new year although a cloud of caution still hung over the press conferences and interviews deep in the belly of the ‘X’ following the contest.

I write this as a simple reminder that sometimes there aren’t any easy fixes or answers and that even when the solution seems simple, the answer is not always as straightforward as it first appears. I believed I could fix my iPhone by getting it back to basics, as I’m sure the Wild believed they could get their team back on track by prescribing to their system. The thing is though, with so many moving parts, like in my phone, a team is only able to control so much before they have to take a deep breath and wait for things to start clicking again.

My iPhone ultimately took some professional help to get back online and even as I type this I’m still not sure whether or not it’s going to come off of life support anytime soon. I’ll go so far as to say the Wild aren’t quite out of the woods just yet either but they are slowly showing signs of intermittent life, something that should make all Wild fans breathe a little easier for the time being.

As we move through the next few games beginning with the Capitals and Kings – two teams known for being ruthless when they want to be – remember that any frustration you’re feeling is probably being felt ten-fold on the bench and while their performance may not be without error or even pretty, it will be a genuine effort being put forth by a team that truly cares about its fans and the state of Wild hockey.