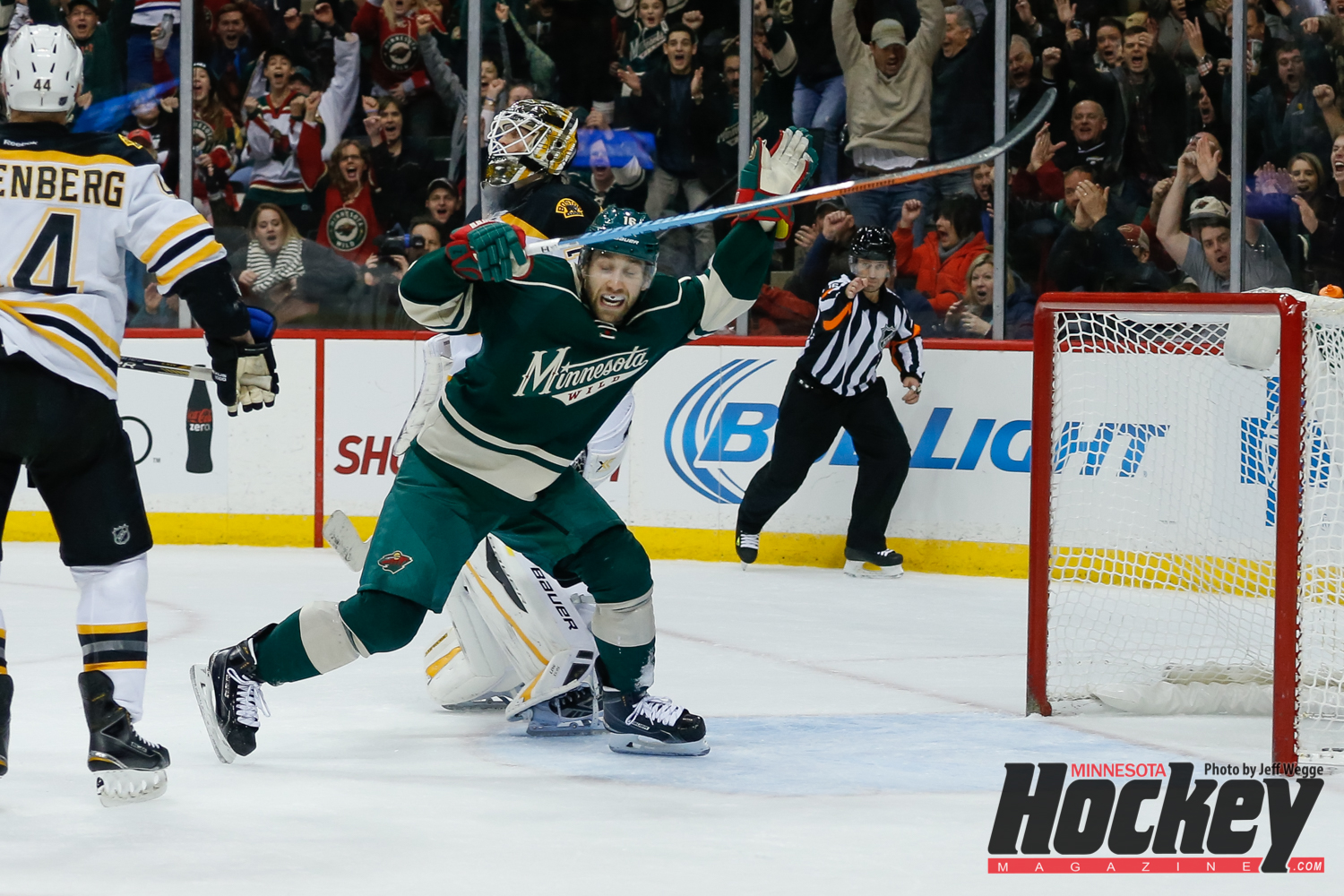 SAINT PAUL — If there was a single word that could describe the Wild’s effort tonight, it would be “response.”

Coming off a disappointing 5-3 loss in Chicago, Minnesota’s response to each situation throughout the 60-plus minute night defined their game. Though the Wild forced overtime, they fell 3-2 on Loui Eriksson’s goal 2:30 into the extra session, earning a point on the night.

Looking to rebound from Tuesday night’s loss, adversity seeped in quickly. Just over five minutes into the first, the Bruins took a 1-0 lead as Carl Soderberg netted a rebound from the slot as Wild netminder Niklas Backstrom was stuck outside the far post.

But the Wild quickly responded as Kyle Brodziak scored his fourth of the season 29 seconds later on a drag-and-snipe goal, beating Bruins goaltender Niklas Svedberg. Though the Wild drew even, the Bruins took a 2-1 lead into intermission as Patrice Bergeron netted a knuckle puck blocker side from above the circle, near the boards.

Whatever was said in that intermission lit a fire within the Wild. Though they didn’t score in the second, they put together one of their strongest middle frames in recent weeks, outshooting the Bruins 20-5.

The Wild remained tenacious throughout the game, forcing overtime and earning a crucial point, but once again, how they respond to the outcome will be key.

“It’s a fine line between trying to find positives and trying to build your game, to build our confidence and to build that winning attitude,” Yeo said. “And between, not being satisfied, not accepting losing and not getting the result that we want. So we have to try to walk that line.”

This narrative isn’t entirely new. The Wild has been alternating wins and losses for several weeks now. In fact, the last time Minnesota won back-to-back games was Nov. 24 with a 4-1 win against Florida that capped a three-game win-streak.

Pominville noted that the issue comes down to confidence.

“Sometimes when guys are going through a tougher stretch, you tend to cheat a little more. That leads to us getting caught and giving up more chances than we usually would,” Pominville said. “But tonight I thought we were pretty solid. It has been tough. When you’re in those tight games you battle back, it’s just finding ways to lose instead of finding ways to win. Good teams right now find ways to win. We’re struggling to find ways to win.”