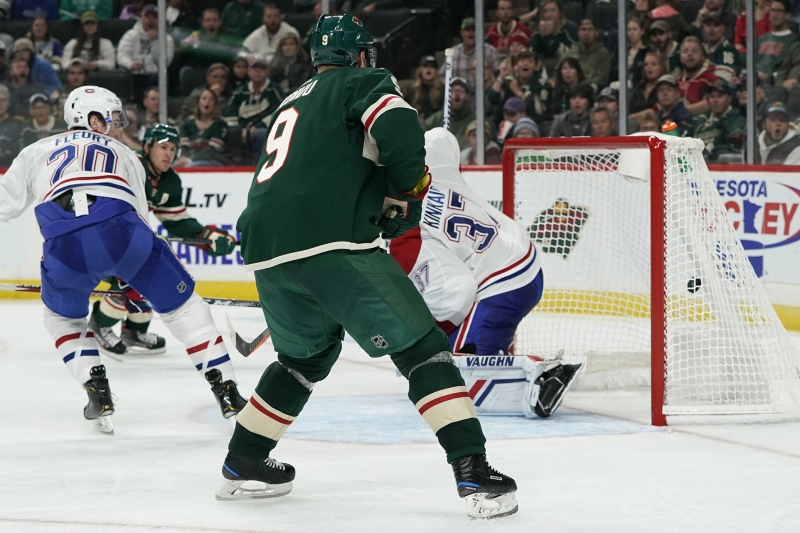 Minnesota forwards Zach Parise and Mikko Koivu watch Parise’s game-winning shot hit the back of the net in the third period of the Wild’s 4-3 win over the Montreal Canadiens on Sunday night at Xcel Energy Center. (MHM Photo / Rick Olson)

ST. PAUL — For the first couple weeks of the season, the Minnesota Wild had played by the same script. Give up multiple goals in a short span of time, get down on the scoreboard and get down on themselves en route to a checkmark in the loss column. Rinse and repeat.

That pattern ballooned into a 1-6-0 start which prompted a players-only meeting following a shutout loss in Montreal.

As the team returned to St. Paul for their second home game of the season on Sunday, also against the Montreal Canadiens, the Wild seemed to repeat the pattern with a 2-1 deficit in the second period thanks to goals 16 seconds apart.

But the Wild weren’t deterred.

“It was a different feel of the game for us,” said forward Jason Zucker. “It wasn’t like we were playing poorly, and it was just a matter of time until they scored. We were playing really well.

“We just stuck with it.”

The Wild started doing things they hadn’t this season, in a good way. They didn’t collapse after the quick goals. They entered the third period in a tie game. They scored four goals for the second time this season (the other was the 7-4 loss to Pittsburgh in the home opener). They even scored off the rush for a highlight-reel game-winner off Zach Parise’s stick.

All these things helped lift the Wild to a 4-3 victory over Montreal at home for their second victory of the season. Perhaps most importantly, aside from the win, was stopping the bleeding after those two quick goals against. It’s something that’s happened in nearly every game, and coach Bruce Boudreau has talked about it with his team.

“So when they (Montreal) scored the second goal, I think determination was there that this isn’t going to happen again,” Boudreau said. “We’re not going to let it happen again. And they fought back. It was huge to get that goal at the end of the period.”

That was Marcus Foligno’s goal with 12.9 seconds left in the second period to tie the game, 2-2.

The Wild faced a second deficit when the Canadiens came out strong to start the third period in the 2-2 game. After a 5-0 shots-on-goal advantage in the first three minutes, Phillip Danault put Montreal in front again with his second goal of the game for a 3-2 lead.

“We still liked the way we were playing, and it was still a game,” Parise said. “The game wasn’t over.”

Through the first seven games, the Wild consistently scored two goals a game while giving up an average of four goals per game. For a win this time, their offense needed to keep the pressure on and score. That was part of the script that changed, too.

Though the Wild only registered 5 of their 33 shots in the final 20 minutes, they made the most of opportunities. Already with a power-play goal in the game thanks to Zucker giving the Wild a 1-0 lead, the Wild had the man advantage with 11:29 remaining in regulation. Brad Hunt blasted a slapshot from the circle into the net to tie the game up at 3 a mere 6 seconds into the power play in the third.

Boudreau said he loves seeing the emotion on the faces of his players, “especially when it’s good emotion.”

“When everybody was going over to Huntsy after he scored that goal, you could see that they were pumped up about that,” Boudreau said.

The Wild stayed focused on breaking the tie, responding with Parise’s goal a few minutes later. 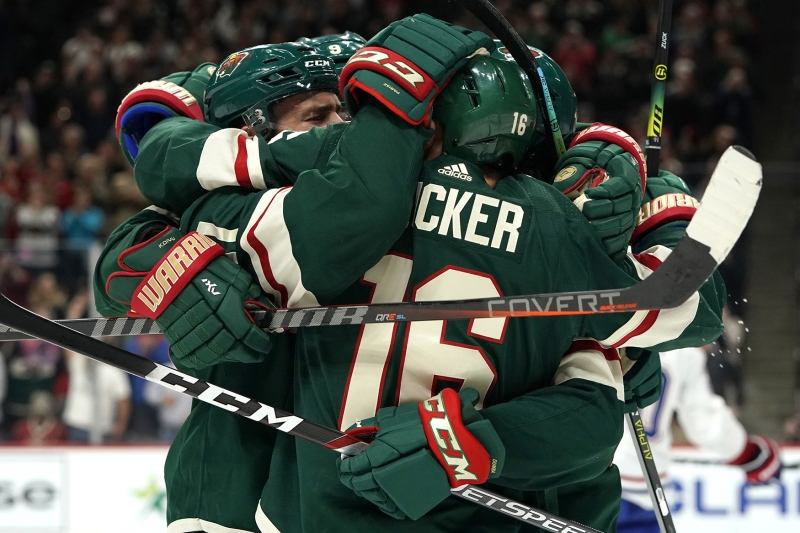 The play started with a clean exit from the Wild’s own zone, according to Parise, something he acknowledged they haven’t done a lot of this season, which would explain the lack of scoring chances off the rush. Zucker, skating on a line with Parise and Mikko Koivu, said he had time to make a play and either feed the puck to Hunt or try to feed it through.

Zucker fired a pass across the ice toward Parise as he enclosed on the net. Parise deflected the puck into the net for the 4-3 lead. That pass through the zone was probably the hardest, in terms of speed, that Zucker said he’s ever made.

“I still don’t know how he did it,” Zucker said, of Parise finishing the play. “I need to watch the replay, but that was impressive. I had to rip that pass to get it through.”

The relief and excitement washed all over Parise as he celebrated with his teammates on the ice.

“The way things have been going, the time of the game, a lot of losses, a lot of frustration piling up,” Parise said.

His goal ended up as the game-winner and reflected a better trend when it comes to tallying the time between goals. The Wild erased the deficit with a pair of goals in 4 minutes, 17 seconds with 7:06 to play in regulation.

Perhaps it was some hard studying that paid off after the Wild studied video the day before, focusing on their turnovers and bad passes. The Zucker-to-Parise play certainly was the opposite of what the team has seen and done so far.

“Tape-to-tape passes create speed,” Boudreau said. “If you can pass tape-to-tape, it has the illusion that you’re skating a lot faster because I’ve never seen a guy skate faster than a puck.”

With so much not going right for the Wild to start this season, one game is still just one game in the first couple weeks of an 82-game season. The question on the minds of many Wild fans after Sunday’s victory might be: How can the team sustain this glimmer of success they had against one opponent to earn one important, confidence-boosting win?

“We need to remember this feeling,” Zucker said. “This feels great. It’s awesome to have a win.”