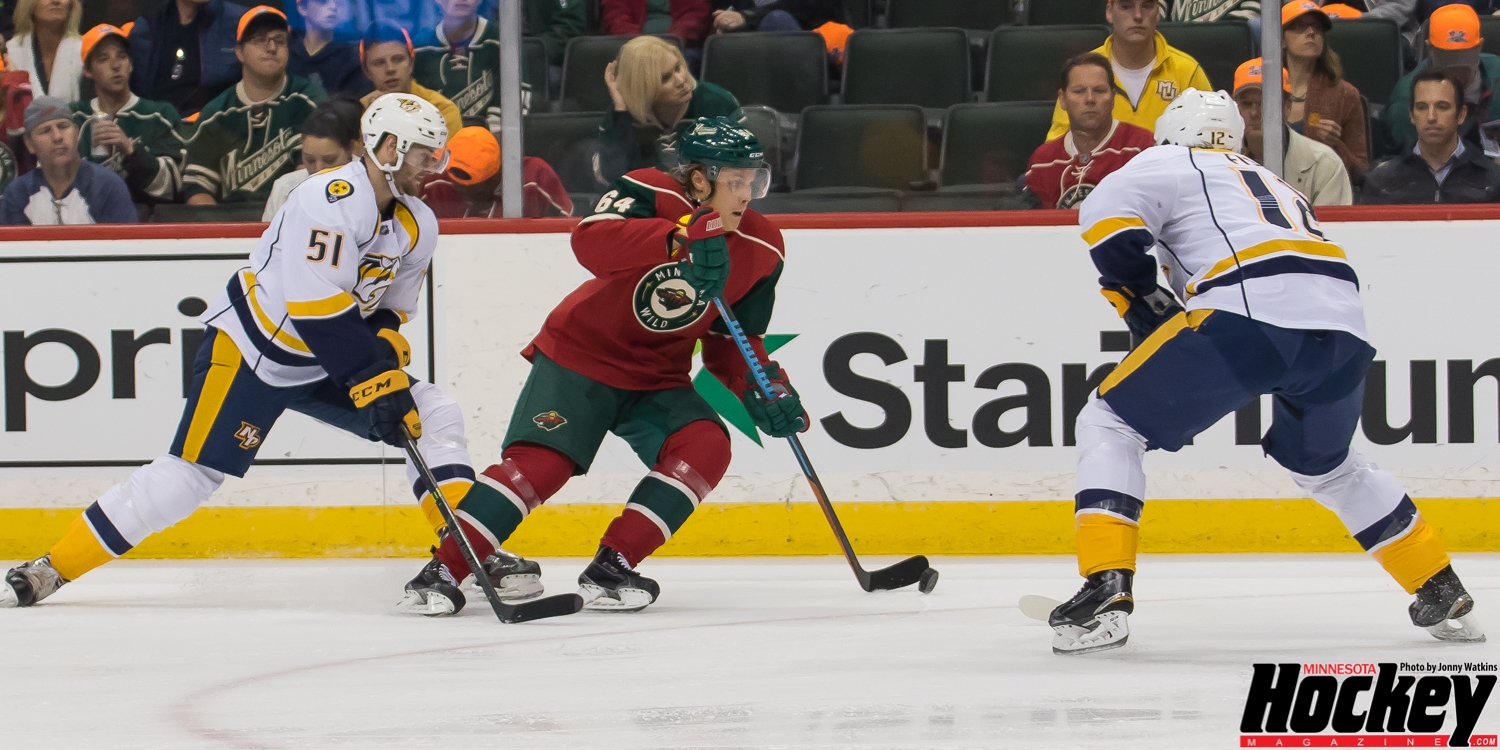 Center Mikael Granlund and his Wild teammates are struggling to find the back of the net. (MHM File Photo / Jonathan Watkins)

Nashville – The Wild are in a lot of pain these days for a team that went into its 45th game with the most points in franchise history.

Minnesota suffered its fourth loss in a row Saturday, a 3-0 decision to a Nashville Predators team that had lost its previous five games.

The Wild were unable to figure out Nashville’s goaltending, a bit of a surprise because regular Preds starter Pekka Rinne had the night off. Instead, Carter Hutton stood tall in the net, finally raising his save percentage above .900 this season.

The Wild had plenty of early chances and later outshot the Preds 13-5 in the second period, yet eventually extended their stretch of scoreless periods to six.

“Two games, no goals,” muttered forward Mikael Granlund. “The fact is, you can’t win the hockey game if you don’t score.”

It seemed that Wild players were at least focusing on shooting the puck, with the possible exception of Thomas Vanek and his dazzling but perhaps overused ability to pass.

Vanek had zero shots on goal compared to a combined 15 for defensemen Marco Scandella and Ryan Suter and forward Jason Pominville. Charlie Coyle, Mikko Koivu, Justin Fontaine and Matt Dumba each registered no shots on goal.

“That’s the tendency when you’re pressing,” Wild coach Mike Yeo said. “The tendency is to try to find a prettier play or a nicer play or the sure play for a goal. We’re trying to make the extra play to guarantee the goal, and in the meantime we’re missing a lot of opportunities.”

Thanks to a goal by ex-Wild forward Eric Nystrom, who deflected a point shot by Shea Weber past Devan Dubnyk just 1:24 into the first period, the Wild were trailing early in this one.

“We had a good start, too,” Yeo said. “But that’s kind of been the story: We’re chasin’ all game, every game right now.”

The only goal they yielded in a 1-0 loss to Winnipeg 24 hours earlier was scored just 3:07 into the first period.

A power-play goal in the third period gave the Predators a 2-0 cushion and they added an empty-netter, which was enough against a team with five goals now in its past five games.

“It is frustrating,” Granlund said, noting that it is time for the Wild players to take a deep breath. “We just need to get better and we need to change this track quickly.”

Yeo, whose team has a 22-15-8 overall record, admitted to the same frustrations.

“We have to use this stretch, as bad as it is, to make sure that we dig in and get a little bit stronger in our game,” he said. “If we do that, then the results will follow.”

Now the Wild must attempt to regroup in upcoming back-to-back road games against Anaheim and Los Angeles.

“It’ll come,” Suter said. “We’ve got guys that have scored a lot of goals in there.”