Minnesota stands firm at No. 18, picks up power forward prospect. 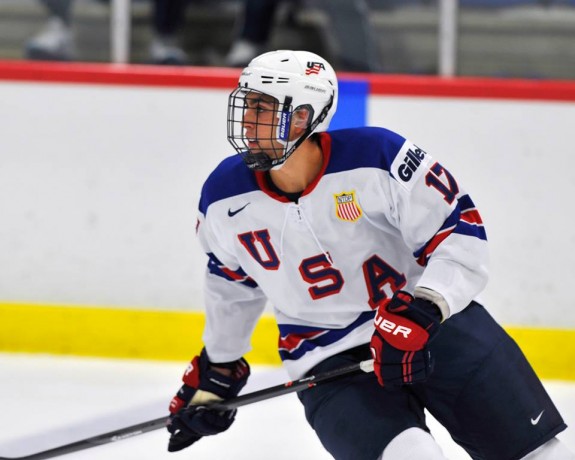 Minnesota stands firm at No. 18, picks up power forward prospect.

As the Minnesota Wild’s turn at the NHL Draft podium drew near on Friday night in Philadelphia, reports were rampant that GM Chuck Fletcher’s phone was ringing off the hook, so to speak. But any offers Fletcher may have received were not enough to dissuade him from taking the stage; at least not with the United States National Team Development Program’s Alex Tuch still on the board.

Minnesota selected the 6’3″, 218 pound C/RW with its first-round pick (No. 18 overall) in the 2014 NHL Entry Draft. The Boston College commit entered the draft as the top-rated American, and No. 12 overall, among North American skaters in NHL Central Scouting’s final rankings.

“We are very happy to add Alex to the Minnesota Wild organization,” Assistant General Manager Brent Flahr said in a statement released by the team. “He’s a big strong winger with quality hands and an NHL shot. We feel that he has tremendous upside and we are very excited to add a potential power forward to our group of prospects.”

Tuch registered 64 points (29-35–64) to go along with 70 penalty minutes in 61 games for the USNDTP under-18 team last season. The Baldwinsville, NY native’s seven game-winning goals and plus-35 rating tied for the team lead in both categories.

“Alex is a big body and that’s something you can’t teach,” Central Scouting’s Greg Rajanen told NHL.com’s Mike Morreale prior to the draft. “He’s got some grit to his game and is good around the net, is physical … if you’re looking for a power forward it’s Tuch, so it’s a matter of team needs at that slot.”

Many labels have been applied to the Wild over the years, but gritty and physical are among the rarest. If Tuch develops as Fletcher and Flahr hope, the Wild will have addressed those needs while adding a skilled and sizeable young forward to an increasingly deep system.