Wild Take a Step Back 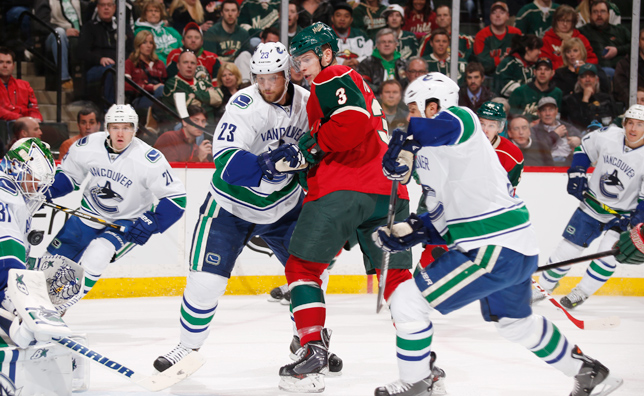 SAINT PAUL—Coming off of a solid come-from-behind road win in Detroit on Sunday, the Wild was presented with an opportunity to come home and face a team beneath them in the standings and win a game to put some distance between them and those trailing them in the wild-card playoff chase.

Instead, Minnesota allowed five Vancouver goals on just 19 shots and had all sorts of trouble putting the puck past Canucks’ goaltender Eddie Lack in Wednesday’s 5-2 loss to its former Northwest-Division rivals at Xcel Energy Center.

“In Detroit [on Sunday] we talked about amping up the urgency level and I felt tonight it slipped back a little bit,” Minnesota coach Mike Yeo said. “You could see that, last game, there was another level to our urgency.”

The Canucks entered the game in desperation mode, essentially playing for their playoff lives. With Wednesday’s win and now 78 points, 10th place Vancouver closes the gap on eighth-place Phoenix to four points and pulls within one of the Dallas Stars with just eight games left on its schedule.

Minnesota failed to earn at least a point for the second straight game at home after snapping a 10-game home points streak in Saturday’s loss to the Red Wings. The Wild hold steady at 85 points to maintain a slim three-point cushion over the Coyotes and stay a half dozen ahead of Dallas, both of which were idle on Wednesday.

Vancouver assumed control of a 1-1 contest in the second period, scoring twice on goals by David Booth and Zack Kassian to carry a 3-1 lead into the third. it all began when Minnesota’s Jared Spurgeon fanned on a cross-ice pass attempt to Jonas Brodin and Booth pounced on it between the circles, scoring his second of the game and eighth of the season at 11:57.

“I looked up to make a pass and … just felt it roll off the heel of my stick and, too late, bad play by me,” Spurgeon said.

Vancouver extended its lead with just under a minute to play in the middle stanza off of a Brad Richardson faceoff win in the Minnesota zone. Kassian picked up the puck in the left circle, spun off of a Charlie Coyle check and fired through a screen for goal No. 12 of the season.

Sandwiched between them at 14:49, the Wild’s Zach Parise raised his arms in the air thinking he had scored when he slapped the puck under and behind Lack. But Canucks’ defenseman Alexander Edler swooped in and plucked the puck off the goal line to make what became the save of the game.

“We’ve got to score, our line in particular,” Parise said of his line with Jason Pominville and Mikael Granlund which was shut out after combining for 45 points (18-27–45) in 17 games leading up to Wednesday’s tilt. “We had some good chances, some good looks and we’ve got to be better; we’ve got to score.”

“They capitalized on their chances pretty good and we just couldn’t put the puck in the net,” Wild captain Mikko Koivu added. “That’s the difference tonight, I think. When you fall behind like that, it’s tough to get the momentum back.”

After allowing three goals on just 12 shots through 40 minutes, Kuemper was replaced by Ilya Bryzgalov to begin the third period and he surrendered Vancouver’s final two goals while facing seven shots.

Kuemper was last pulled from a game when he was replaced by Niklas Backstrom on Jan. 30 in Colorado.

Minnesota has allowed just 35 shots on goal over its last two outings but eight of them have crossed the goal line for a miserable .771 save percentage.

But the team’s coach and its captain understand there is more to the problem than who happens to be standing in the crease.

“I’m not saying we can’t be any better between the pipes but, at the same time, there’s some quality chances that we’re giving up,” Yeo said. “I know it’s not just about the shots, I know that our team has another level to our defensive game, that’s not there right now.”

“It’s tough to find a reason right now why we didn’t score but, obviously we’ve got to work on that,” Koivu said. “But you can’t allow five goals either. We’ve got to be better in front of our goalie and try to make it harder for [opponents] to score those goals.”

The Wild nearly grabbed the game’s first lead with 4:29 to play in the first period when Koivu drove along the wall behind Lack and slipped a backhand pass by Vancouver defenseman Kevin Bieksa to Matt Moulson at the doorstep. But Lack made a huge glove save which became magnified just eight seconds later.

Off the ensuing draw, Canucks’ winger David Booth chased down a puck in the Minnesota zone and his shot from the right faceoff dot split the legs of Wild defenseman Jonathon Blum and beat Kuemper at the 15:39 mark making it 1-0 Vancouver.

But the Wild responded less than two minutes later with Koivu playing a key role once again to register his 17th point (2-15–17) in his past 17 games.

Koivu’s bank pass from the neutral zone hit Charlie Coyle just as he crossed the Vancouver line and he let go of a blistering wrist shot from the top of the left circle which eluded Lack’s outstretched glove for his third goal in three games.

The goal comes on the heels of Coyle’s big weekend against the Red Wings when he followed up his penalty-shot goal on Saturday with another goal, a plus-2 rating, three shots and a game-high five hits on Sunday. Prior to his current streak, Coyle had never scored in back-to-back NHL games.

Things don’t get any easier for the Wild moving forward. In fact, the road ahead gets much tougher with games at St. Louis, Phoenix and Los Angeles on Thursday, Saturday and Monday, respectively. The Blues have won eight straight meetings against Minnesota.

“We feel kind of down on ourselves right now from [the Vancouver] game,” Parise said. “We have to shift our mindset to tomorrow because we know it’s going to be a tough game and we can’t lose two in a row right now.”