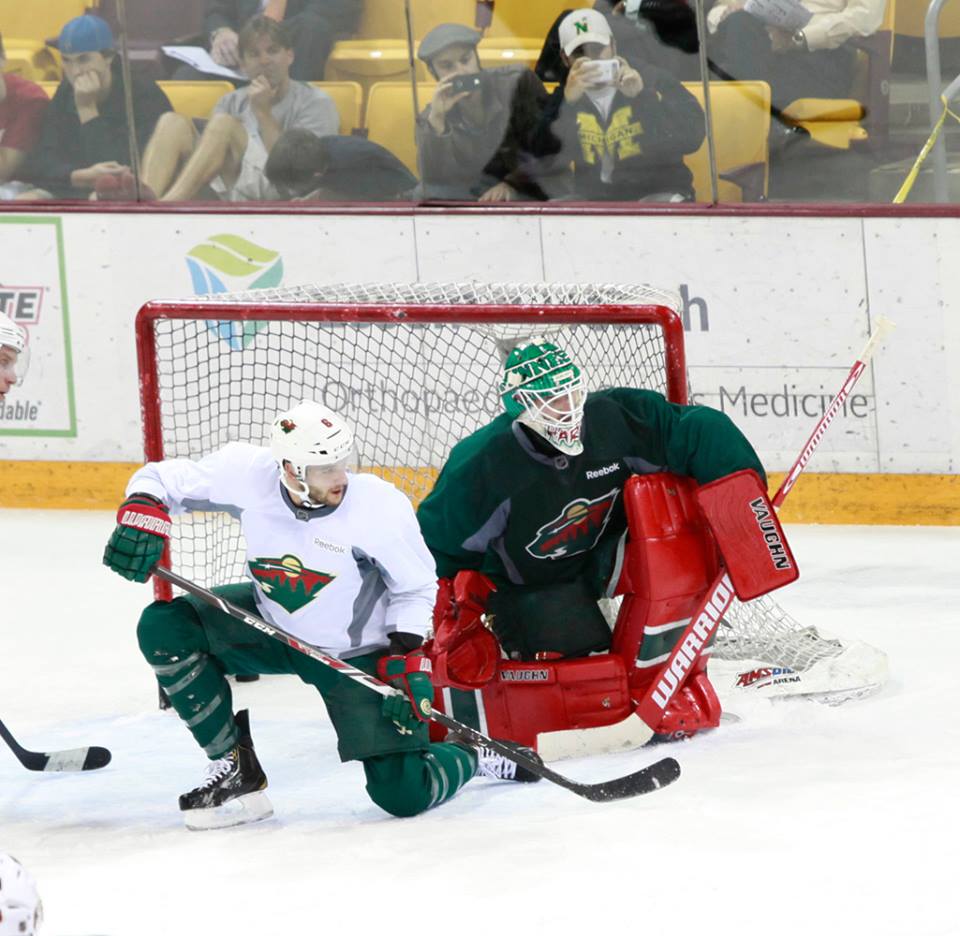 Northland hockey fans were given a special treat Tuesday morning at Duluth’s Amsoil Arena as the State of Hockey’s home team practiced on the Bulldogs’ ice during their team retreat to the Twin Ports this week.

Support for the Minnesota Wild was strong in the arena and fans showed up in packs to show their appreciation for the NHL club, in addition to members of the UMD men’s hockey team who watched on from the concourse. Wild coach Mike Yeo took note and joked, “I didn’t know today was a holiday!”

“It was a good crowd here today and the guys get a little pressure to be a little sharper in practice when you have some of the boys watching and some of the fans,” added Wild goaltending coach Bob Mason. “They were enthusiastic and gave us a couple of hands, so it was good.”

“It was unbelievable watching them practice. Just seeing what kinds of things they do and work on was good and seeing that they aren’t perfect and make mistakes was cool as well,” said Brenden Kotyk, one of the “boys”—a defenseman in his first year with the UMD men’s hockey program—watching and adding a little pressure to the practice. “Watching guys like Parise, Pominville, and Cooke was just an unreal experience.” 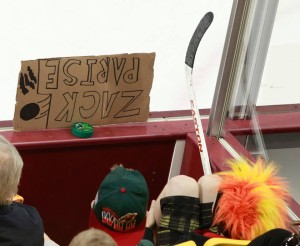 “You can’t say enough about the state of hockey,” Wild goaltender Josh Harding chimed in.“Coming here with the road tour and now with this, you realize that there are fans not just in Minneapolis/St. Paul but all across the state. We have the best fans in the world and I’ll stand by that, especially seeing the fans come out today and cheering, and how excited the kids were.

“This is what hockey is all about and this is one of the things I cherish about being a hockey player.”

While fans enjoyed the practice and the players enjoyed the bonding time, the very real fact that home opener is days away against a very tough LA Kings squad was not dismissed.

“This has been a great trip but the bottom line is we have to be ready on Thursday,” said Coach Yeo. “I know that they [the Kings] are good. I know that they’re big and they’re skilled and they play a very good team game. Bottom line is, especially at this time of year, but for us pretty much all the time, our focus is much more on ourselves than it is on them.”

“To have a full training camp and actual home opener is very exciting and we’re looking forward to it,” said Wild defenseman Ryan Suter. “We know LA is going to come in there and be ready to go so we have to make sure tomorrow we have a good practice day and match them.”

The Wild seemed to have found the perfect mixture of fun and hard work as they concluded their trip to the Duluth area with Tuesday’s practice; a mixture they can hopefully translate into an exciting and fan-thrilling season at the X.