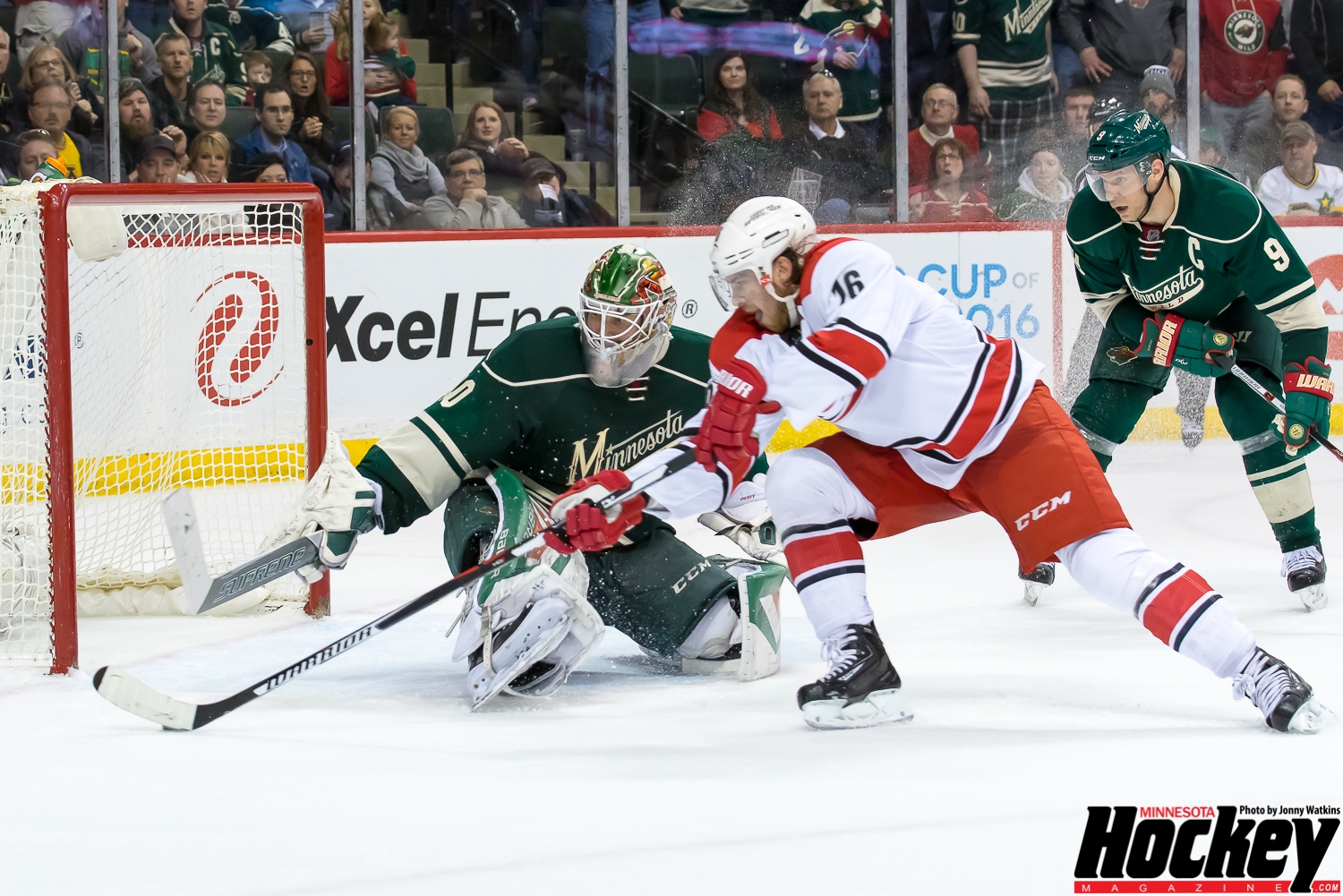 Coming off road losses to Ottawa and New Jersey, Minnesota entered a matinee game against the Carolina Hurricanes needing a jolt of positivity.

Then Carolina tied the score 2-2 with 6:51 remaining in the third period to force overtime, and Hurricanes forward Elias Lindholm sprung himself free with a spin-o-rama move in the final seconds of overtime.

Devan Dubnyk made the save on Lindholm, however, and after shootout goals by Charlie Coyle and Zach Parise plus two shootout saves by Dubnyk, the Wild escaped the sold-out Xcel Energy Center with a 3-2 victory in front of 19,044.

The 100th consecutive sell-out crowd for a Wild home game erupted in cheers at the conclusion, expelling an afternoon’s worth of held breaths from a dramatic 65-plus minutes of play.

Nothing was more dramatic than Lindholm’s late move.

Dubnyk said he was aware the clock was ticking down and simply tried to shut out everything but the play in front of him.

“You just try to keep in focus and bear down as much as you can,” he said.

The two points inched Minnesota within a point of Colorado for eighth place in the Western Conference after 72 games.

“Getting one point’s not good enough for us.” Dubnyk said. “So, a lot of emotions there.”

Minnesota got goals from David Jones and Jason Zucker to twice take one-goal leads in this one, but both times Carolina came back to tie.

It was that kind of a tight game.

“Every play’s a big play,” Torchetti said. “Everyone knows it. It’s good for our team to play those types of games.”

Torchetti benched forward Thomas Vanek for this game, then was forced to play without injured forward Ryan Carter through much of the late going. Jones stepped up, and Zucker scored his first goal since Feb. 17.

“It’s always nice to get a goal,” Zucker said, “but more than that, it was nice to help the team get a win tonight. It was two very needed points.”

After four losses in their previous five games, the Wild desperately needed success on Saturday.

“We stuck with it,” Coyle said. “In our previous games we would have been frustrated in our game when things weren’t working, but we stayed within our structure. That’s what’s going to get us scoring chances and goals.”

Torchetti called it a game of “good team structure” that went well because his team was often on the winning side of puck battles. That allows Torchetti to relax a bit and not worry about peripheral matters.

And getting two points that very likely might prove significant at season’s end.