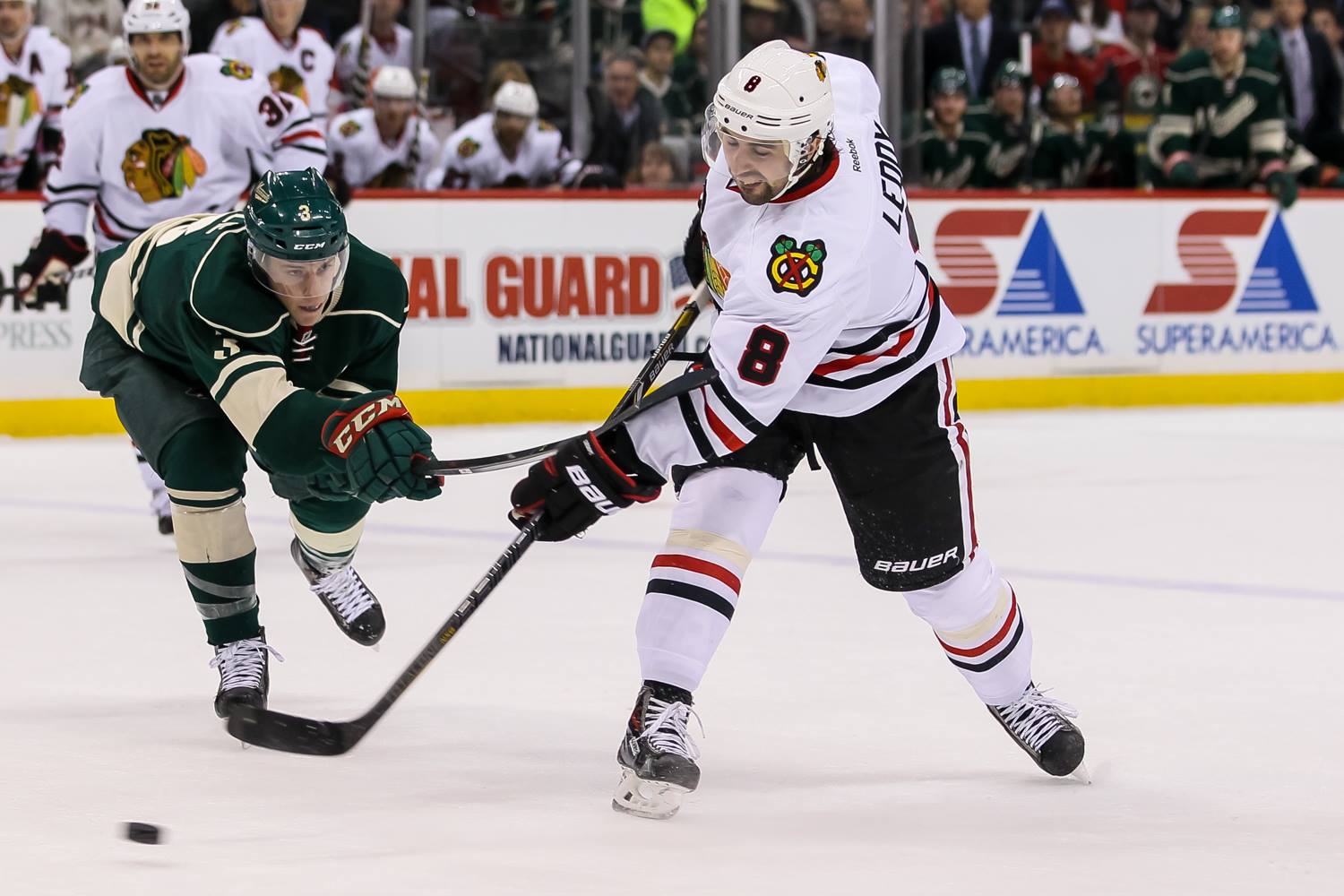 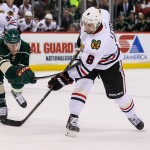 When it comes to the NHL there is an endless ambition in the West. Teams are looking to constantly improve year-in and year-out. That is especially true this season where the lopsided nature of inter-conference play has a Western team which would, points-wise, host a playoff series in the East instead of sitting home.

There is something about the style and physical play that comes from the NHL Western Conference. Every team has injuries at this time of the year.  Every team is beating each other up 60 minutes at a time.

Everyone wants to be the best. In fact, over the course of an 82 game schedule, there are multiple opportunities for players and teams to prove to one another who ends up on top.  For Minnesota, the most recent stretch of 3 games in 4 days against Chicago, Columbus and San Jose has been one such opportunity for the Wild.

“You’re not going to play perfect against them,” Minnesota head coach Mike Yeo said Thursday about playing the Blackhawks, who currently reside atop the Western Conference. “(Chicago) finds ways to make plays.”

It happened. The same thing did against Columbus, which saw the Blue Jackets shut out Minnesota 4-0 a day later, and San Jose. In that game the Wild gave up a season-high 38 shots on goal to the Sharks while putting up a season-low 13.

“They make it tough on a goalie,” said Minnesota goaltender Josh Harding, who had combined for 38 saves in his two previous games. “You get to feel the puck, know it’s going to come from everywhere. I’d almost rather have those games sometimes than the ten shot ones with three spread out here and there.”

There are several similarities the Wild, currently tied with St. Louis for second in the Central Division with 41 points, share with these three clubs that stretch across the four-plus seasons of General Manager Chuck Fletcher’s tenure.

While Minnesota had 2009 seventh rounder and former Golden Gopher forward Erik Haula on the big club (he was demoted Monday to Iowa), Chicago has Wild 2009 first-round draft pick and former Golden Gopher defenseman Nick Leddy. (The two did not play together as Haula spent Leddy’s lone season in Dinkytown playing in the USHL.) The bookends of Fletcher’s first draft have much in common, but their NHL path is not one.

Although currently injured, Columbus features the first Wild superstar and attempt to build around in Marian Gaborik.

San Jose, meanwhile, is also entangled with Minnesota’s more recent attempts to better itself. A series of trades in 2011 with the Sharks that sent Brent Burns, James Sheppard and Martin Havlat for Dany Heatley, Charlie Coyle (along with Devin Setoguchi and a pick that became Zack Phillips) helped set the foundation for getting Zach Parise and Ryan Suter in free agency the next season.

But this stretch is not about getting the pieces at one time or another or seeing how they compare against the replacements. It’s about the present.

This stretch is about getting the pieces together so when teams play the Wild they’re also making the comparison.

Starting with the Blackhawks, the team that knocked Minnesota out of the playoffs last year, the Wild came back to win 4-3 on a Marco Scandella goal after Chicago erased a 2-0 lead by scoring three times in a 6:50 span spread between the second and third periods.

“It was tough. Not the usual team to play against,” said defenseman Jonas Brodin, who scored the tying goal, about rebounding against Chicago. “They play hard every time so you have to be ready.”

Playing a fast-paced hockey game against the defending Stanley Cup champions is not easy yet the Wild did just that through most of the game. The effort was described by Yeo as being fifty-seven of the best minutes that the Wild played all season. It came against a team that has lost just six games in regulation.

Three days later Minnesota’s defense led the way in a 3-1 win over San Jose. Harding made 37 saves, including a pair of glove stops on Joe Pavelski and Tomas Hertl in one shift to keep it a one goal game, and the penalty kill stopped all four Sharks attempts.

“We stressed before the game we have to be harder in front of the net,” Ryan Suter said Sunday. “We’ve been getting kind of soft there.”

Winning two different games against top teams – albeit sandwiched by a shutout loss –  in two different ways is important as it is impressive. That’s especially true for a team whose goal differential (+2) trails similar teams by 20 goals. It would be one thing if Minnesota looked in the mirror through this stretch and good goaltending was all it saw.

While the team depends on Harding and his NHL-leading 1.52 GAA, the Wild, like any team over the course of a season, cannot solely depend on one person. Fortunately, Minnesota’s upswing starts up front with the first line of Mikko Koivu, Zach Parise and Jason Pominville.

“They’re sending a message to the rest of the team and it’s a full team effort,” Yeo said. “Nobody quits.”

The trio combined for all three goals Sunday, including two from leading scorer Zach Parise in a game which Minnesota struggled to create offense. The 29 year-old continues to shine while playing through an injury that initially was set to keep him out 2-3 weeks. Instead, Parise was out for three days.

It’s that type of little things, the extra effort, stressing an area of weakness or willingness to lead, which shines down on a team filled with youngsters.

“We look again at that line – Mikko, Zach, Pommer – whose been coming up big for us in big times. They don’t score the tying goal (against Chicago), but they draw the penalty with a great shift. Obviously that second unit comes out and gives them a break,” Yeo said. “The second unit does a great job scoring a goal.”

Whether it is Haula (whose heads-up play set up the team’s first goal), Brodin (scored the tying goal) or the player who has 3 points in his last four games and scored the winning goal against Chicago, Marco Scandella.

For a team that is looking at itself while others are trying to figure out what exactly to make of the Wild, giving back and helping out as Koivu put it is a related cycle.

“You want to give that back to the guys too,” he said. “We need to help (the youngsters) out. That’s the way the league goes and obviously they’re good kids so you want to help them out too.”

Minnesota is looking at where it wants to be as a hockey team with this recent stretch. Playing the defending Stanley Cup champs at home, the Wild’s expansion brothers in Columbus – now in its first season playing in the East – and a perennial contender in San Jose, there is plenty to learn for a team that wants to improve upon last season’s first round playoff exit.

In this stretch, beating Chicago at its own game was the good, losing to Columbus was the bad and San Jose has been the ugly. While harping on consistency that comes with losing against the 12th place team in the Eastern Conference is easy, at the end of the day it is just one stretch. Not everything is pretty.

Like defeating the Blackhawks at home while having to play Columbus the next night on the road. Another stretch in a crowded NHL season – this time seven road games out of eight – is just around the corner.

“We don’t have a whole lot of time to get too emotional about this one to be honest with you. It’s a good win, but we have another test tomorrow,” Yeo said. They’re sitting there waiting for us. They didn’t play tonight. It’s going to be a good challenge.”

The team may be looking to compare itself with the top in the West for when playoff time comes, but that might not matter. Even if others teams don’t, as the season progresses and this stretch ends the sum of all parts, not those teams around the Wild, is what will define the Minnesota Wild’s season.