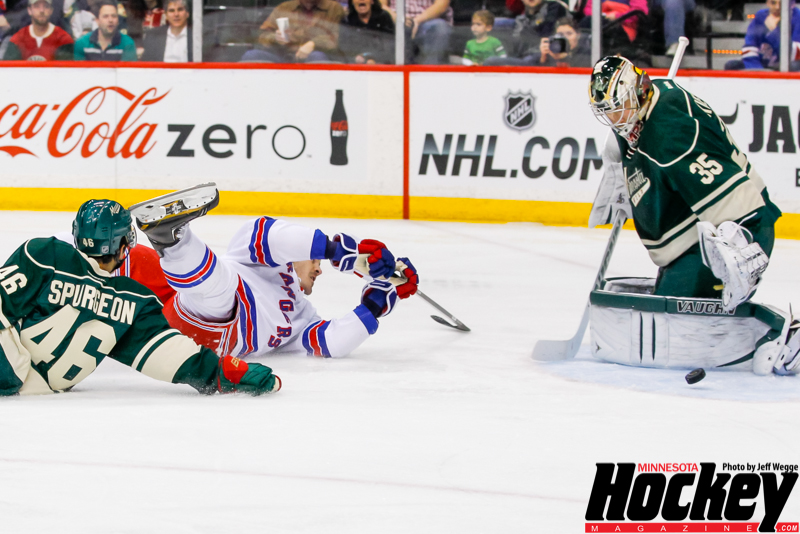 Wild goaltender Darcy Kuemper makes one of his 29 saves in Minnesota’s 2-1 win over the New York Rangers on March 13, 2014 at the Xcel Energy Center in St. Paul. (MHM Photo / Jeff Wegge)

SAINT PAUL—Zach Parise scored his team-leading 23rd goal of the season and Darcy Kuemper made 29 saves as the Minnesota Wild snapped a three-game losing streak with a 2-1 win over the New York Rangers on Thursday night at Xcel Energy Center. Minnesota rebounded from blowing a three-goal lead to the lowly Edmonton Oilers just 48 hours earlier to hand the Rangers their second consecutive loss.

“I have a lot of respect for that team,” Wild coach Mike Yeo said of the Rangers. “They’ve got the goaltending, they’ve got speed, they’ve got skill and they check well, so it was a big win for us.”

The game was tied 1-1 after two periods but the Wild struck early in the final frame to take the lead. After Rangers’ goaltender Cam Talbot stopped Mikael Granlund’s effort from in tight, along with a pair of Jason Pominville rebounds, Parise pushed the puck under Talbot just 1:03 into the third.

“It was a really smart play by Granlund to attack the net, for him to recognize that he had room, and that’s what started the play,” Parise said. “I think at that point of the game we had to start getting some pucks into the crease there and get an ugly one.”

“A guy like Granny typically hasn’t been a guy to take a puck to the net like that,” Yeo said. “Obviously that was a huge moment in the game.”

But the Rangers turned up the heat on Minnesota over the final 18:57 and outshot the Wild 16-8 in the period but Kuemper was up to the task.

When Kyle Brodziak put his team down a man with a delay of game penalty with 3:20 to go Kuemper withstood the New York barrage right up to the final buzzer.

“Can’t let too many games slip away this time of year,” Kuemper said. “Just the way we played was solid; we got back to our identity and stuck with it the whole way.”

The Wild grabbed a 1-0 lead on Nino Niederreiter’s one-timer off a Brodziak feed at 13:08 of the first. Brodziak knocked Rangers’ defenseman John Moore off the puck along the end boards to Talbot’s right and poked it to Niederreiter who slammed home No. 12 of the season.

Talbot stopped 24 Minnesota shots and has allowed just three goals in two starts against the Wild this season, including the Rangers’ 4-1 win at Madison Square Garden on Dec. 22. 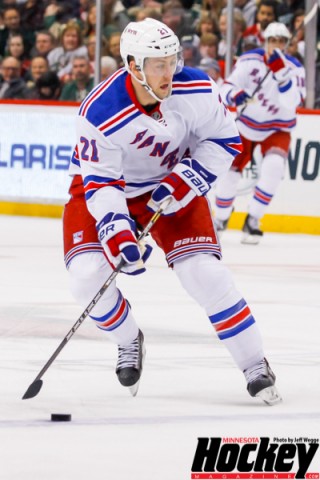 Hastings Minnesota’s Derek Stepan scored the Rangers’ lone goal in in a 2-1 loss to the WIld on Thursday.
(MHM Photo / Jeff Wegge)

Seconds after nearly tying the game with a power-play goal when his shot rang off both the crossbar and left post, New York’s Derek Stepan did just that at 3:19 of the second. The Hastings native carried the puck in from the left point and, using Jonas Brodin as a screen, let a wrist shot go from the top of the left circle beating Kuemper for his 12th of the year.

With the memory of the Edmonton loss still fresh, Parise spoke after the game about the importance of protecting leads as the playoffs near and winning games “the hard way” as was the case against the Rangers.

“Tonight it was a hard game the way they played,” Parise said. “They were in our face all the time through the neutral zone, we didn’t have much tape-to-tape [passes] it was a lot of along the walls, chip it and chase it, but sometimes you have to win like that.”