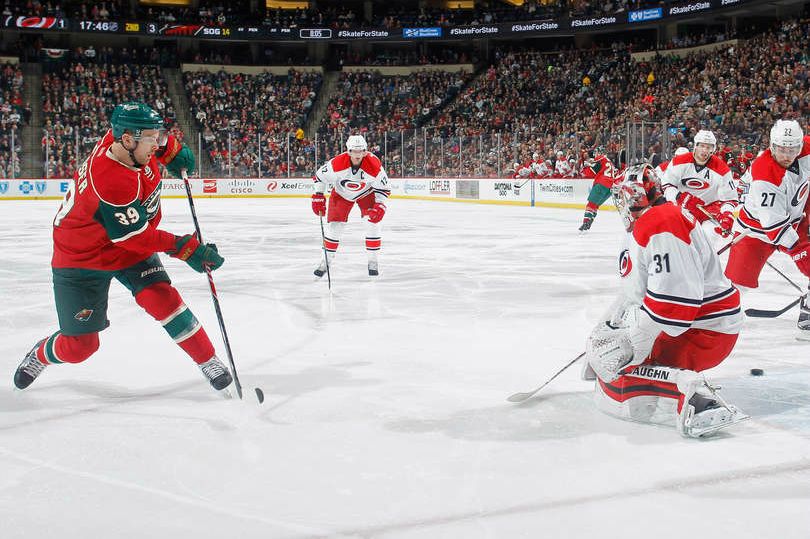 Nate Prosser was one of five with local ties to score for Minnesota in the WIld’s 6-3 win over the Carolina Hurricanes on Saturday night at Xcel Energy Center in St. Paul, Minnesota. (Photo by Bruce Kluckhohn/NHLI via Getty Images)

SAINT PAUL – Early on in the Wild’s 6-3 victory over the Carolina Hurricanes Saturday night, a hat trick appeared inevitable.

Instead, the lone mention of hats might have been a reference to the Gophers’ “Minnesota, hats off to thee.”

With the Gophers men posting a 2-0 win over Michigan at Mariucci Arena, it was a good evening for Minnesota hockey fans.

The Wild’s six goals, coming on just 24 shots including one into an empty net, were backed by another strong effort from Wild goalie Devan Dubnyk.

Dubnyk raised his record with Minnesota to 10-1-1 and the Wild, much to the delight of 19,220 at the Xcel Energy Center, raised their record in their past 10 games to 8-0-2 to tie the franchise mark for longest points streak.

With points in 12 of their past 13 games, the Wild have climbed to a 28-20-7 record for 63 points with 27 games remaining. The 63 points temporarily tied Minnesota for eighth place in the Western Conference, just three points behind sixth-place San Jose, although Calgary and Vancouver played late.

The timing of this streak has been terrific: The Wild now head on the road for games at Vancouver, Calgary and Edmonton.

“At this time of year, it’s all about getting points, and we’re getting them,” Vanek said.

Vanek got the Wild started in the first period, with a bunch of help from Justin Fontaine.

Fontaine’s forecheck created a loose puck, and Mikael Granlund found the puck and an open Vanek to make it 1-0 just 1:15 after puck drop.

Seven minutes later, Fontaine slid a perfect pass to an open Vanek to make it 2-0, and after Schroeder banged a shot past former Wild goalie Anton Khudobin at the 15:31 mark, it appeared Minnesota was in control.

But the Hurricanes outshot the Wild 13-4 in the second period to push back.

“We got the win, that’s the bottom line,” Schroeder said. “And that’s 10 consecutive games with a point, so that’s pretty cool, too.”

Carolina cut deficits of 3-0 and 4-1 to 4-3 in the second period before goals by Haula and Parise made things more comfortable.

“Unflappable,” was the word chosen by Wild coach Mike Yeo to describe his team, noting that a strange embellishment penalty called against Mikko Koivu seemed to give the Hurricanes life.

But, as Yeo said, the Wild did not wilt.

“I think we’re just kind of building our game,” Prosser said. “Each and every game we’re building our confidence, and everyone’s feeling good about their games. We’re doing all the little things right: Making sure we’re paying the price, blocking shots, taking hits to make plays. I think everyone can feel that positivity on the bench.”

Yeo tipped his hat to the play of Fontaine and Schroeder, who have moved up because of injuries to Jason Zucker and Ryan Carter, commenting that both did things “the right way.”

Yeo was obviously relieved to add another win to his team’s record – the Wild will likely need to pick up 31 or 32 points over their final 26 games to make the playoffs – but Yeo was in no mood to celebrate.

“One win doesn’t mean we’re there,” he said, “and one loss doesn’t mean we’re not there. This is all just part of the process right now. We’re finally back in it. We’ve gotten ourselves closer, and there’s still an awful lot of hockey left this year.”