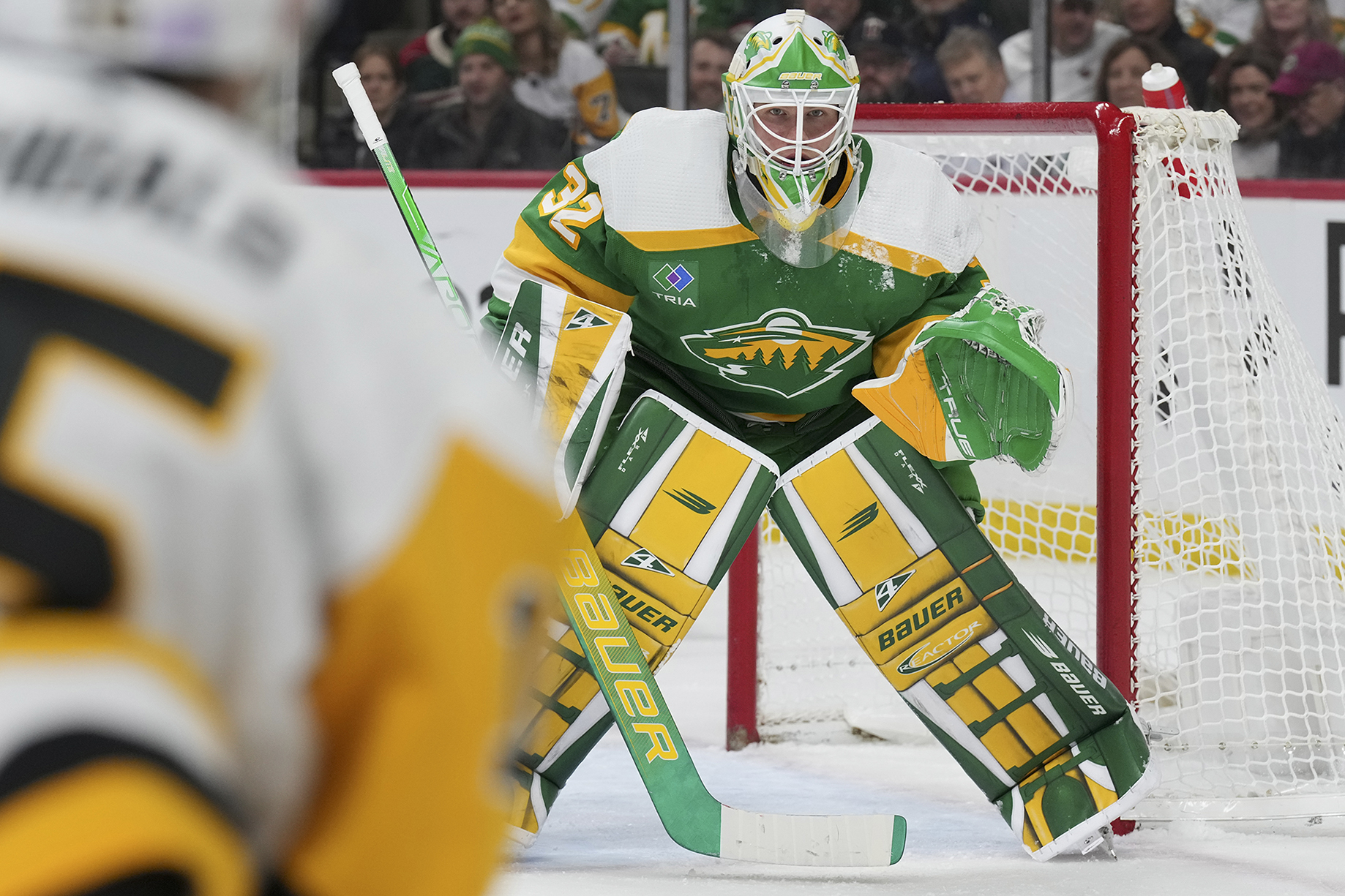 No one is looking over anyone's shoulder but the Minnesota Wild's goaltending situation has become far more balanced than expected in the offseason thanks to Filip Gustavsson's surprising play. (MHM Photo / Rick Olson)

The Wild’s acquisition of Marc-Andre Fleury at the NHL trade deadline last season created what general manager Bill Guerin considered to be a nearly ideal goaltending situation. Fleury, nearing the end of his Hall of Fame career, would split time with veteran Cam Talbot.

The only problem was it quickly became clear that Talbot wasn’t nearly as enthused about sharing the net — or ending up as the backup — to Fleury. The fact Fleury started the first five games in the Wild’s six-game, first-round playoff loss to the Blues only hammered home the point that Talbot was no longer the clear-cut top goalie in Minnesota. 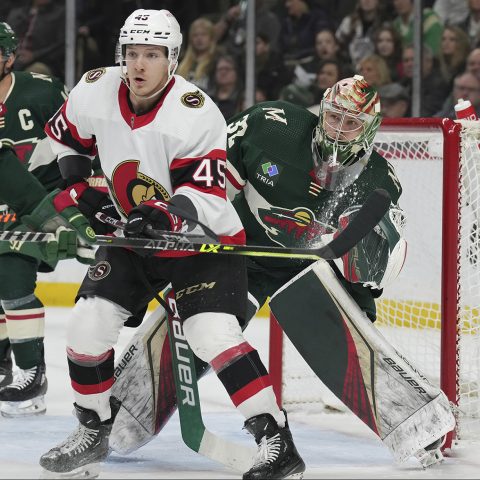 Guerin quickly pivoted from pointing out that Talbot was under contract to dealing him to the Ottawa Senators in mid-July. The one-for-one deal brought back 24-year-old backup goalie Filip Gustavsson in what appeared to be a win for the Senators. Gustavsson, a second-round pick by Pittsburgh in 2016, never played a game for the Penguins before being shipped to Ottawa. He played in 27 games over two seasons, starting 23 times, and went 10-13-3 with a 3.12 goals-against average and a .905 saves percentage.

This included a 5-12-1 record in 18 games (16 starts) with a 3.55 goals against and an .892 save percentage with a bad Senators team last season. Guerin seemed to have decided getting rid of an unhappy Talbot was more important than getting a quality return for him.

That feeling did not change when Gustavsson gave up eight goals in his first two appearances. The now 38-year-old Fleury had gone from being in a position to share the net with Talbot to being relied upon to have to start the majority of the Wild’s games.

Or at least that’s how it seemed.

Forty-three games into the season, the Wild are 25-14-4 with 54 points and comfortably sitting in third place in the Central Division. Minnesota picked up two more points with a 4-2 victory on Tuesday in Washington. Gustavsson made 34 saves in the win and was a primary reason the Wild only trailed 1-0 after one period, despite being outshot 13-3.

Gustavsson’s sparkling performance might have been a surprise a few months ago, but of late the Wild have come to expect that if Fleury is sitting, they will still get excellent goaltending from Gustavsson. He is 10-2-0 in his past 12 starts and has stopped 94 percent of the shots he’s faced. In the past five games, Gustavsson has given up seven goals and never more than two in a game.

“I didn’t have any expectations of how much I was going to play,” Gustavsson told reporters. “I think I started to play good and got more and more opportunities.”

It’s no surprise that Guerin recently pointed to Gustavsson as the player who has surprised him most. “I think he’s played exceptionally well,” Guerin said last weekend. “There was something there I think now that he’s gotten a lot more comfortable here in Minnesota and with the way we play and what not he knows what to expect every night. He’s really been fantastic.”

His performance also has given coach Dean Evason the ability to not start Fleury in nearly every game and wear him out long before the postseason begins. Evason has credited Gustavsson for his calmness and excellent positioning. The Capitals, who outshot the Wild 36-22, had several excellent scoring chances, especially from in close, but Gustavsson was able to stop pucks from sneaking by and continually frustrated Washington with his solid style. 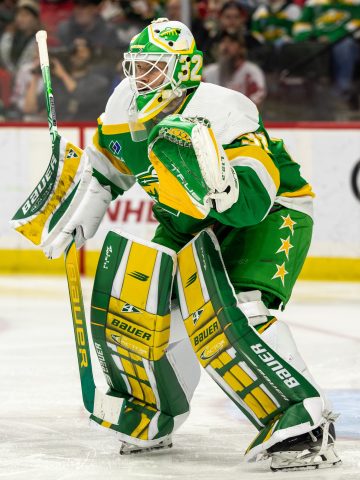 Filip Gustavsson sets up for a shot against the Detroit Red Wings on Dec. 14, 2022 at Xcel Energy Center (MHM Photo / Jonny Watkins)

“We talked about it a lot that when we brought Gustavsson here,” Evason said earlier this month. “We needed him to play a substantial amount of hockey games. The nice thing is that we didn’t just give him those games. He’s pushed to get those games.”

Fleury had stretches where he started four consecutive games twice and three once through early December, but since that time he and Gustavsson have often rotated. Since the beginning of the New Year, they have split starts equally.

Gustavsson will be a restricted free agent after this season and the Wild are going to have to make a decision about when they want to bring up 2021 first-round pick Jesper Wallstedt. Wallstedt, like Gustavsson, is from Sweden and he’s clearly the Wild’s goalie of the future.

Gustavsson’s performance, however, likely has worked him into the Wild’s future plans and, as Guerin said, that is a pleasant surprise.