Pominville, Granlund among those due to heat up offensively 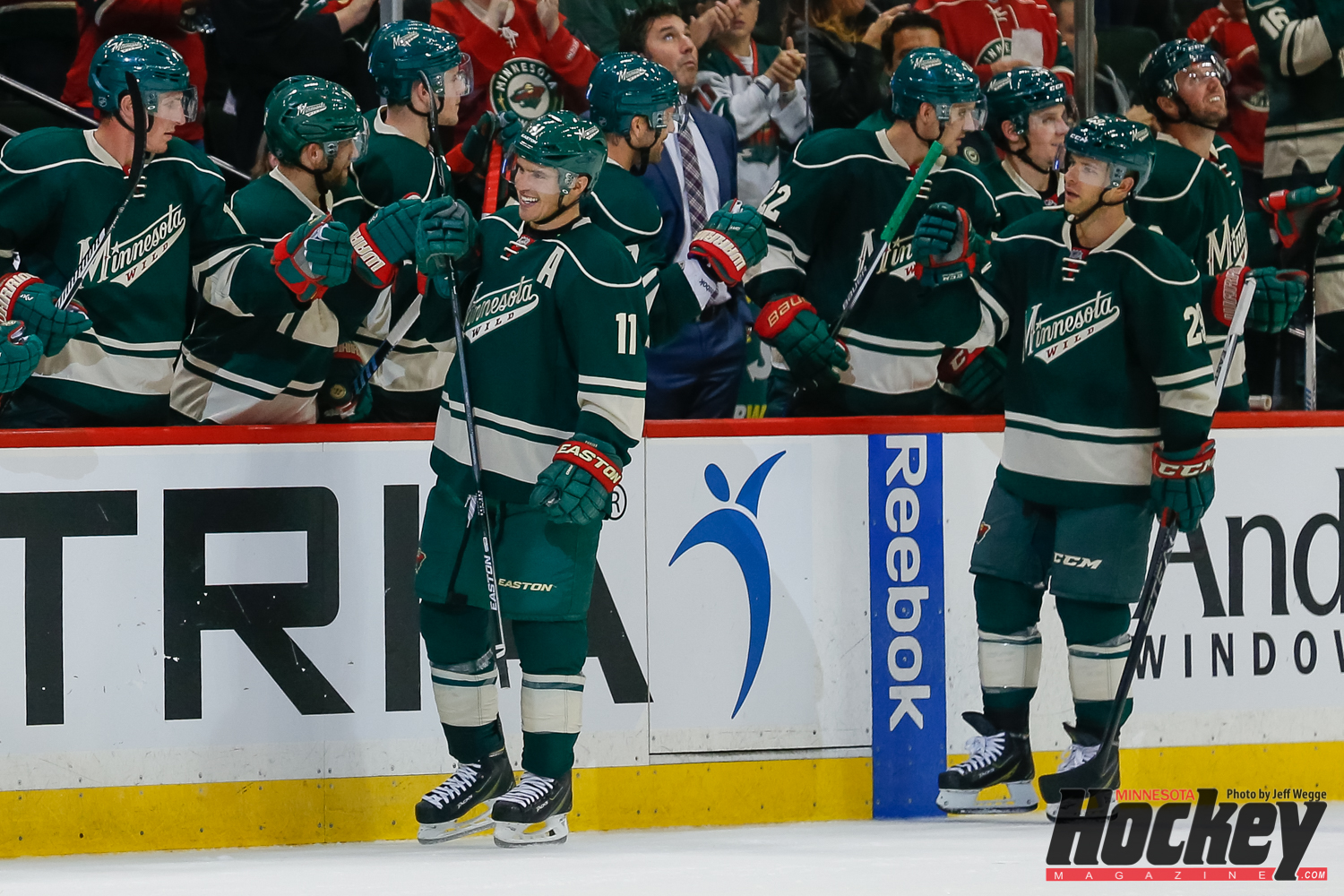 A 30-goal scorer two years ago, Jason Pominville (right) has made a habit this season of celebrating linemate Zach Parise’s goals rather than his own. (MHM Photo / Jeff Wegge)

Pominville, Granlund among those due to heat up offensively

What’s strange through nine games is that the Wild are winning despite a surprising number of guys who aren’t contributing much.

Erik Haula and Jared Spurgeon have zero goals apiece, while Jason Zucker, Mikael Granlund, Justin Fontaine and Matt Dumba each have one.

Those guys are expected to score.

Then there’s Jason Pominville, who came into this season with 237 career goals in 752 games. He nailed the crossbar in the first period of Tuesday night’s 4-3 victory over the Edmonton Oilers, drawing oohs from the Xcel Energy Center crowd of 18,936.

But Pominville has no goals and five assists so far.

The good news: It hardly seems to matter.

The win, concluding three games in four nights and four games in six nights, gave the Wild a 6-2-1 record.

“We’re winning different ways,” coach Mike Yeo said. “We’re not perfect, but when you’re winning games, there’s positives for sure. It was a tough stretch here, but this is how we’ll get better.” 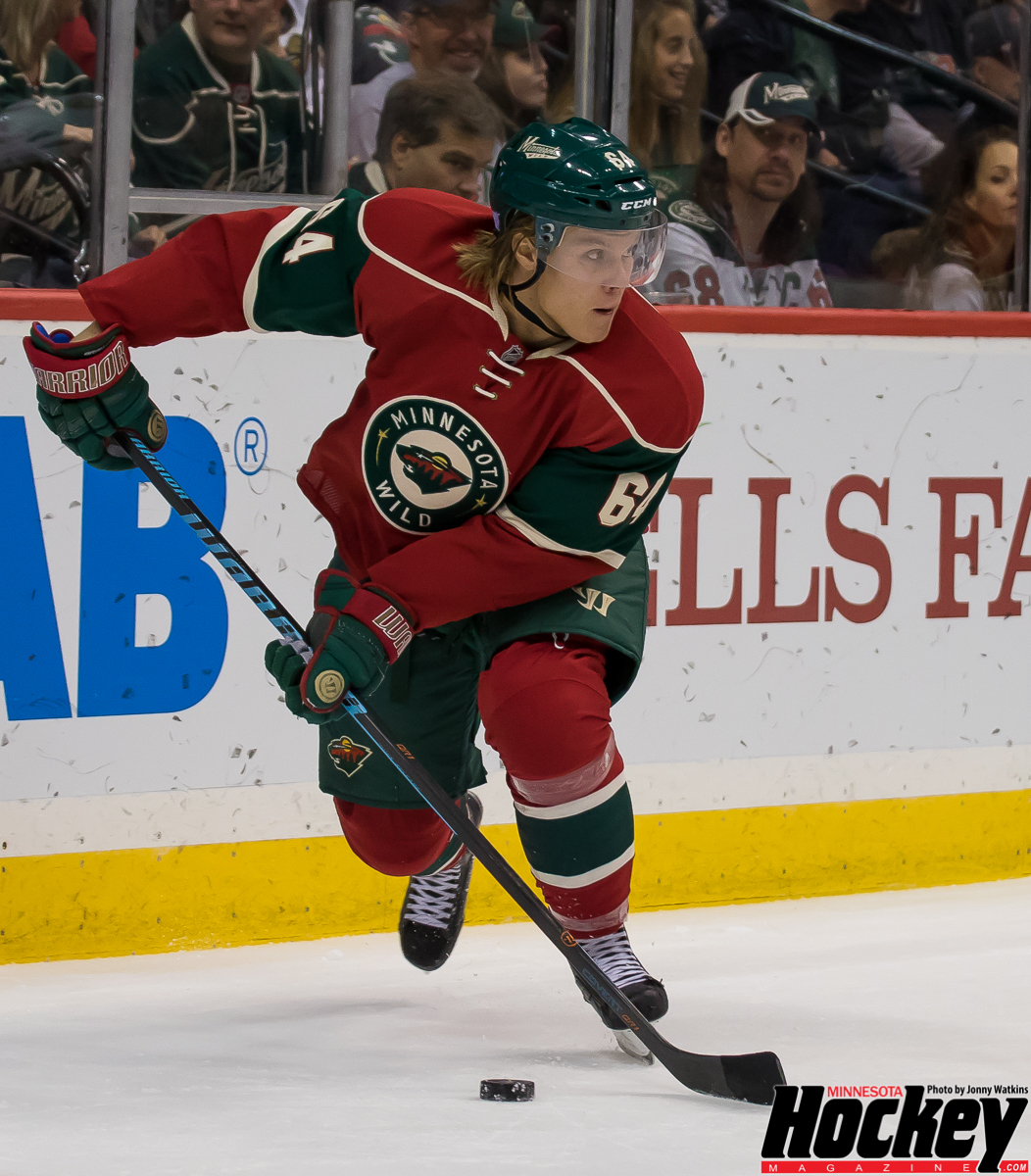 Pominville, who scored 30 goals two years ago and 18 last season, seems to get the brunt of the attention from dissatisfied fans. He and Granlund have just one goal between them compared to seven for their linemate, Zach Parise.

But Yeo says he’s not about to panic.

“Just like everybody, they’re not 100 percent on top of their game,” Yeo said, “but I really felt like tonight was a step in the right direction.”

On this evening, Ryan Suter netted his first two goals of the season while Marco Scandella picked up his first. Then Charlie Coyle, demoted briefly from the third line to the fourth line because Yeo wasn’t liking what he was seeing, scored the game-winner off a pass from Thomas Vanek midway through the third period.

“I just tried to respond in the third there and get back to my game, make something happen,” Coyle said. “It was a good result. It’s nice to be rewarded when you do it, but I’ve got to do it consistently and not get away from it.”

Yeo was asked if he was sending Coyle a message.

Even without many goals from several players, the Wild raised their goal total to 28 in nine games, which ranks in the top 10 of the NHL. Vanek is second to Parise on the team with four goals and also has four assists, while Nino Niederreiter, Mikko Koivu and Coyle each have three goals.

Koivu, who has points in eight of Minnesota’s nine games, extended his points-streak to seven games and has eight points. Suter also raised his points total to eight.

Vanek says that when a teammate slumps, it’s up to other guys to chip in.

“That’s what makes a good team,” he said. “Things are going good for me right now; I know I hit that rough patch. We need guys like Pomer to step up, which he will.

“Again, no one has perfect seasons. There’s going to be a stretch when it doesn’t go your way, and we need other guys to pick each other up. That’s what makes a good team, and right now we’re doing that.”

Even goalie Devan Dubnyk has produced lackluster statistics so far. He stopped 22 of 25 shots against the Oilers Tuesday night and has a goals-against average is 2.27 and a save percentage of .909.

More important, however, is that he has a 6-2 record.

And through Tuesday’s play, Minnesota was tied for second in the Western Conference with 13 points, just one behind Dallas.