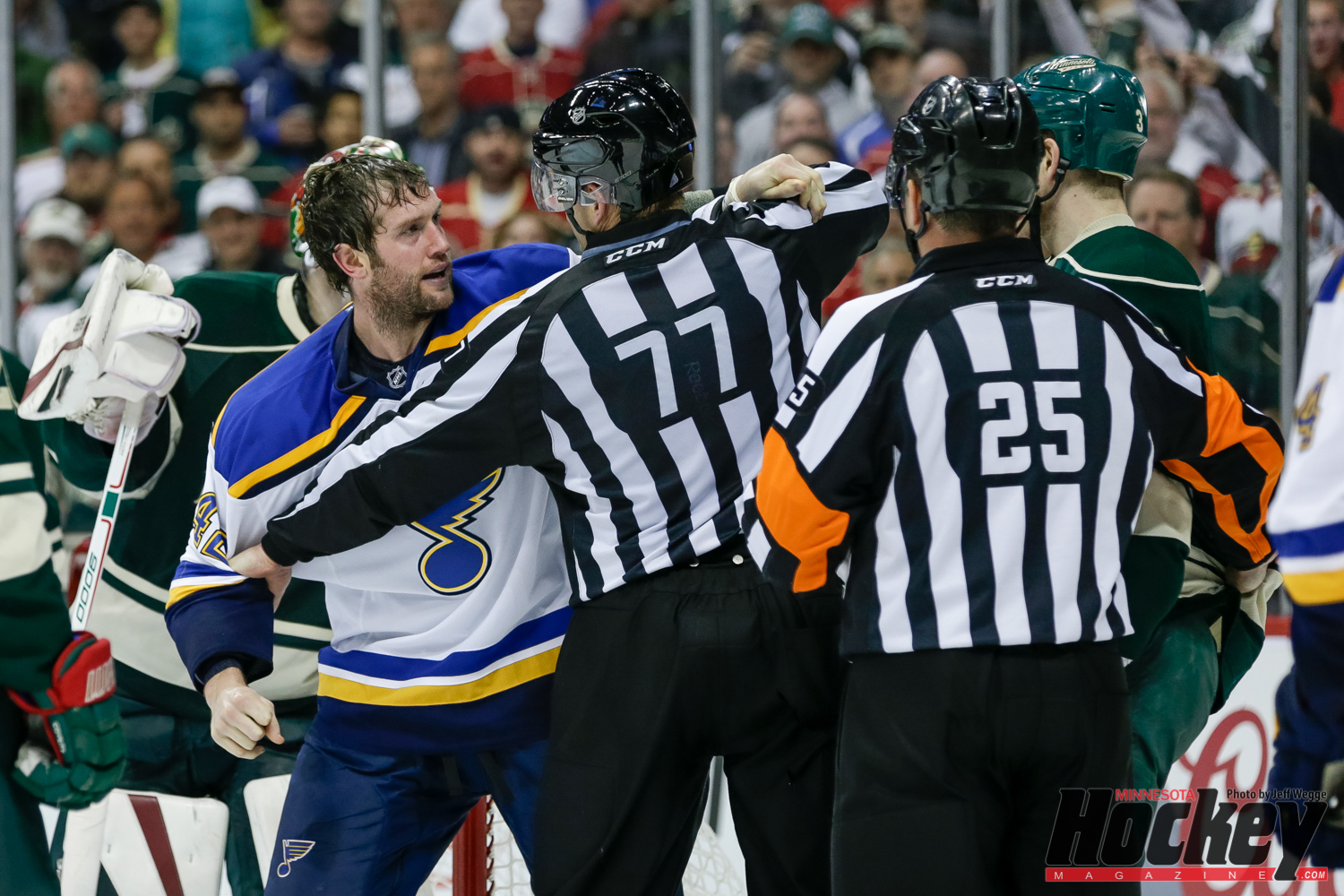 David Backes and the Blues made every effort to bait the Wild into engaging in their antics but Minnesota wouldn’t bite in a 3-0 Wild win on Monday night at Xcel Energy Center. (MHM Photo / Jeff Wegge)

St. Paul – The Wild played textbook defense to disassemble the St. Louis Blues’ attack, ignored the Blues’ repeated attempts to square off and rolled to a 3-0 victory Monday night to take a 2-1 lead in the best-of-7 NHL playoff series.

With a highly amped crowd of 19,165 prepared to lift the ceiling of the Xcel Energy Center, fourth-seeded Minnesota played like the favorite for 60 minutes against the top-seeded Blues.

And, as people like to say, the crowd went wild.

“We fed off the energy the crowd gave us,” said forward Jason Pominville, whose second-period goal was the winner. “We knew it was going to be good and it was even better than what I expected.”

Devan Dubnyk needed just 17 saves to record the shutout while Pominville, Zach Parise and Nino Niederreiter each scored for the Wild, who will try to secure a 3-1 series lead in Game 4 Wednesday night at the X.

“Obviously, we feel good about our game,” Pominville said, “but we’ve got to put it behind us and look at the next one because they’re going to regroup and bounce back just like they did at home.”

The Wild’s speed game left St. Louis behind much of the evening and reduced players like Steve Ott and David Backes to trying to goad Minnesota players into extracurricular post-whistle stuff.

“Our guys are able to handle it,” Wild coach Mike Yeo said.

The line of Mikael Granlund, Pominville and Parise each accounted for two second-period points as the Wild took control before getting a late empty-netter from Niederreiter.

“We were a lot better with the puck tonight in the offensive zone,” Parise said. “We were holding onto it longer, making some more plays and we were better on the rush, I thought, attacking the middle of the ice. We were able to get into the zone with some pressure. Teams look fast when you do that.”

Neither team got a lot going during a scoreless first period, but the Wild limited the Blues to just four shots on goal as a sign that it was not about to yield a whole lot.

Minnesota grabbed a 1-0 lead when Parise found Pominville alone in front of a wide-open net at 14:08 of the second period, and two minutes later Parise dug the puck free and beat Blues goaltender Jake Allen to make it 2-0.

The vocal response of the 19,000-plus surprised Dubnyk, who was playing his first home playoff game and said he couldn’t even hear officials’ whistles or the simple sounds of the game.

“You’re moving around deaf and, you know, I think we fed off it,” he said. “We got going in the second period and really used the crowd to our advantage.”

Granlund’s line was one of four that repeatedly outskated the Blues.

“Every single line, every pairing tonight was on top of the puck,” Dubnyk said.

Jason Zucker, Justin Fontaine and several others put on speed skating demonstrations all evening for the appreciative standing-room-only audience.

“We’re build on speed,” Yeo pointed out. “We have to be playing fast.”

Additionally, they utilized their speed to backcheck the heck out of the Blues forwards who had led St. Louis to a 4-1 win in Game 2 in St. Louis.

“I thought from goalie on out, we didn’t have a passenger,” Parise said. “Everyone contributed in their own way. We were tough to play against.”

Charlie Coyle, who had three hits as Minnesota led 28-26 in hits, said his team produced exactly what was called for.

“That’s the type of game we want right there,” he said. “A tough game on them, make things tough, clog up the neutral zone and don’t give ’em much.”

Dubnyk had an often relaxed 60 minutes, thanks to Minnesota leading 24-17 in shots and quickly clearing out the defensive zone whenever the Blues got close.

“The defense played awesome,” Coyle said. “We were trying to help out, blocking shots, being in the shooting lane, boxing out guys, and that’s the way we want to play.”

After outplaying the Blues soundly in two of three games and battling them evenly in the other, the Wild appear to be sitting in a very comfortable spot. Nevertheless, they say they are taking nothing for granted.

“It’s all about the next game now,” Granlund said. “It was a good effort for us, but we need to keep on and move to the next game.”

Backes, the Blues’ captain who is from Blaine, pointed out that his team certainly expects to be ready for Game 4.

“We have to learn our lesson, put this behind us and remember it’s a battle out there,” he said. “It’s a war and it’s going to take a great effort every night against this team.”