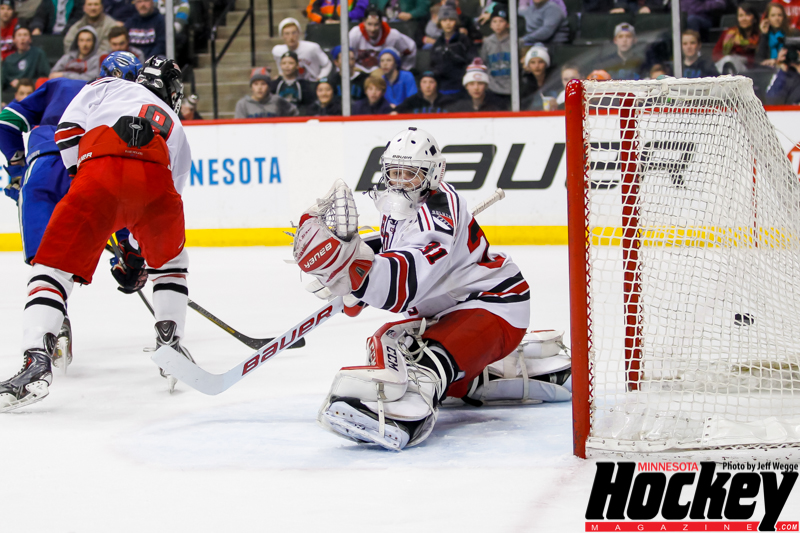 SAINT PAUL—A fraction more than a second was all that separated fourth-seeded Duluth East from a scoreless tie with No. 5 Eagan entering the final period of their Thursday night Class AA quarterfinal clash. But Eagan’s Nick Wolff picked off an errant Greyhounds’ clearing attempt and fired a shot off teammate Max Elsenheimer’s right knee for 1-0 Wildcats lead with 1.1 seconds showing on the clock.

The goal stood up as the game winner in Eagan’s 3-0 win over Duluth East setting up a rematch of Eagan’s early-season 2-1 win over Edina in the state semifinals. Elsenheimer scored a second goal early in the third period to give the Wildcats some breathing room and goaltender Andrew Lindgren shut out the Greyhounds on 28 saves.

“We could have taken [the puck] into the corner and let the clock run out but we kind of panicked and threw it around the wall, a soft throw on the wall, and the wrong guy had the puck,” Randolph said. “He buried it.”

To that point, the game was a tightly contested, evenly played matchup fitting of the team’s seedings. In fact, the game-winning shot left the combatants tied with 17 shots each after two periods.

While the Greyhounds were making their sixth consecutive state tournament appearance, the Wildcats came into the weekend with only two players with tournament experience. But Eagan played like veterans, particularly over the final two periods, and pulled away for the win.

“I would never say this, but I was going to be real happy if it was close after the first,” Eagan coach Mike Taylor said. “Because then I knew our kids would get they’d be over the shock and awe when you go out in that crowd. I think you saw more how we have been playing in the second and third, that’s how this team’s been performing.”

Randolph thought the Greyhounds luck was about to change in the middle of the second when, with Wolff still off for roughing at 9:48, Eagan’s Kyle Stebbing tripped East’s Ash Altmann setting up a two-man-advantage for 48 seconds. But that was negated when Altmann was tagged with an embellishment penalty on the play.

“The only call that bothered me all night and still bothers me is that embellishment,” said Randolph who used the term a total of 12 times both during and immediately after his press conference. “Are you kidding me? He’s a 10th grader; he doesn’t even know what embellishment is … he’s the last guy that would embellish.

“I would have liked our chances at two men up at that point.”

But the Wildcats put the clamps on Duluth East the rest of the way as, although the Greyhounds got their shots, few attempts were of the threatening variety.

“At the end of the day, we are who we are,” Randolph said. “We’ve got four seniors and have one of the seniors playing on one leg (Jack Kolar), so we’ve been really proud of this group and they pushed Eagan. I tell you what; they knew they were in a hockey game.”