After playing with fire, Minnesota gets burned by desperate Predators 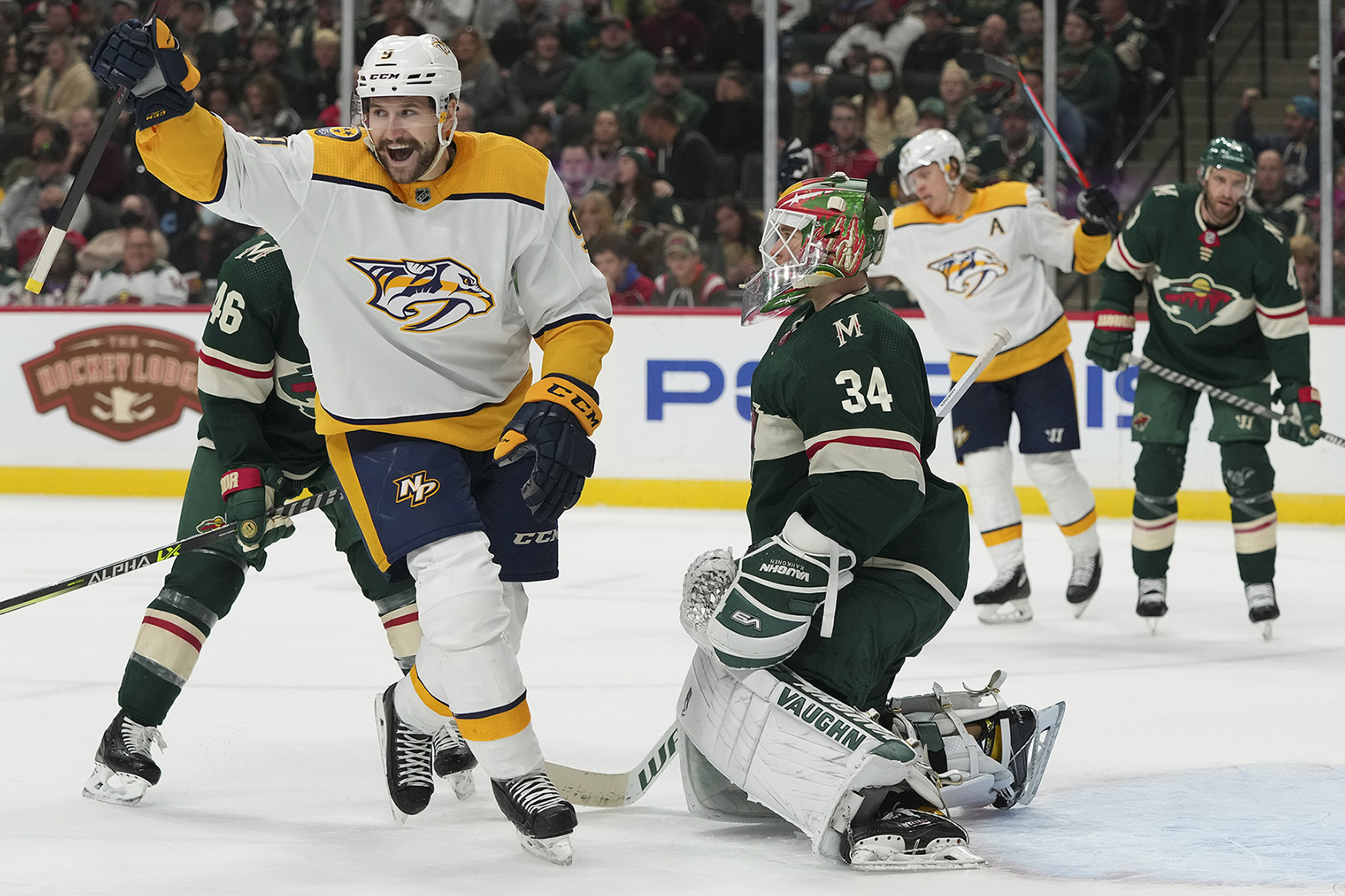 Nashville's Filip Forsberg celebrates his second period goal giving the Predators a 4-1 lead on their way to a 5-2 win over the Wild on Oct. 24, 2021 at Xcel Energy Center. (MHM Photo / Rick Olson)

ST. PAUL — A pair of goals by Ryan Johansen and and a four-point night (1-3–4) by defenseman Roman Josi led the Nashville Predators to a 5-2 win over the Minnesota Wild on Sunday night at Xcel Energy Center, snapping the Wild’s season-opening winning streak at four. Making his NHL debut, Nashville goaltender Connor Ingram stifled Minnesota with 32 saves, including 15 in the third period.

Minnesota’s Kaapo Kahkonen gave up five goals on 29 Nashville shots in his first action of the season while the Wild’s fourth line of Nico Sturm, Nick Bjugstad and Brandon Duhaime provided all of the offense which wasn’t nearly enough. 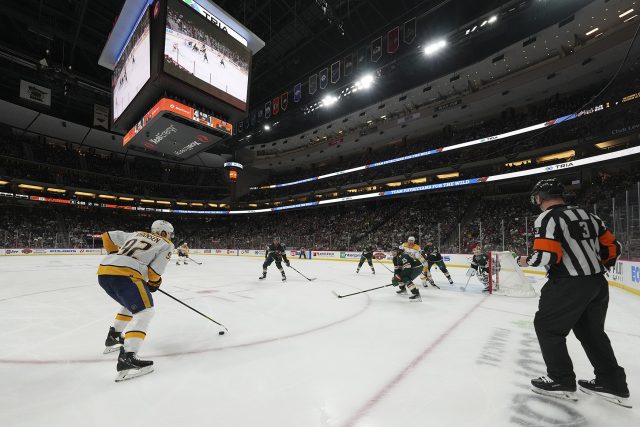 Already with two goals to his credit, Nashville’s Ryan Johansen surveys the landscape for more in the second period of the Predators’ 5-2 win over the Wild on Oct. 24, 2021 at Xcel Energy Center. (MHM Photo / Rick Olson)

Although undefeated through four games, Minnesota hosted the 1-4-0 Predators with perhaps the most precarious, albeit entertaining, 4-0-0 record imaginable. Including tonight’s game, the Wild have surrendered the first goal in each of its five games thus far.

Wild forward Frederick Gaudreau said it becomes a different game when trailing from the start.

“Not the game itself, it’s more mentally,” Gaudreau said. “It’s just harder to always trail behind and feel like you always have to come back. When you get the lead it just gives you more confidence.”

With a pair of overtime wins and Marcus Foligno’s game winner with eight seconds left in regulation to beat the Kings, Minnesota has led only 30:19 of the season’s 308:13 total playing time, meaning the Wild has only played with a lead for 9.8 percent of the season.

“You can’t do it every night and we’ve been putting ourselves in that position but, fortunately, we’ve been able to come back and score those big goals when needed,” Wild captain Jared Spurgeon said. “Tonight we didn’t have that, I guess, luck we can call it.”

Reliance on luck was bound to catch up with Minnesota sooner than later. Tack on some inconsistent goaltending and the Wild were ripe to be knocked down a notch by a hungry Nashville team trying to slow the bleeding of its rough start.

That fact wasn’t lost on the team as Sturm noted it was a topic of discussion in the dressing room prior to the game.

“At some point you know you’re gonna face a team, like today, they were so desperate,” Sturm said. “I think that it’s, it’s definitely a lesson to learn. I mean at some point we’ve just gotta score first, it’s that simple.”

Minnesota has allowed 14 goals against over its last three games and, outside of Cam Talbot’s massive save on Winnipeg’s Logan Stanley in overtime in the home opener, the Wild have not been able to count on Talbot and Kahkonen to bail them out when their sloppy play required it.

A disastrous first period saw the Wild commit four penalties — two of them in the offensive zone — leading to two of Nashville’s three goals, consistently turn the puck over, fail to score on a rookie goaltender and get a shaky start from its own goaltender. Minnesota trailed 2-0 before the game was six minutes old on back-to-back power-play goals by Roman Josi and Ryan Johansen, his first of two in the period, and the Predators led 3-0 after one. 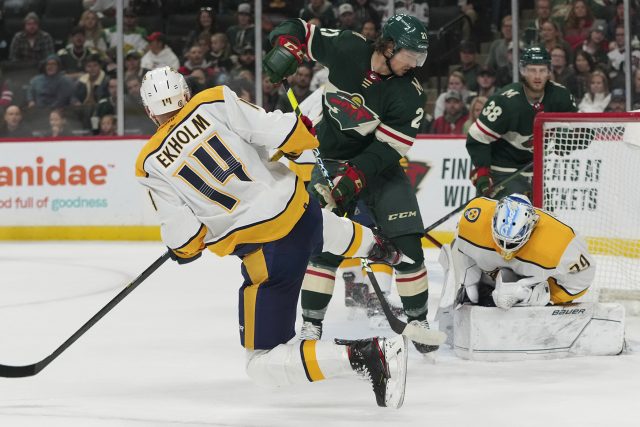 Minnesota’s Brandon Duhaime tosses Nashville’s Mattias Ekholm aside as he looks for a rebound Predators’ goaltender Connor Ingram would not surrender in the Wild’s 5-2 loss on Oct. 24, 2021 at Xcel Energy Center. (MHM Photo / Rick Olson)

Energy was the hot topic after the game, specifically the Wild’s lack thereof.

“We didn’t start right,” Wild coach Dean Evason said. “We knew they were going to be desperate, which they were, and we didn’t come close to matching it.

“To a man, likely besides Sturmy’s line, we were were all bad.”

A great bank pass by Wild defenseman Jon Merrill found Bjugstad in stride behind the Nashville defense and the former Gopher netted his first of the season at 11:30 of the second period to cut the lead to two. But Josi picked up his fourth point of the game when his shot deflected off Filip Forsberg’s leg just 1:45 later and Tanner Jeannot gave Nashville what appeared to be a 5-1 lead entering the final period.

Sturm, Bjugstad’s lookalike, had other ideas and the pride of Clarkson University cut the lead back to three at the 19:57 mark. Duhaime, who scored his first NHL goal the night before against Anaheim, picked up his first career assist when his shot trickled through Ingram to a waiting Sturm at the weak-side post.

“The harder you try, the more complicated it gets sometimes in most games, and I think that’s what helped us, at least tonight,” Sturm said of his line’s three-point night. “It was mentioned just try to keep it simple and get the pucks in and go and forecheck and try to recover those pucks. As long as we keep doing that we’ll have success.”

Minnesota’s top line of Joel Eriksson Ek, Mats Zuccarello and Kirill Kaprizov has provided a few spectacular moments to start the season and have a combined 14 points (5-9–14) but the $45 million man on the left side is still seeking his first goal of the season. Whether the contract and its enormous expectations are weighing on him or not is up for debate, but the fact that he appears to be pressing and trying to do too much, resulting in turnovers and poor decisions, is not.

“Not only one guy is concentrating on you, but all five guys on the ice are watching for him,” Evason said. “So if you try to beat people one-on-one, it usually turns over or you try to make a softer play, it turns over. As we know, he’s a gritty guy and he’ll figure it out.”

Evason said the key for Kaprizov to get back on track is to simplify his game going forward.

“We know that he can get in on a forecheck, he can finish his check, and that’s what he’s got to do first. Then, you know, worry about the pretty passes and pretty plays after.” 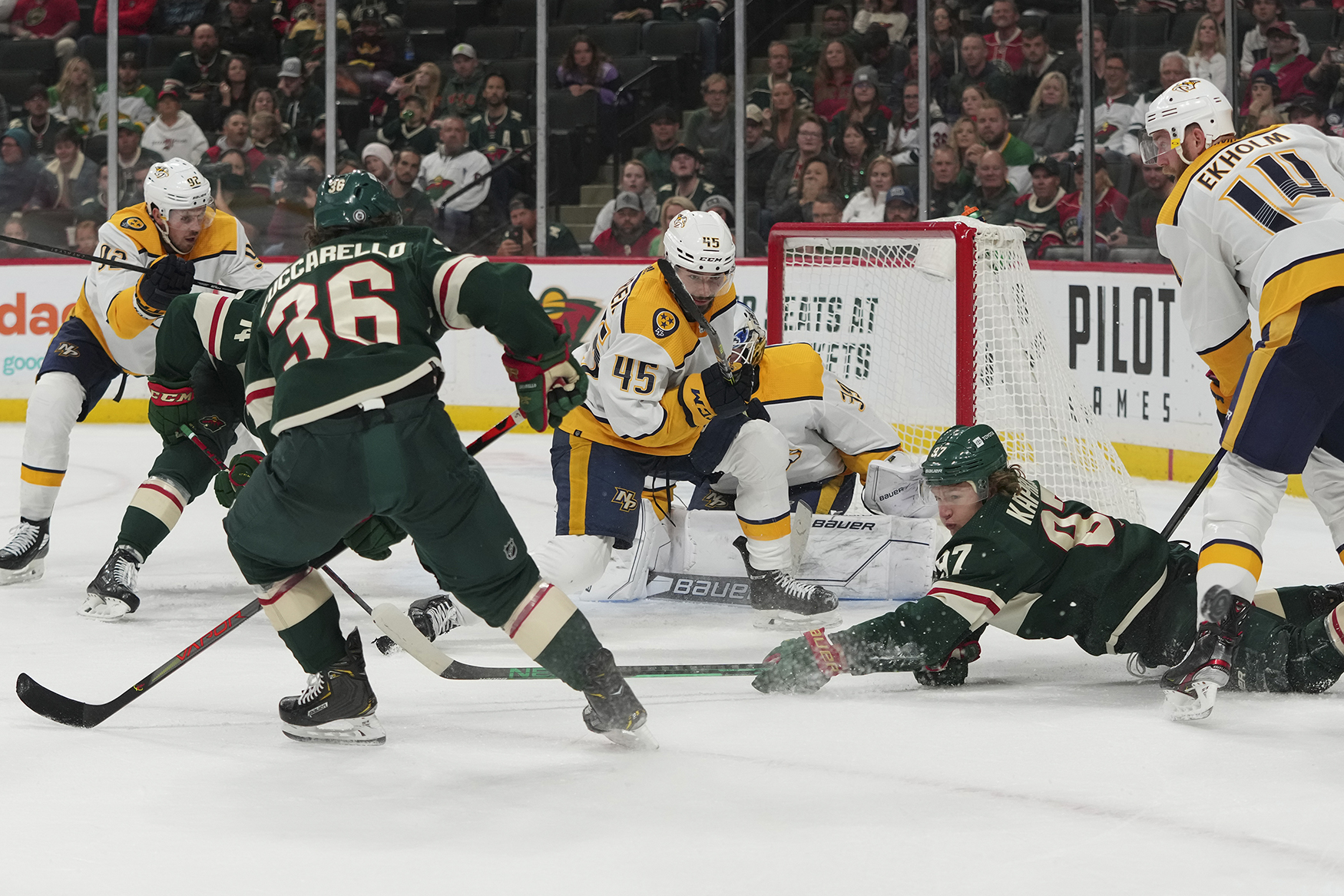 Minnesota’s Kirill Kaprizov dives for the puck as part of a net-front scramble in the Wild’s 5-2 loss to the Nashville Predators on Oct. 24, 2021 at Xcel Energy Center. (MHM Photo / Rick Olson)