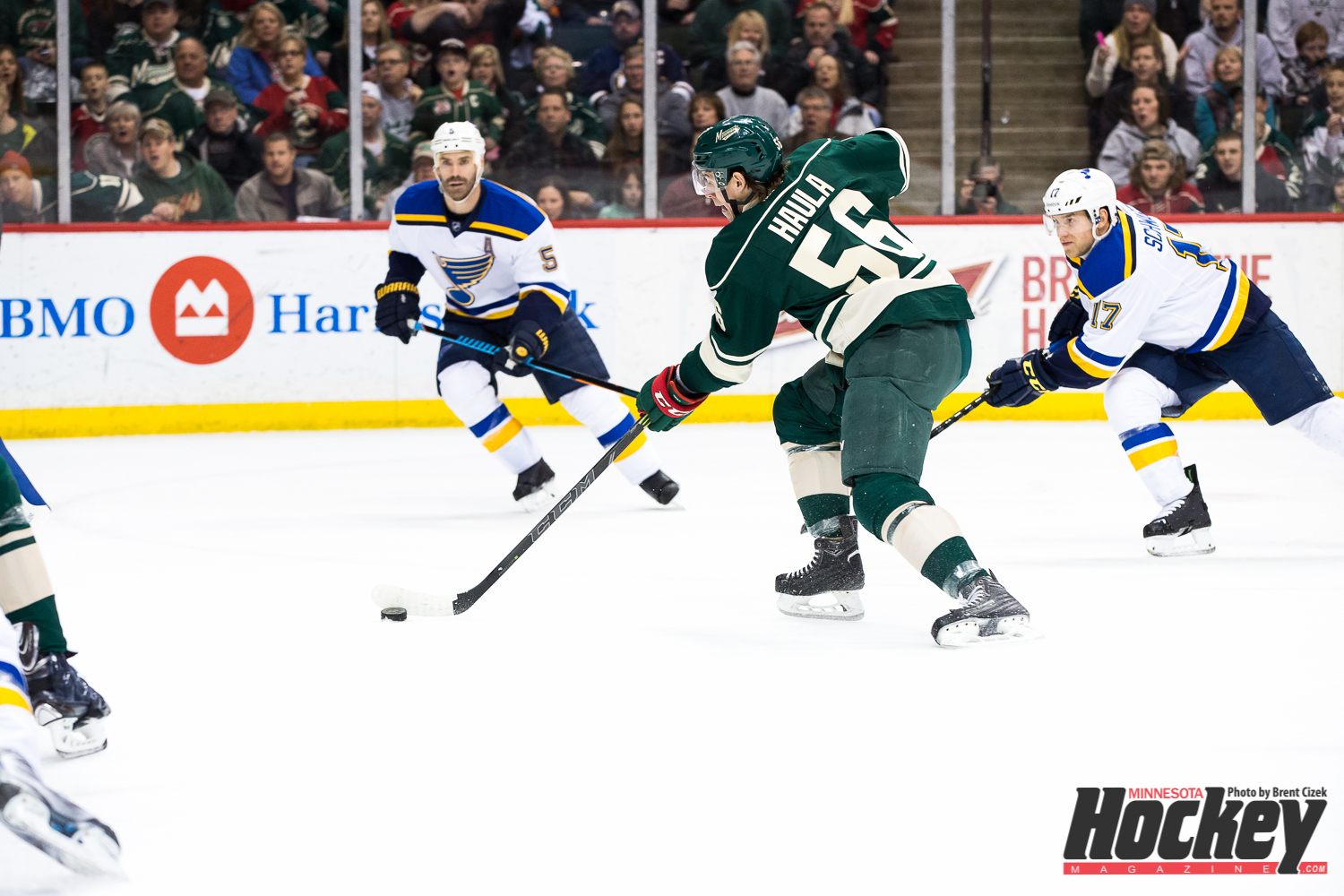 After playing a starring role in the Wild’s first-round win over Colorado a year ago, Minnesota’s depth has Erik Haula, among others, battling just to be in the lineup as the 2015 Stanley Cup Playoffs begin. (MHM Photo / Brent Cizek)

St. Paul – With the Stanley Cup Playoffs about to open and Minnesota considered one of the better of the 16 candidates, there are a lot of happy faces these days in the Wild dressing room.

However, donning a smile when you are out of the lineup for your team’s opening Stanley Cup Playoff game does not come easily.

And the Wild, who kick off a seven-game series against the ultra-tough St. Louis Blues Thursday evening in St. Louis, have an abundance of extra bodies who will not be suiting up.

It’s a good thing and it’s a bad thing.

Carter was among the top 12 forwards in Tuesday’s Wild practice at the Xcel Energy Center because Matt Cooke sat out with what Yeo called “discomfort,” but Yeo declined to speculate about who’s in and who’s out between Cooke and Carter.

As of Tuesday, Prosser, Haula and Bergenheim looked to be on the outside.

No one has had a crazier ride to this point than Prosser, who was among the Wild’s top six defensemen a year ago, then signed as a free agent with the Blues before he was claimed off waivers by Minnesota at the beginning of the season.

“I’m happy to be back,” Prosser said. A native of Elk River, Minn., he pasted on his trademark smile after practice Tuesday before admitting that it stings to be on the outside.

“It’s out of my control,” he said, noting that all he can do is work hard in practice, offer as much psychological and physical support to teammates as possible and be ready if called to play.

Minnesota’s depth – thanks to players who have recently returned to full health like Jason Zucker, Carter and probably Cooke – is at an all-time high.

“It’s probably as deep as it’s ever been,” Prosser noted, crediting additions obtained by general manager Chuck Fletcher including Jordan Leopold, Chris Stewart and Bergenheim. “We’ve got a lot of guys who are ready and good players. It’s a testament to our team.”

Selecting his lineup and keeping the ones who aren’t in it happy is part of Yeo’s job.

“That’s part of the challenge,” Yeo said, “but guys that were here last year remember and guys that have been part of the playoffs know things change quickly.”

Haula, Yeo pointed out, played limited minutes a year ago before taking on more responsibility “and obviously having quite an impact as things went on.”

“It’s an exciting time,” he said. “Of course it’s disappointing not being in, but I’ve just got to do the work and be ready when called upon.”

Carter has ridden the roller coaster of emotions, slipping out of the team’s top 12 forwards before climbing back in with Cooke missing Tuesday.

Although Carter beamed after practice, he knew his status could change quickly.

“I think we’re all prepared to play at any time,” he said. “That’s kind of where my head’s at right now.”

The differences between a year ago and today on the Wild’s roster are large: Cody McCormick, Stephane Veilleux, Clayton Stoner, Jon Blum and Ilya Bryzgalov have been replaced by Zucker, Stewart, Leopold, Devan Dubnyk, Thomas Vanek, Matt Dumba and Justin Fontaine. Also available besides Prosser and Haula are Bergenheim, Christian Folin and Jordan Schroeder.

The Wild’s lineup is not only deep, Reid pointed out, it’s healthy.

“Minnesota’s got more bullets in the chamber than they had previous years,” he added.

Yeo says he’s not about to declare this a Stanley Cup contender, even if the possibility of Minnesota advancing deep into the playoffs does exist.

“Definitely, this is the best team in my tenure,” Yeo said. “The most complete team. Again, we’re not going in the locker room saying, ‘OK, this is our year, this is do or die,’ or anything like that. We’ve got a quiet confidence about us.”

That said, he noted, the Blues present too tough of an opponent to think too big.

“Our expectations,” Yeo said, “are nothing more than to be ready for Game One right now.”