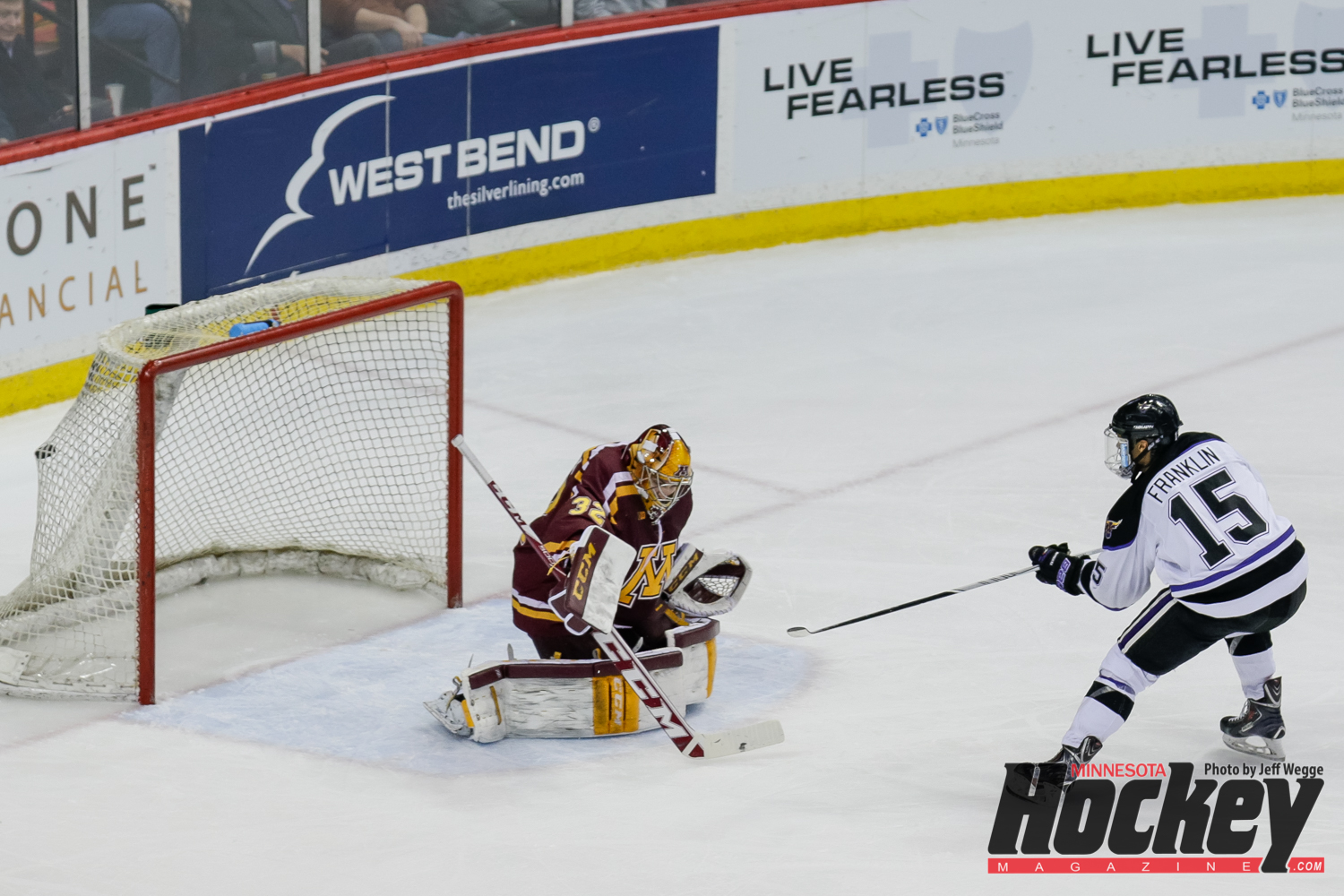 ST. PAUL — Stephon Williams has always found ways to wind up in the center of unusual hockey situations.

The Minnesota State goaltender has sat in the penalty box and he once made a glove save with his bare hand. Now, add another strange occurrence to Williams’ list.

Williams could’ve been the hero or the goat after he made a bizarre decision late in No. 1 MSU’s 4-2 win against No. 17 Minnesota in the North Star College Cup semifinal Friday night at the Xcel Energy Center.

Protecting a two-goal lead with 1:13 remaining in the third period against Minnesota, MSU defenseman Casey Nelson blocked a hard shot with his body and struggled to get off the ice.

With Nelson crawling in the left circle in severe pain, the Mavericks bench hollered for the referee to blow the play dead as the Gophers worked the puck around the zone on a power play.

“It’s one of those things you’re on the bench and you’re saying ‘hey, you gotta blow the whistle’ because there’s a guy down,” MSU coach Mike Hastings said. “But if I’m on the other bench, I’m saying ‘he’s not going to die.’ He’s injured but they’re on the power play so I can understand they can’t blow that down.”

Williams took action in the most unexpected way — he dropped his stick, turned around and flipped the goal off its moorings to draw a whistle. The move sparked Minnesota players to slam their sticks and the Gophers bench to stand up in protest.

“I saw Casey down and it was already a 6-on-4 penalty kill and with him down it’s a 6-on-3,” Williams said. “I was willing to take a delay of game to get Casey off the ice and get fresh guys on the ice.

“It was one of those things where we had a guy hurt and things were chaotic at the time. Our guys were exhausted. It was an impulse reaction and I’m not going to make a habit out of it.”

Williams knew a penalty was coming his way, but the Mavericks were glad he acted the way he did. As did the Mavericks fans who cheered once his two-minute delay-of-game minor penalty was announced in the arena.

While Mavericks players helped Nelson to the bench, the officials allowed Minnesota the choice to take a two-minute minor or a penalty shot. Gophers coach Don Lucia chose the latter, sending senior Seth Ambroz out to take it.

“We had a power play/penalty shot option but with 1:13 left we kind of had to go with the penalty-shot option at that point in time.” Lucia said, adding that he had never seen a play like the one Williams made on the net.

“I guess I wasn’t really aware of the penalty shot rule,” Williams said. “It was just heat of the moment.”

Ambroz went to his backhand and tried to lift the puck over Williams’ right pad, but Williams turned it away and celebrated with a fist pump.

“It was nerve-racking but it was a great feeling,” Williams said. “I knew if I didn’t stop it, there would’ve been a little chewing-out going on.”

“Casey was laying there, I’m like ‘blow the whistle!’ but I guess that’s Willy,” Mankatoa forward Matt Leitner added. “He’s confident in his breakaway skills so he knocked the net off.”

As mentioned before, this isn’t the first unusual situation in which Williams has found himself. He served a 5-minute major penalty on Jan. 11, 2013 when he pulled the facemask of Wisconsin’s John Ramage, because, as Williams said after that game, Ramage was on top of him and he needed to stop the pain.

As a member of the Waterloo Black Hawks in 2012, Williams’ glove fell off and was forced to stop a puck with his bare hand (video footage of that play has seen 100,400 hits on YouTube).

So, Williams again found his way into the spotlight Friday night.

“It was more to get Casey off the ice and I thought it would benefit us in the long run,” Williams said.

Williams’ move nudged a stellar offensive performance by Bryce Gervais — two goals and assists on the night — to the backburner, in terms of postgame banter. But Gervais’ goals late in the first period and early in the first gave MSU a 2-1 lead after Minnesota opened the scoring with an Ambroz goal.

“On the bench, it was all positive because we were getting chances, so we knew one would go in,” said Gervais, who has 15 goals this season. “We knew we had to win the first one to win the tournament and that was embedded into our guys’ heads.”