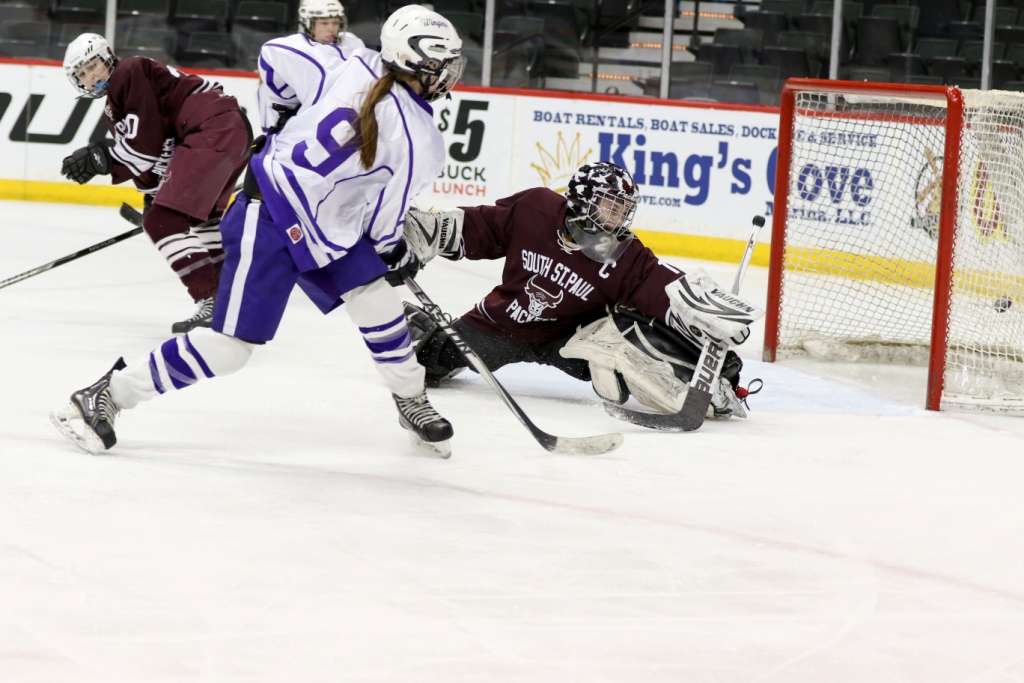 SAINT PAUL – All Taylor Heise wanted was another chance. Her Red Wing teammates are thankful she got it.

The freshman forward who missed an open net early in the third period, bounced back to score the game winner with 52.4 seconds remaining in the Wingers’ 3-2 Class 1A girls’ third-place win over South St. Paul on Saturday morning at Xcel Energy Center.

After watching her redirect of a 2-on-1 pass from teammate Reagan Haley sail over the crossbar the Wingers up 2-0 to start the final period, Heise wasn’t about to let the opportunity get away when the identical situation presented itself in the final minute.

“When I missed that [first one] I was really mad,” Heise admitted. “But when we came back I said I wasn’t going to miss the second one.”

Heise scored twice, with Haley assisting on each, after Kayla Oberding opened the scoring at 9:50 into the game. The win gives Red Wing and coach Scott Haley a third straight, and fourth overall, Class 1A third-place trophy.

“We are the master of the third-place game,” coach Haley said. “That’s a three-peat.”

Before Heise’s misfire, Red Wing nearly extended its lead to 3-0 with half a minute to play in the second but was thwarted by the brilliant effort of South St. Paul goalie Sydney Conley.

With Red Wing’s Maddy Hardyman racing into the Packers’ zone all alone, Conley opted to charge at the Winger’s junior forward, knocking the puck away with a diving poke check above the hash marks. Conley then quickly recovered to deny Haley, a Minnesota-Duluth recruit, with a terrific toe save.

In the ensuing mayhem Conley pulled down a Red Wing player to earn herself a tripping penalty to complete an eventful 20-second sequence. Conley said her decision to challenge Hardyman the way she did was a matter of her instincts taking over.

“It was kind of just an adrenaline rush,” Conley said. “I was just, ‘I might as well do something and not let her have a chance,’ and it worked my way.”

“It was as great a goaltending display that I’ve ever seen, I think,” South St. Paul coach Dave Palmquist said. “I mean, it was point-blank robbing them, stealing goals from them.

“We kind of motivated the team by saying, ‘Look at what your senior goaltender is willing to do for you guys, you guys gotta pick it up,” and in the third period we played really well and were right there, it just didn’t go our way today.”

The Packers indeed came back in the third to tie the game on goals by AJ Deering and Taylor Cashman 3:03 apart past the period’s halfway mark making Heise’s heroics necessary.

“To get the two goals to tie it up, that was a great effort, gutty effort,” Palmquist said. “Except for the end result, I’m really happy with the way we played today and, obviously our goaltender was again outstanding.”