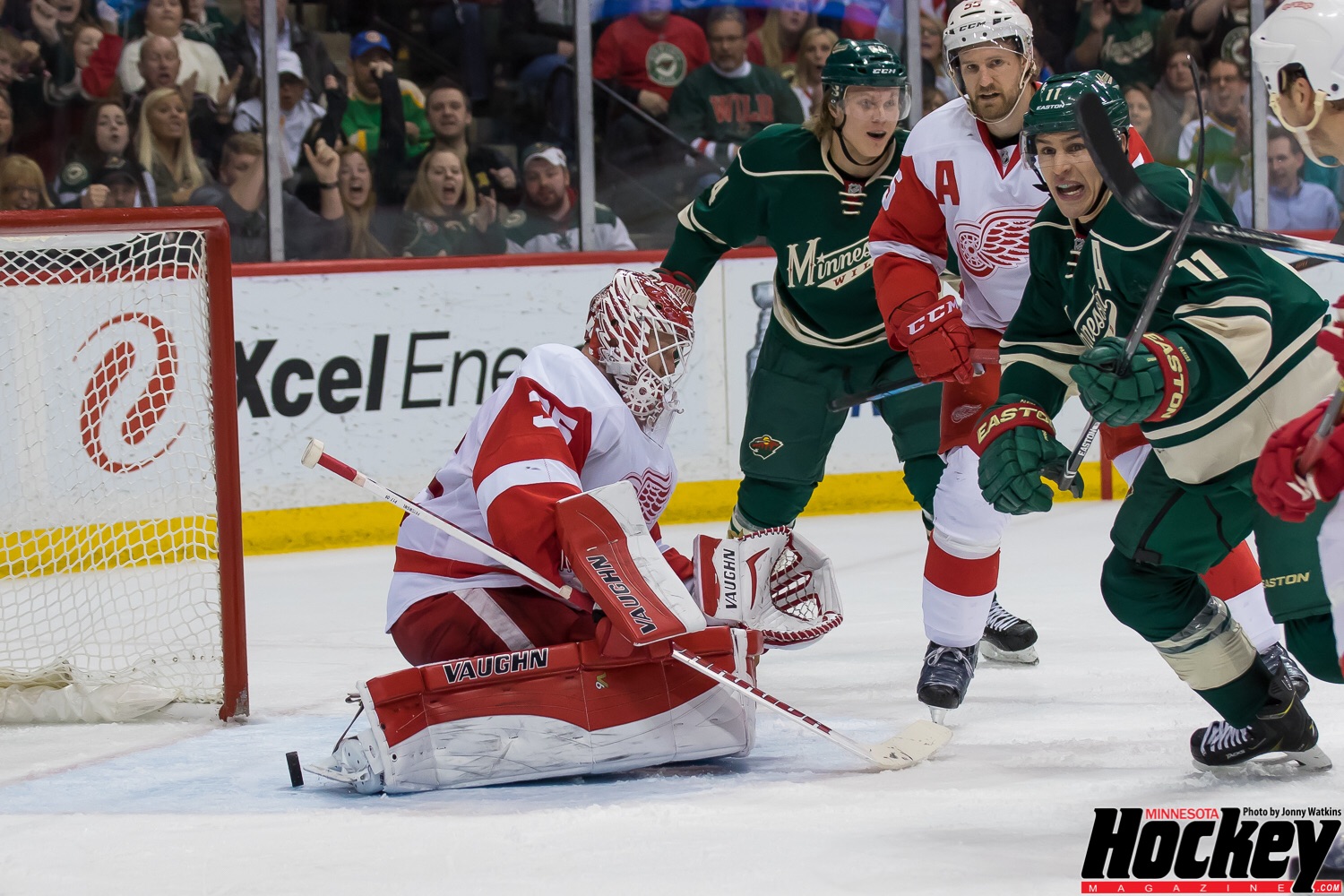 St. Paul – Officially, no one on the Wild is particularly worried.

Unofficially, a small-but-noticeable level of defensiveness emerged among some of the team’s key personnel following Minnesota’s 3-2 shootout loss to the Detroit Red Wings in front of 19,245 Saturday night at the Xcel Energy Center.

Zach Parise scored both Minnesota goals and was one player whose drive and push never wavered, even though some of his teammates seemed to have difficulty getting going.

“We just didn’t play well,” Parise said of the early going. “They were better than us, I thought, for the first two periods.”

“I feel like we should have won the game,” he said, “so it’s disappointing to get a point and not get a second one.”

“Well, we play good teams,” he said. “We’re playing other teams that are desperately trying to get in the playoffs, so we’re not going to walk all over every team. … They’ve got good players, too. They want to win, also. You’ve gotta give the other teams a little credit, sometimes.”

Detroit got goals from Riley Sheahan and Gustav Nyquist plus a deciding tally fron Darren Helm in the eighth round of the shootout to move into a tie with Boston for third place in the Atlantic Division.

It did not help the Wild’s cause that captain Mikko Koivu sat out with a scratched retina. Coach Mike Yeo said Koivu’s eye should be recovered enough for him to participate when the Wild play host to the Winnipeg Jets Monday night.

The one point gave the Wild 96 this season and kept them atop the Western Conference wild-card race with four games remaining.

“Any point you get right now is big,” Yeo said.

Still, Yeo’s team has lost two in a row for the first time since goaltender Devan Dubnyk arrived via trade on Jan. 14.

“I’m not worried,” Yeo stated. “It’s not like we were that bad; let’s not paint that picture. We played a pretty good hockey team tonight and we knew they were going to play their best game.”

Yeo talked about “tension” in the media room during his postgame appearance, and disagreed when hints from both Parise and Ryan Suter that the Wild power play needs extra work in practice were relayed to him.

For their part, neither Paris nor Suter were particularly willing to delve deeply into the power play, on which the Wild went 1 for 6 and hardly had a chance when they drew the final man-advantage with just 2:31 remaining in the third period.

Asked about that, Parise hesitated, then said, “It’s not going to do any good for me to say anything. It wasn’t good enough. We’ve got to practice it.”

Suter said Detroit gave the Wild problems when they tried to break into the zone on the power play.

Asked specifically if the Wild aren’t working hard enough on their power play, Suter fell silent, then said, “We’ll leave it at that.”

Yeo bristled at the question.

“We come in here and answer 10 questions about the power play,” he said. “We were down a goal and we got a point. We’re not happy getting one point in games here, but we played a good hockey team, they played a great game and we lost in a shootout. Would we be getting the same questions if we scored one more goal in the shootout? I don’t know.”

Yes, the Wild have “spent considerable time” on the power play in practice, Yeo noted.

After mentioning his perception of tension in questions from the media, Yeo said: “I understand that we lost the game tonight in a shootout. It’s disappointing to only get one point. But would we have a different tone right now if we scored (another) goal in that shootout?”

No one could disagree with that, and no one can disagree that his Wild team has rescued a season that appeared headed for disaster two months ago and is on the brink of clinching a spot in the playoffs.

Dubnyk, who stopped 20 of 22 shots and knocked away Helm’s shootout attempt with the back of his leg so convincingly that a review was necessary to confirm the goal, waved off any sense of impending trouble.

“We’re fine,” he said. “We’ve been playing at a really high level for a long time, and you know, that’s going to happen some times. It’s a long season. It’s strange for us because we’ve been playing so well. It’s not how we want to play, and I don’t think anybody in here is worried about that being the way that we’re going to play.

“We know how we can play and what we need to do.”