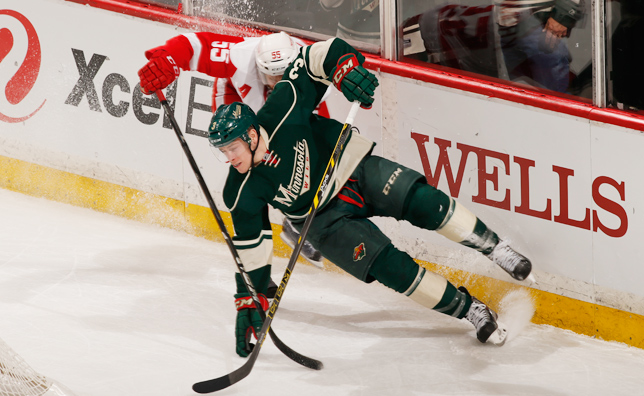 SAINT PAUL—Charlie Coyle made a strong case to be included among the Minnesota Wild’s top-three shootout lineup in the Wild’s matinee game against Detroit on Saturday and the jury of 18,000 ruled in his favor.

Coyle was awarded a penalty shot after he was hauled down by Detroit’s Johan Franzen just 15 seconds into the third period. The second-year forward out of Boston University shrugged off a wobbly puck and beat fellow Hockey East alum Jimmy Howard (Maine) with a great backhand-to-forehand move to tie the game 2-2.

But another former Black Bear, Gustav Nyquist, restored Detroit’s lead with his 21st goal of the year just over five minutes later and the Red Wings made it stand up as the game winner in a 3-2 victory over the Wild.

Nyquist crossed the Minnesota blue line near the right wing boards before cutting across and releasing a shot from the left circle which hit Wild defenseman Jared Spurgeon’s leg before ringing off the right post and in behind Minnesota goaltender Darcy Keumper.

“We’ve been playing good but it’s just a break here and a break that’s kind of breaking us right now,” said Keumper, who finished with 27 saves in his second career start against the Red Wings. “But there’s no time to feel sorry for ourselves, we’ve just got to keep sticking to what works.”

The loss marks just the third time in 15 games Minnesota hasn’t earned at least one point and snaps a 10-game streak to that effect at Xcel Energy Center.

Coyle goal came on his first career penalty shot and the Wild’s first attempt of the season. The last Wild player to score a penalty shot goal was Matt Cullen who performed the feat on Dec. 11, 2001 against the Phoenix Coyotes.

The Wild and Wings traded power-play goals in a fairly physical, tight-checking first period, each team scoring on its lone shot with the man advantage.. Mikko Koivu got Minnesota on the board first, one-timing a Ryan Suter pass from the top of the left circle for his ninth of the year and 14th point in his past 15 games (2-12–14).

Minnesota nearly made it 2-1 near the three-minute mark of the second period when Matt Cooke changed course with the puck behind the Detroit net and walked to the right post. Cooke slid a cross-crease pass to Nino Niederreiter who whiffed on his attempt with nothing but net in front of him.

Legwand, however did bury his opportunity later in the period, the Red Wings’ second power-play goal of the day at 17:48. Riley Sheahan received a pass from Smith near the left post of the Minnesota net and patiently protected the puck before feeding a backhand pass to a net-crashing Legwand for his 12th of the season.

“It’s up to us to win games here, but we’re in the middle of a tough stretch,” Yeo said. “We have to grind through it, we have find a way to win tomorrow.”

“It’s coming down to the wire and we’ve got to make the most of every game right now,” Coyle said. “We can’t take any more games off, any more periods off, any more shifts off, we’ve got to come ready to play every night and play a full 60 [minutes] and take care of business.”

The Wild and Red Wings complete their whirlwind season series in just over 24 hours with a 6:30 pm rematch at Joe Louis Arena on Sunday, a game which will air on NBC Sports Network.