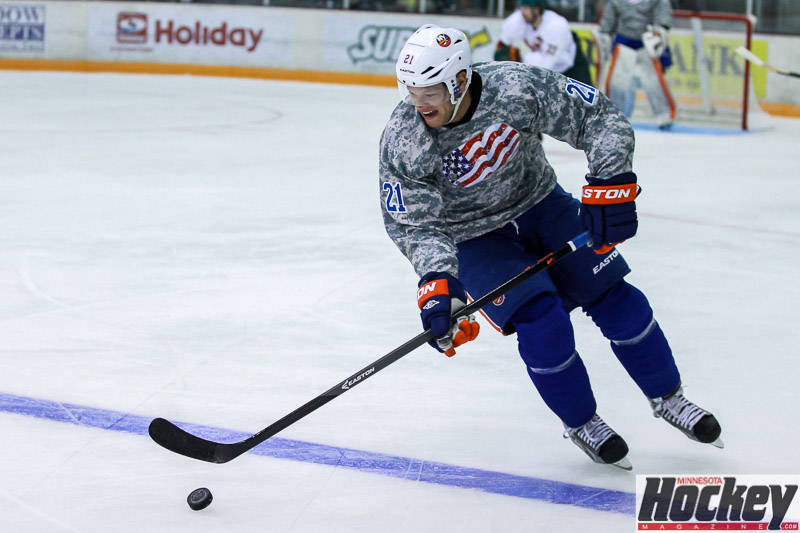 Fans and players alike treated to summer hockey spectacle in support of worthy cause. 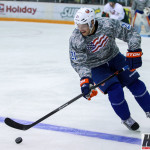 The stars were shining at Ridder Arena on a sunny Saturday afternoon in August as local pro and college hockey players, along with a few imports, laced up their skates in support ofDefending the Blue Line(DTBL). The Aug. 3 Defending the Blue Line NHL Players Charity Game was nearly a sellout thanks, in large part, to the likes of Minnesotans Kyle Okposo (N.Y. Islanders),Nate Prosser (Minnesota Wild), Matt Hendricks(Nashville Predators), Nate Schmidt (Washington Capitals), Alex Goligoski(Dallas Stars) and Nick Bjugstad (Florida Panthers).

Okposo referred to getting together to skate with familiar faces and showing off for the crowd as a nice break from the summer.

“We have fun with it every year and we’re going to continue to support this great cause,” Okposo said.

A non-profit devoted to keeping children of military families focused and active in hockey to help them deal with the stress of deployment, DTBL provides assistance to players toward participation in hockey camps, aiding with registration fees, donating hockey equipment and providing opportunities to attend National Hockey League games. The Hastings, Minn. based organization has sent over 1,000 children to hockey camps across the country along with giving more than $100,000 in grants to help young children achieve their dreams.

“Defending the Blue Line did an unbelievable job today,” Schmidt said. “It was an unbelievable spectacle, the fans were awesome today and it was a great game put on by a great organization.”

In addition to Prosser, Wild players Stephane Veilleux and Josh Harding also took time out to participate. Harding’s debut as a forward, particularly his penalty shot attempt, was easily the highlight of the on-ice action. In fact, the game’s leading goal scorer, NY Islanders forward Eric Boulton with five, played mostly on a line with Harding and Veilleux.

“I’m just happy I didn’t make too much of a fool of myself out there,” Harding said of his effort to play forward for the first time in what he said was 15 years.

Prosser’s initial assessment wasn’t so kind, but he softened a bit.

“He looked like Bambi out there sometimes but, you know, it was good. I was hoping he’d score,” Prosser said of Harding. “He actually looked pretty good. I don’t think I could play that well in goal.”

The exhibition game pitted a team of U.S. players taking on Canada, with a few Minnesotans such as Tom Chorske (Montreal Canadiens), Jimmy O’Brien (Ottawa Senators) and Goligoski helping balance out the rosters. After guiding the U.S. to gold at this year’s World Junior Championships, new Nashville Predators assistant Phil Housley was again at the helm for the U.S. while legendary Minnesota North Star player/coach/executive, Lou Nanne served as Team Canada’s bench boss.

Fans had the option to purchase additional tickets for an opportunity to meet the players and receive autographs prior to the game. The line serpentined from the upper level club room and down a flight of stairs as it stretched to the far end of the Ridder Arena lobby.

“Anytime that you can be a part of this as a professional athlete, you need to,” Harding said. “You need let people know you’re there to support them because there were a lot of people supporting you when you were growing up.”

Team USA prevailed in a 10-8 nail-biter but the day will not be remembered for the game’s outcome; the event’s legacy will be found in the number of children who will benefit from the support shown by both players and spectators.

“It doesn’t matter who wins or loses,” Okposo said. “We’re all winners and the real winner is Defending the Blue Line.”

“To come out to this is such a little thing for us to do but it means a lot,” Harding added. “We just wanted to show our support.”

To make a donation to Defending the Blue Line please visit defendingtheblueline.org.