Minnesota riddles Corey Crawford with shots but can’t solve him 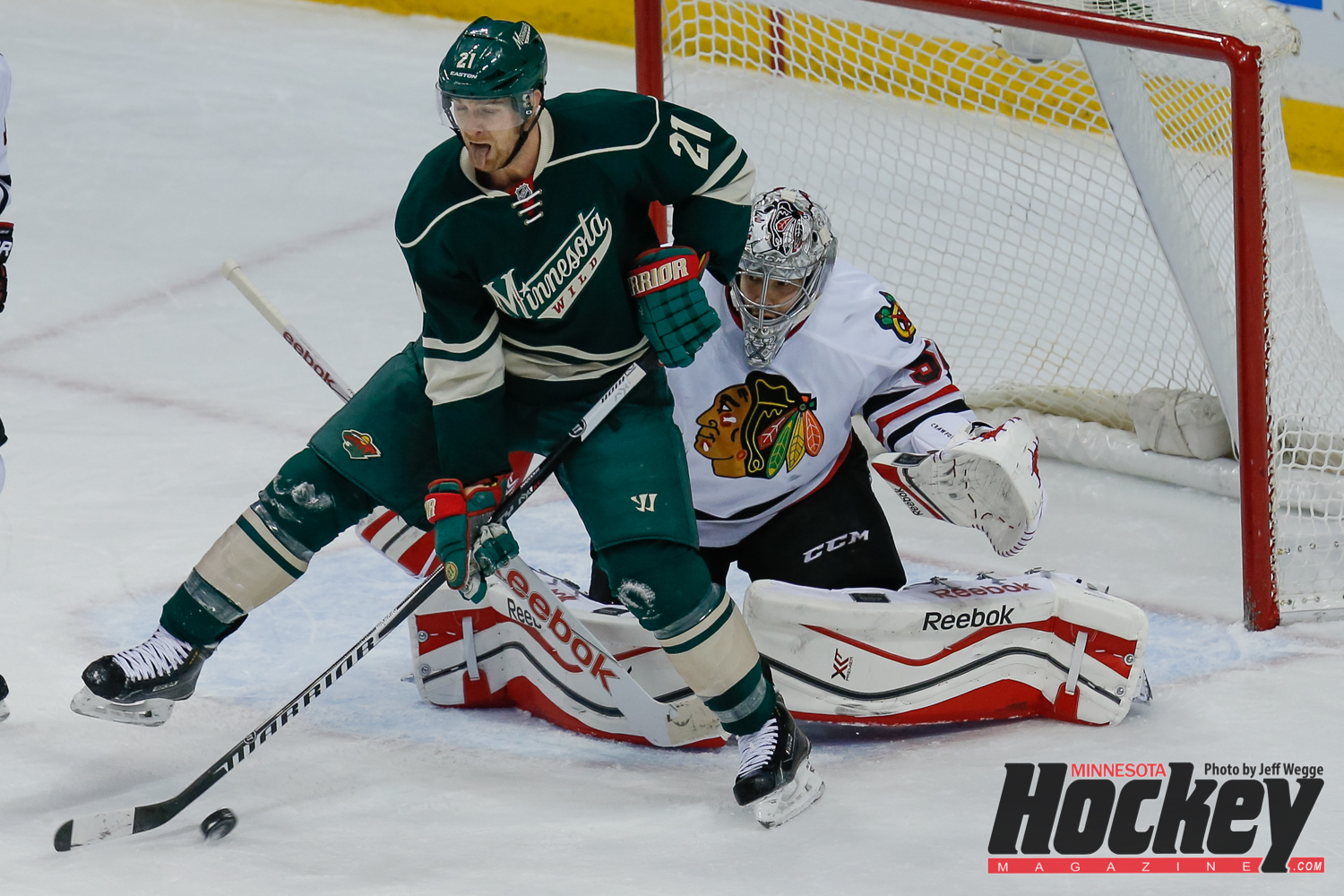 Minnesota riddles Corey Crawford with shots but can’t solve him

ST. PAUL – The Wild capped a dramatic few days in the hockey world by registering their fifth game of the season with 40-plus shots on goal in front of the 20th consecutive home sellout crowd Thursday night.

The end result, however, was a 4-2 loss to the Chicago Blackhawks, Minnesota’s ninth defeat in its past 11 starts.

Nevertheless, coach Mike Yeo said, it was not a disastrous evening.

Yeo, who went off on his team at practice the day before, highlighted the overall details of this game in which his team was missing Zach Parise, Mikael Granlund, Darcy Kuemper, Keith Ballard and Nate Prosser for various reasons.

“It’s hard to be happy when you don’t win,” Yeo said, “but we were down 2-0 and we continued to play. We fell short in the game, but we gave ourselves a great chance.”

Parise, mourning the death a day earlier of his father, former NHL all-star J.P. Parise, missed his second game because of it. Granlund is recovering from wrist surgery.

They are two of Minnesota’s top forwards, but Jordan Schroeder came up from Iowa and Jason Zucker continued a stretch of sterling play, allowing the Wild offense to shake off the absences of the other two.

Minnesota outshot the Black Hawks 44-20 but could not solve the goaltending of Chicago’s Corey Crawford.

“This was a good step in a positive direction,” Wild winger Jason Pominville said.

“The passion tonight, the effort tonight, I thought were the best in a long time,” winger Thomas Vanek added.

Yeo, who went all in with his on-ice tirade in front of Twin Cities and visiting media members Wednesday morning, got exactly what he was looking for.

He said he told his players at the morning skate Thursday that they could play great and win or lose but could not lock up a spot in or out of the playoff race, no matter the result. All they could produce, he noted, would be the proper attitude and the proper work ethic.

The mood in Minnesota’s dressing room was somber but positive. After getting blown out by Dallas over the weekend and losing in lackluster fashion in overtime to San Jose on Tuesday with Parise missing, the Wild exhibited the kind of play they produced early in the season.

Although they have won just four of their past 15 games, there was zip in their play.

“We were short, that’s the bottom line,” captain Mikko Koivu said, “but I thought we had a good, 60-minute effort from everyone on the whole team, and that’s what we’re going to need to get out of this.”

Zucker, who scored his team-leading 15th goal and had five shots on goal, liked everything but the final score.

“If we play like that, we’re going to win games,” he said.

Pominville, whose goal and assist put him atop the team’s stats with 32 points, tipped his cap to Yeo’s tirade the day before.

“He wasn’t happy with what he saw and he let us know,” Pominville said. “It’s been a big story, but I think that was good; I think we needed that and guys responded the right way.”

With Kuemper on injured reserve for a lower-body injury, Nik Backstrom stepped in to stop 16 of 19 shots before the Hawks finished the evening with an empty-net goal.

Prosser worked out in the morning but sat out because of illness, and Ballard remains sidelined indefinitely because of a concussion and facial fractures.

In came Schroeder, a former Gopher, joining a line with former Gophers Vanek and Erik Haula and collecting a career-high seven shots on goal.

He earned praise from Yeo.

But Yeo, 36 hours after his eruption, had praise for just about everybody.

The team is not satisfied with a loss, he said, but players went hard after it all night and “that’s what we need right now.”