As an event, the Winter Classic lived up to the hype. The game? Not so much. 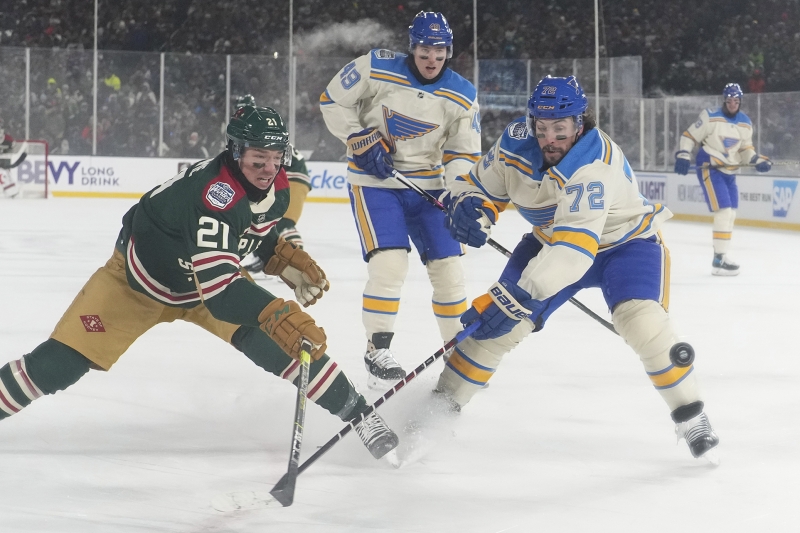 It was more than a decade in the making with a two-year build-up due to a pandemic-driven postponement and, with the exception of the Minnesota Wild’s performance, the Winter Classic lived up to the hype. Despite brutally-cold conditions, and a 6-4 win by the visiting St. Louis Blues, the NHL’s marquee regular-season showcase was a visually spectacular and parochial marvel. 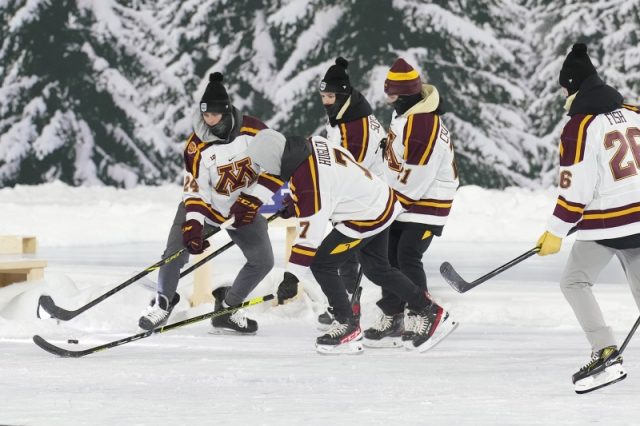 Members of the University of Minnesota men’s hockey team played shinny on one of the ten pond hockey rinks set up adjacent to the NHL rink. (MHM Photo / Rick Olson)

“It’s such a wonderful atmosphere,” Wild coach Dean Evason said after the team’s fifth-consecutive loss. “Obviously, you want to leave with a good feeling but there are so many great things that have happened here the last couple of days.”

“I was looking over my shoulder for a polar bear, that’s how cold it was out there,” Wild assistant captain Marcus Foligno said.  “To see the fans stacked to the top, bracing the cold, that’s why we have the best fans, I believe. You could hear them and the cheer when we scored, too, was kind of an echo and it was a great feeling to play in this game.”

The Blues, who bussed to Target Field and entered the stadium adorned in beach wear, may have had a psychological edge early on in a game which saw the temp at -5.7 degrees Fahrenheit at puck drop and plummet from there.

“You do suck a little wind out there,” Foligno said. “It’s tough to breathe that deep cold air but, I mean, you’re so caught up in the thrill of the game that it was a really fun atmosphere.” 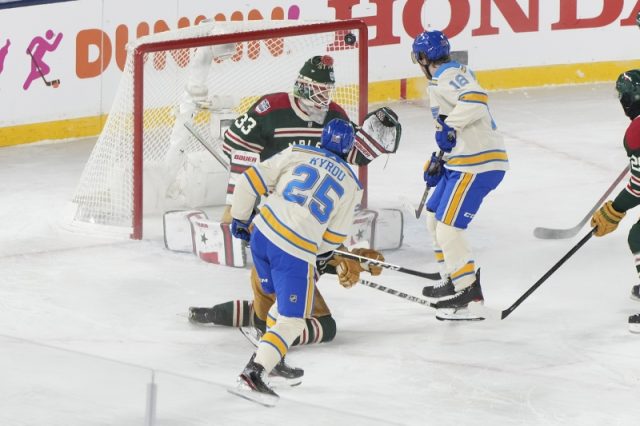 The game itself was primarily a 60-minute slog of a contest dominated by the Blues, a faster, more rugged squad for much of the night. Jordan Kyrou’s four-point (2-2–4) second period helped turn a 1-1 game into a 6-2 St. Louis lead after two periods and should have brought an end to Wild starting goaltender Cam Talbot’s rough night even if he hadn’t left the game due to a lower-body injury.

Wild coach Dean Evason doesn’t see it that way, however.

Goals by Ryan Hartman and Kevin Fiala and some too-little-too-late inspired play in the final period, after Kaapo Kahkonen was pulled for an extra attacker with more than eight minutes remaining in regulation, made it semi-interesting. The question is, where was that effort for two lackluster periods in a game with so much riding on it in terms of both playoff positioning and national perception?

“It’s embarrassing, I think, the first two periods,” Wild forward Mats Zuccarello said. “You have 40,000 people coming, freezing their asses off and we’re playing like that. … There’s no excuses. It’s cold, it’s cold for both teams, the ice is bouncy for both teams, they just outplayed us for 40 minutes.

“It’s unfortunate it happened on a great night like this when a lot of people leave their house in this cold to support us and we give them a performance like that.” 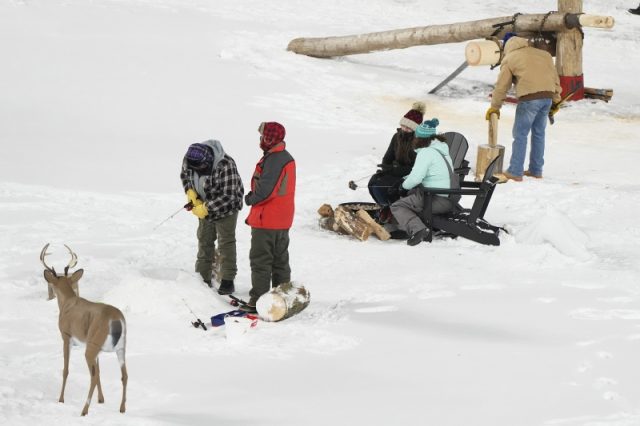 Deer “roamed” Lake Winter Classic as people fished and made s’mores over a fire pit throughout the game. (MHM Photo / Rick Olson)

Kirill Kaprizov came to play, potting Minnesota’s first goal just 25 seconds after Blues forward David Perron opened the scoring and chipped in two assists. But that goal, redirected off the stick of Blues defenseman Niko Mikkola, and Rem Pitlick’s shot that ramped up a stick before bouncing off the back of a completely unaware Blues goalie Jordan Binnington, was all Minnesota could muster for 40 minutes.

“They got to their game quicker than we got to ours and we didn’t get to ours, obviously, until the end,” Evason said. “We talked to the group about our sense of urgency has to be way quicker than the last 10 minutes of a hockey game when we’re pulling goalies.

“They advanced and then they used their skill to score goals once they got in there.”

That’s troubling, even with Joel Eriksson Ek, Jared Spurgeon and Jonas Brodin all sidelined. The same group somehow mustered 18 of its 33 total shots in the final period to finish with a flurry but it was still mostly a no-show performance. Opinions varied on the impact of the 11-day break between games leading up to the Winter Classic with Evason allowing for the fact his team was rusty.

“Hockey players need to play hockey, not practice hockey. We practiced well, got our touches and all that kind of stuff but, you know, you’ve got that rhythm of a season … and, unfortunately, now we’ve got another four days before we get going again.

“The situation is exactly what it is and we’ve got to find a way to correct our game here real quickly.”

Zuccarello, on the other hand, refused to let himself and his teammates off the hook.

“It doesn’t matter, it’s a big game for us. We lost four in a row, we’ve got to come out with some push and urgency and we didn’t do it. I don’t care when we last played, that is not acceptable for us as a team. I think we all know it.”