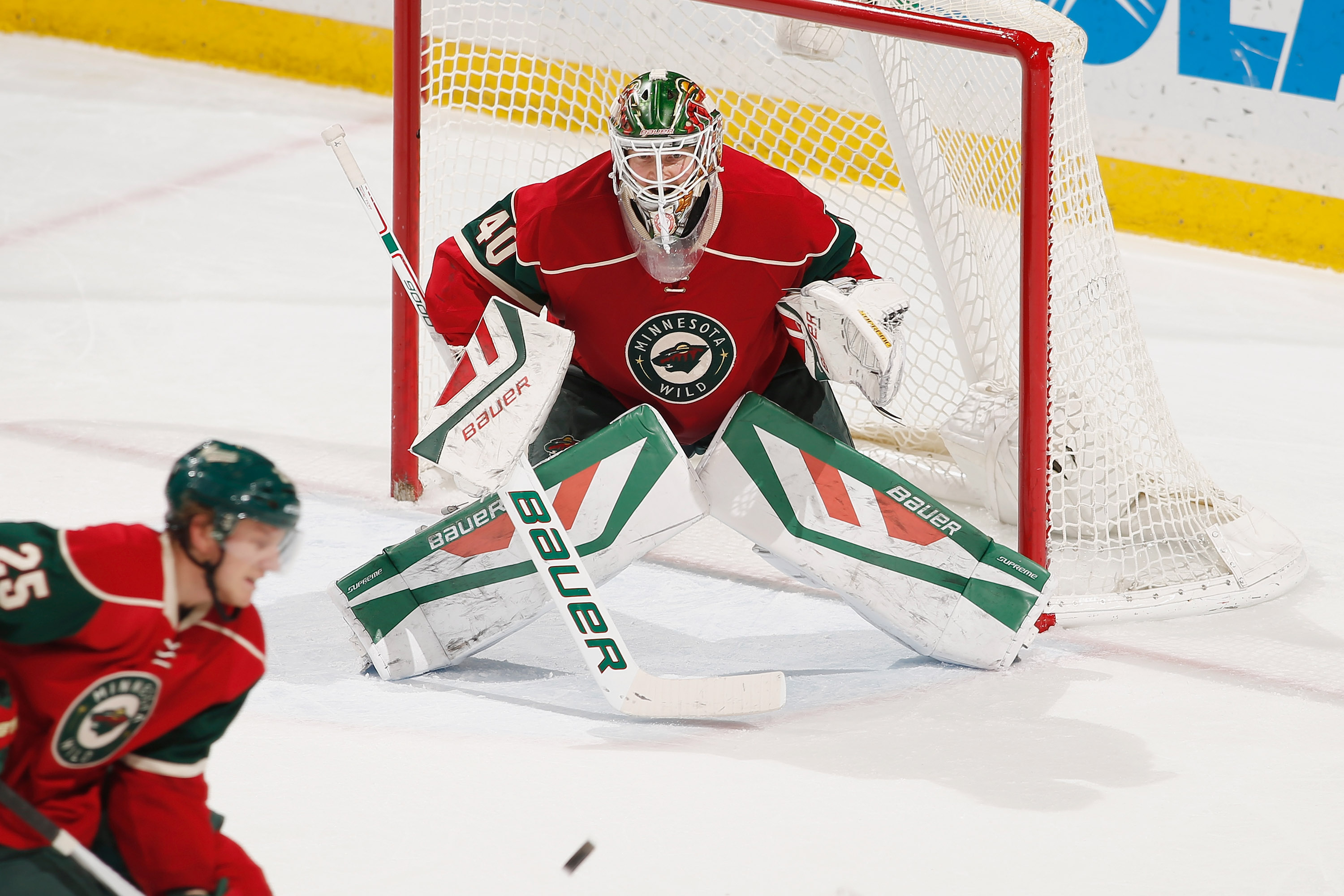 Devan Dubnyk had plenty of reason for his concentration to wander during the Wild-Toronto game Thursday night at the Xcel Energy Center.

The due date for his and his wife’s second baby was less than 24 hours away, and Toronto limped into town on the heels of a 6-1 loss at Winnipeg Wednesday night, owning a reputation for focusing on defense as well as an unspectacular 8-12-5 record.

Then Minnesota outshot the Maple Leafs 12-8 in a one-sided but scoreless first period.

None of that fazed Dubnyk, who recorded his fourth shutout of the season as the Wild sidestepped the defensive-minded Leafs 1-0 in front of 18,880.

Dubnyk made 28 saves, got help when teammate Mikko Koivu swept a loose puck away from the open side of the net in the third period and happily accepted a thumbs-up ruling for a coach’s challenge that wiped out an apparent goal by Toronto with four minutes remaining.

Nice turn of events, he said with a grin.

“I had no idea. I said to these guys after, ‘It’s the rare one-goal-against shutout.’ You don’t see it too often,” he said.

Dubnyk has exhibited stellar play over his past two games even though his wife is expecting.

Well, he observed with that same grin, the baby seems to be in no hurry and will show up when it’s ready. So the veteran goaltender is choosing to simply clock in for another day at the office, aware that he can scurry to the hospital when it’s necessary.

And his work matches any expectations.

Dubnyk is staying in the moment.

“I just tried to relax a little bit and just keep things small,” he explained. “When things aren’t always going your way, you start to slide toward thinking about winning the game and the end result of the game. You get away from just being set and pushing and stopping and having those feet set. You try to do that, and I was able to do that the last couple of games. I felt good.”

This game would have resulted in a major disappointment for the Wild, what with Toronto being a pest all evening, cluttering up the neutral zone and making it difficult for the Wild to generate any offense.

“They clogged it up pretty good,” forward Chris Porter said.

Not a welcome arrangement for a team that had seemingly snapped out of its doldrums with a hard-fought 2-1 triumph over the Blackhawks in Chicago two nights earlier.

However, as Yeo pointed out, a loss to the struggling Leafs would have ushered the Wild right back behind the 8-ball where they resided after winning just one game out of seven before heading to Chicago.

“If we don’t come out here and get a win today,” he said, “then a lot of the same questions and frustrations just come back after a great performance in Chicago.”

The Wild dodged those questions and frustrations by utilizing Dubnyk’s second shutout in five games along with a power-play goal by Matt Dumba.

Dumba uncorked his blast from the left point after a pass from Jared Spurgeon at the 9:24 mark of the second period, giving the Wild their first shot on goal in more than 16 minutes.

“It was perfectly placed by Jared,” Dumba said. “We practice it a lot.”

Three games ago, Yeo challenged Dumba to tighten up his play.

And the Wild have, too, snapping a three-game home losing streak.

Best of all, at least in Dubnyk’s thinking, is they have another home game Saturday night against Colorado before they hit the road to play at Colorado on Monday.

That means Dubnyk will be able to keep his feet firmly planted on Minnesota soil for at least a few more days while he waits for child No. 2.