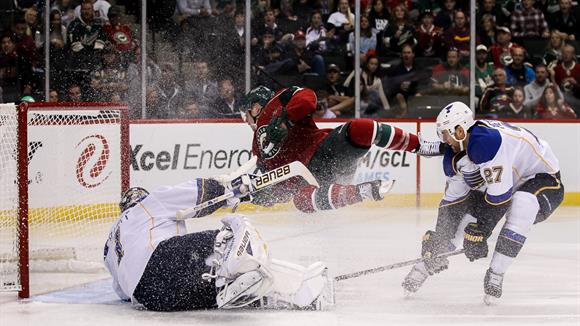 With the preseason drawing to a swift close Mike Yeo is looking to solidify lines through trial by fire.

It was all business Wednesday night as the Wild took the ice at home against the St. Louis Blues. Wild coach Mike Yeo went into the evening with the intention of mixing up lines and seeing which players were truly dynamic pieces.

“We wanted to give some of the lines a chance to get together and play a few consistent shifts in a row together,” says Yeo, “There are some guys who are auditioning who need to play with some certain types of players.”

The Wild would ultimately take the contest going 3-1 over the Blues despite being outshot 34-23 by St. Louis. With the preseason drawing to a quick close, Yeo was clear in 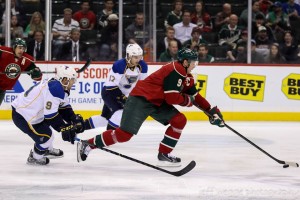 Captain Mikko Koivu’s line is the only one set to begin the season.
(MHM photo / Copyright, Jeff Wegge)

that what matters right now is getting a solid team put together, “Our priority has to be on our core guys.”

One thing to keep in mind during the preseason is that the team is not set and the young players have to make a big impression with limited amounts of time. As Yeo pointed

out, “It’s important for a young kid to take advantage of every shift and every practice day.”

Every shift truly matters and at the close of the fifth preseason game Yeo wasn’t crazy about the play of Jason Zucker, while Nino Niederreiter and Justin Fontaine took better advantage of their opportunities according to Yeo.

Putting the focus on St. Louis, Yeo said St. Louis “is a tough team to play against” and he used the opportunity to see where his team is at defensively. As far as the Wild’s own defensive posture, Yeo was clear in saying he wants his team to utilize more of a four man attack off the rush.

“In order for that to develop, in order for that fourth man to be a factor, we have to be gaining the zone with control,” Yeo said. “Our defensemen are part of the forecheck but that’s not the goal here…we’ve got to make sure we’re not a high risk team but at the same time we’ve got to recognize support, recognize opportunities and take advantage of them.”

As Friday’s last preseason contest against the Blues approaches, many questions still remain as to which of the young players will begin the season in Iowa and which will remain in the state of hockey come the home opener on October 3rd.

“Friday is big for all of (the players),” Yeo said. “I wish that I could sit here and say that I have a real good grasp of how we’re going to start the season or even what the make up of our lines will be. We have more players, we have more depth, and with that we have more decisions.”

One player who appears to be in the good graces of Yeo is the young Charlie Coyle. Says Yeo, “With a young kid I don’t want to sit here and heap too much praise on him but I can’t say anything negative about his camp, he’s been outstanding. The challenge for him will be to keep it going.”

Coyle appears ready to play and ready to take the pressure no matter what is going on around him.

“I’m just trying to play my game no matter who I’m with,” Coyle said. “Its kind of fun playing with a new guy every shift…it’s not a bad thing.”

So at the end of hockey night in Minnesota the Wild celebrate a win (even with the officials missing an obvious goal by Niederreiter on a third period power play) and the Blues pack up and head home with both teams looking to take advantage of one last preseason contest to work out some details before the official start of 2013-2014 campaign.

**For all of your in game and up to date Hockey coverage in the great State Of Hockey be sure to follow us on Twitter@MNHockeyMag! You can also follow the author@AmySnow17!