Woe is the Wild 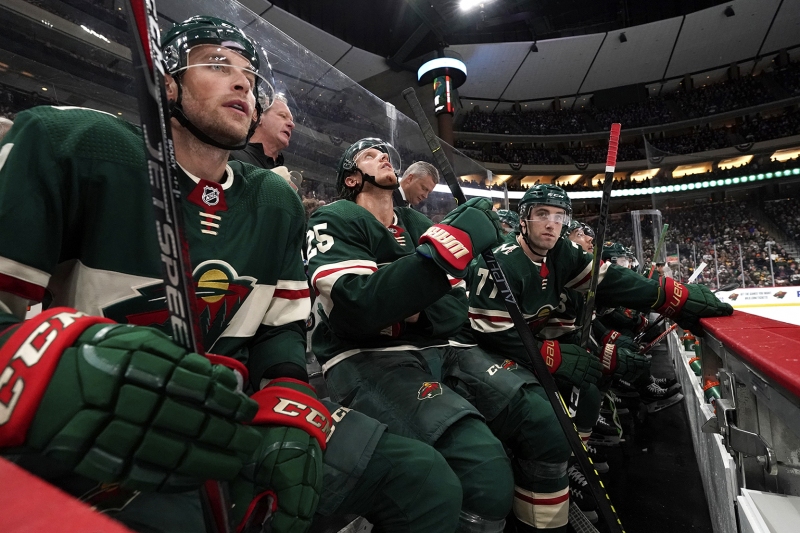 Wild defenseman Jonas Brodin (middle) appears to be pleading for divine intervention as fellow defensemen Carson Soucy (L) and Brad Hunt (R) look on in disbelief during the second period of Minnesota’s 2019 home opener, a 7-4 loss to the Pittsburgh Penguins on Oct. 12 at Xcel Energy Center. (MHM Photo / Rick Olson)

So far this season, the Minnesota Wild are proving there’s a first time for everything. Unfortunately for them, the firsts aren’t positive. Unless there are ways to positively spin an 0-4 start to the season.

“Every year you have to create your identity, and the good teams get to that identity right away,” said defenseman Ryan Suter. “The teams that struggle out of the gates, I think that’s a big part of it. They’re trying to find that identity.

The Wild arrived back at Xcel Energy Center with an 0-3 record to start the season. They’ve never lost three straight games in regulation to start a season, and they made it four in a row with a 7-4 loss to Pittsburgh in their home opener on Saturday night. They woke up Sunday morning as the lone NHL team with a zero in the points column.

That makes an 0-4 start in which the Wild have been outscored 21-10. About the only positive from their latest game was the fact that they finally scored more than two goals. Although it could be argued that the biggest highlight of the night was Mike Modano with the “Let’s Play Hockey!” call or the fitting tribute to honor Jim Bowers with a video showing him singing the national anthem before a North Stars game in the Stanley Cup Final in 1991.

Until we learn how to quit feeling sorry for ourselves, it’s not going to work.

After the home opener, Wild coach Bruce Boudreau didn’t single out any players but called on his team to shift from thinking about being 30 or 40-goal scorers to playing a 200-foot game.

And it hasn’t been. Of the Wild losses so far, it’s not like they’ve lost games 2-1 or 3-2 with some bad puck-luck. The Wild seemed to make their own bad luck in 5-2, 4-2 and 5-2 losses in a string of divisional games at Nashville, Colorado and Winnipeg. Each game, the Wild dug themselves a hole in a hurry.

In Nashville, the Predators scored a pair of goals 1:29 apart to take the lead for good in the third. They made it a three-goal spurt in about the first seven minutes of that period to take a 4-2 lead, getting one of those goals from former Wild player, Mikael Granlund. 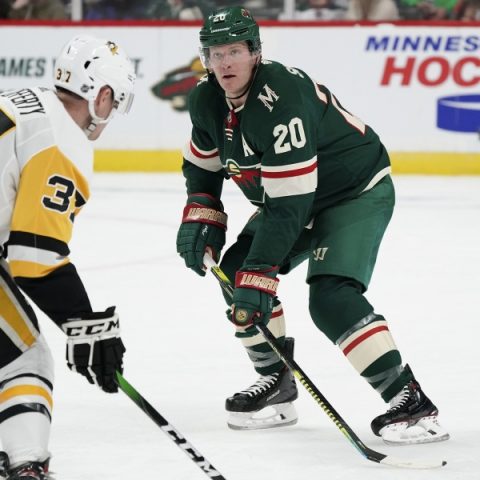 The Wild got behind early against the Avalanche, going down 2-0 in the first six minutes of the game with goals 1 minute, 27 seconds apart. In a tie game in Winnipeg, the Jets went up 4-2 in a flash with goals just 28 seconds apart. It was a 2-1 game in the home opener before a trio of Penguins tallies in 2 minutes, 28 seconds for a 5-1 deficit by the 13:39 mark of the second period.

The Wild have also allowed an empty-net goal in each game.

The formula for the Wild has been the same, allowing two quick goals, each time out, according to Boudreau.

“It’s like we get a woe-is-me attitude,” Boudreau said. “’Oh, we’re down,’ instead of picking up our shoes like we did the last five minutes (on Saturday) and saying, ‘let’s go get ‘em.’

“Until we learn how to quit feeling sorry for ourselves, it’s not going to work.”

After plenty of Wild fans had already flocked to the exits once the Penguins took a 6-2 lead with about 9 minutes to play Saturday, the Wild finally showed some life in the offensive zone. Defenseman Brad Hunt – with his second goal in as many games – got the Wild to three goals with a snipe from near the blue line. Luke Kunin scored 21 seconds later for a 6-4 game at the 15:44 mark.

Even when the Wild countered with their own quick tallies, it seemed to be a one-step-forward, two-steps-back scenario as they couldn’t hold the other team off the board. In Nashville, Jason Zucker and Matt Dumba’s goals 43 seconds apart gave them a 2-1 lead in the second before surrendering three third-period goals. The Wild had its first lead at 1-0 in Winnipeg thanks to Ryan Hartman. Against the Penguins, the Wild responded with a power-play goal in the second just 28 seconds after going down 2-0.

No one in the Wild’s lineup has played his “A game” for an entire 60 minutes, according to Suter.

“When we’re on, we look really good,” Suter said. “And then we start pressing too hard, I think, and then they get one and then two. You kind of go into a shell.”

The franchise-worst 0-4 start already surpasses the number of losses the Wild had in October last season, as they went 7-3-2 that first month last year. The Wild also fall to 14-1-4 in home openers played at Xcel Energy Center.

It’s a bad trend for a team that last season finished 16-18-7 on home ice (37-36-9 overall). Those 18 regulation losses set a team record for the most losses at home in a season, so it shouldn’t be a surprise that the Wild also set a team mark for the fewest points on home ice with 39.

Boudreau has often used the phrase “your best players have to be your best players” when talking about his team in the past. Well, through four games, it’s the third-pair defender Hunt as the team’s points leader with two goals and two assists. Zucker’s goal on Saturday was a deflection in the slot after a Hunt shot from the blue line. Marcus Foligno has three assists so far. Jordan Greenway, Wild-newcomer Mats Zuccarello and Ryan Donato (healthy scratch on Saturday) have not registered a point yet.

The Wild, who play six of their first seven games on the road, head out for a Canadian swing against Ottawa, Toronto and Montreal in search of their first win to try and stop the bleeding.

“You don’t get anything in this league,” said captain Mikko Koivu. “I don’t care if it’s game one or game 82. You’ve got to earn every single point in this league, and we’re not doing that right now.”

A victory would stop the season-opening skid from snowballing and provide a shot of confidence to his players.

“We have to figure it out quick, or it’s going to be a long year,” said defenseman Jared Spurgeon.