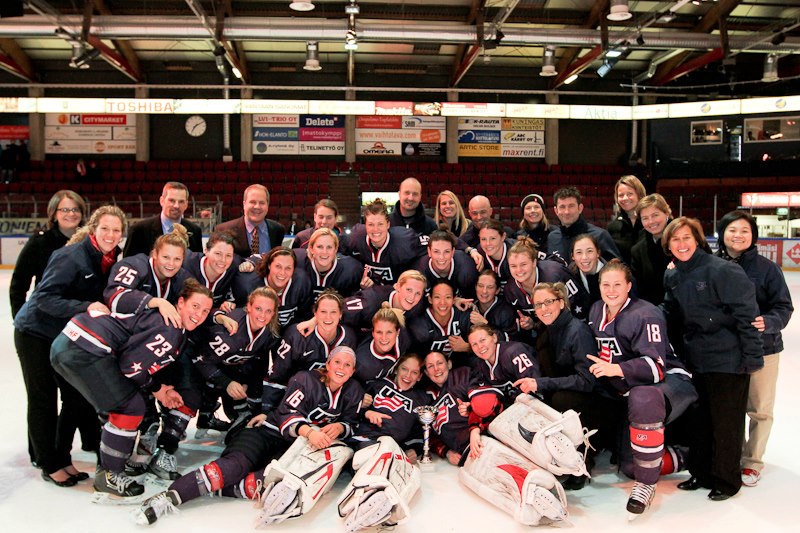 All WCHA teams but St. Cloud State and Bemidji State had last weekend off with attention focused on Finland and the 2012 Four Nation’s Cup, the annual tournament featuring the four of the top women’s hockey teams in the world – the United States, Canada, Finland and Sweden. 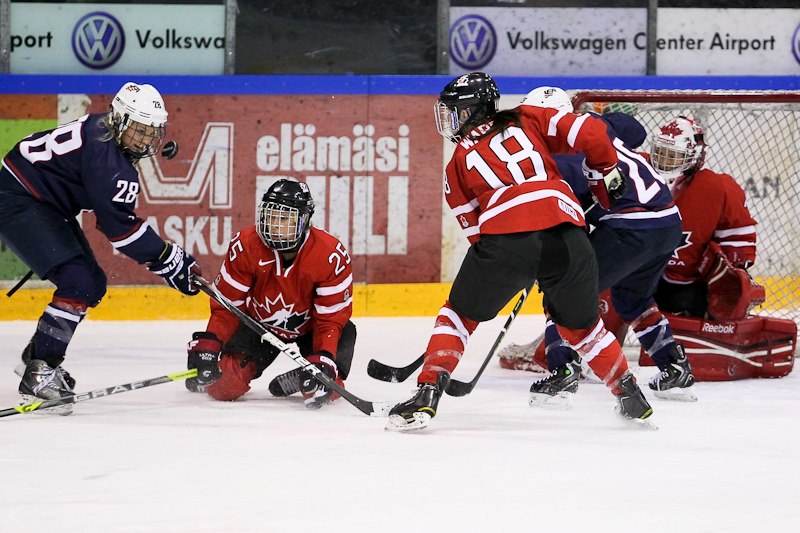 Amanda Kessel keeps a a close eye on the puck (Photo: Pekka Rautiainen)

The U.S. opened the round-robin tournament by shutting out Sweden 4-0 but dropped a 3-1 game to Canada the following day. Team USA closed out pool play with a 15-0 trouncing of the host country, Finland, to set up a rematch on Saturday with their arch rivals north of the border.

“I’m very happy as to how our team came together this week,” said Katey Stone (Arlington, Mass.), head coach of Team USA in a USA Hockey release. “We played tough, we played smart, we made some adjustments, we had great goaltending, and we played strong (defensively). I’m happy and proud of how (we) played.”

When the Beavers (2-6-2, 1-4-1-0 WCHA, 4 points) take the ice this weekend at the Sanford Center for their series with North Dakota, they will be doing so in a game setting for the first time in 26 days … With a loss and a tie at Maine last weekend, BSU wrapped its non-conference schedule with a 1-2-1 record … last Saturday marked the first time since Nov. 4, 2011 that Bemidji State was not issued a single penalty in a game.

The Bulldogs (3-6-1, 2-5-1-0 WCHA, 6 points), return to the ice this weekend when they face St. Cloud State in St. Cloud … The Bulldogs will go nine weeks before they host another WCHA team at AMSOIL Arena … The injury bug has devoured UMD this season with eight of the Bulldogs 19 skaters having missed at least a game this season, five of which have missed four or more games … UMD has converted only two of 33 power-play attempts and UMD’s scoring offense continues to rank as the worst in program history at this point in any of the previous 13 seasons.

The Mavericks (4-6-2, 2-4-2-1 WCHA, 9 points) return to WCHA play Friday and Saturday when they travel to Minneapolis to face top-ranked and unbeaten Minnesota at Ridder Arena … The Minnesota State penalty-kill did not allow a goal to Wisconsin on nine chances in its Nov. 2-3 series to improve to 27-of-31 (87.15) for the year, a mark that stands third in the WCHA … The Mavericks have made a habit of scoring late as 15 of its 21 (71%) goals have come in the third period.

The Huskies (4-7-1, 2-6-0-0 WCHA, 6 points) return to action this weekend as they welcome Minnesota Duluth to the National Hockey & Event Center for a WCHA series following last weekend’s sweep at home of Lindenwood by scores of 2-0 and 7-2 … SCSU outshot Lindenwood 46-21 in game one … sophomore Julie Friend recorded 21 saves in Friday’s shutout and improved her record to 2-3-1 on the season.

Heading to the polls ….

With so many teams out of action, there was very little movement in either poll this week. Ohio state’s move from 9 to 8 in the USCHO poll was the only change to affect a WCHA team. 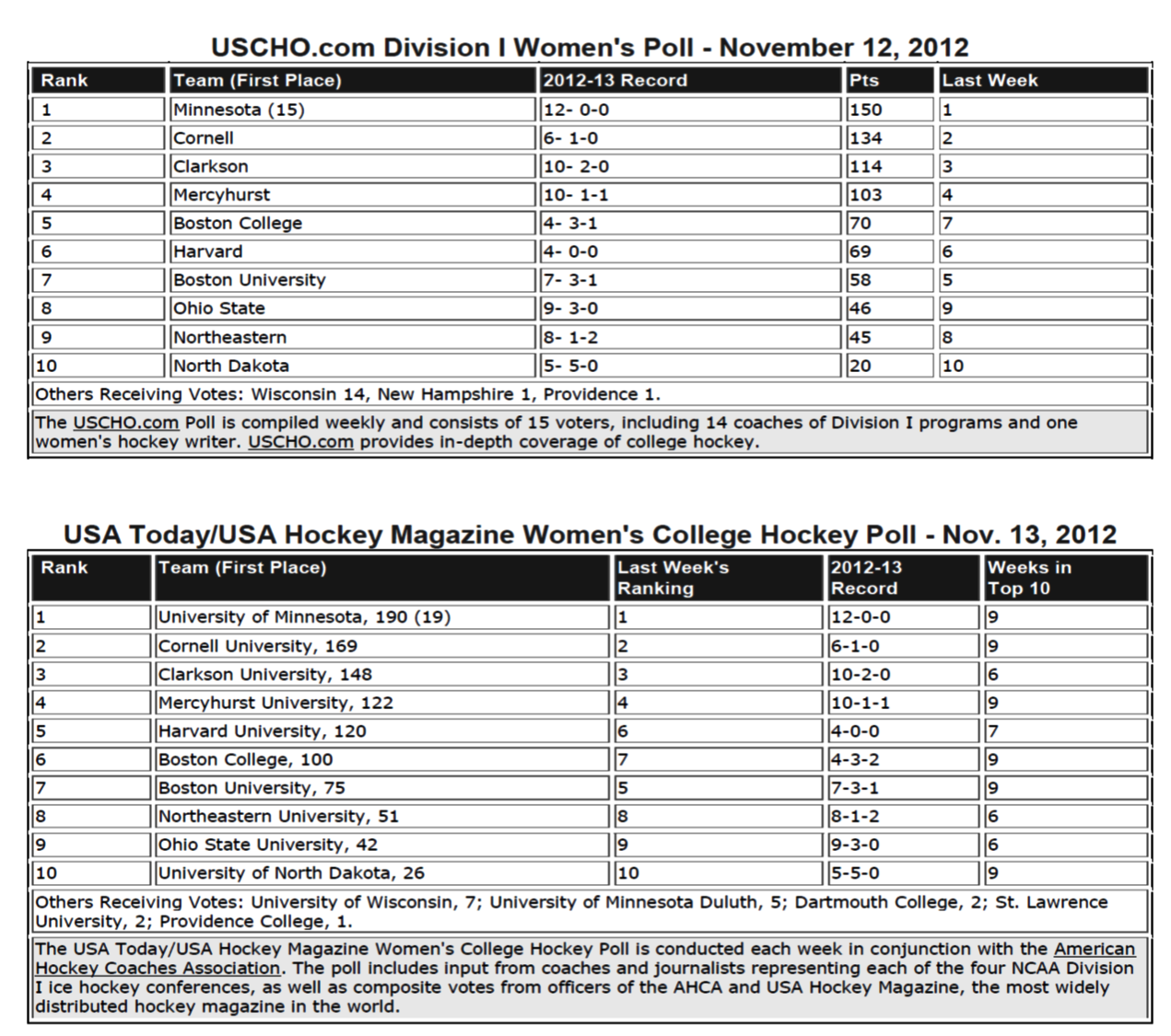 Players of the Week

St. Cloud State University forward Julia Gilbert, who was named the First Star of both games while scoring three goals and setting up another to lead the Huskies to a non-conference sweep over visiting Lindenwood University last weekend, has been named the WCHA Women’s Offensive Player of the Week for Nov. 14.

A junior from Hermantown, Minn., Gilbert also scored the first goal of both contests, recorded a total of 13 shots on goal and earned a +3 plus/minus rating. In host SCSU’s 2-0 victory over Lindenwood last Friday (Nov. 9) at the National Hockey and Event Center, she tallied her first goal of the season at 15:17 of the first period. Then last Saturday (Nov. 10), Gilbert fired home two goals, again notching the opening tally of the contest at 5:00 of the first period, and drew an assist for three points as the Huskies prevailed 7-2 in the series finale.

Through 11 games played so far this season, Gilbert is tied for fourth in team scoring with four points on three goals and one assist.

Goaltender Julie Friend, who recorded her second shutout of the season in St. Cloud State University’s 2-0 home-ice victory over Lindenwood last weekend, is the WCHA Women’s Defensive Player of the Week for Nov. 7.

A sophomore from Minnetonka, Minn., Friend stopped all 21 shots on goal against Lindenwood last Friday afternoon at the National Hockey and Event Center in St. Cloud and also blanked her opponents on all three of their power-play opportunities to earn Third Star of the Game honors. The shutout was the second of the season for Friend, who earlier fashioned a 39-save, 1-0, whitewash of league rival Bemidji State back on Oct. 13.

In 363:05 minutes of time between the pipes for St. Cloud State this season, Friend owns a 2-3-1 overall record with a 2.48 goals-against average and .928 save percentage. Her save percentage ranks fourth overall among WCHA goaltenders.

Bemidji State University forwardKaitlyn Tougas, who scored a goal and added an assist in the Beavers’ two-game non-conference series against visiting Maine last weekend, is the WCHA Women’s Rookie of the Week for Nov. 14.

A freshman right winger from Thunder Bay, Ont., Tougas scored the first goal of the game and also drew an assist in host Bemidji State’s 4-3 loss to the Black Bears last Friday (Nov. 9) at Sanford Center. Her goal came at 10:26 of the first period to stake her club to a 1-0 lead while her assist on freshman Hanna Moher‘s first career goal at 13:18 made it 2-0. In addition to registering two points, Tougas set up several other scoring chances as Bemidji State outshot Maine 60-20. In the series finale last Saturday (Nov. 10), Tougas had two shots on goal in a 2-2 overtime tie.

Tougas is currently tied for sixth in scoring overall among WCHA freshmen with five points (2g, 3a) in 10 games.

Armstrong tallied three points (1g, 2a) and six shots on goal on the weekend, including two assists in the 4-2 win against No. 5 Boston University and a goal at Providence in the 2-2 tie.

Nicole Anderson, PC (Sr., F, Jordan, Minn.) She tallied a three point game to lead the Friars to a comeback win over UConn on Saturday.

Maggie Pendleton, PC (Jr., D, Woodbury, Minn.) Notched three points on the weekend, including her first goal on the season on Sunday vs. UNH.

Audra Richards, Maine (Fr., F, Maplewood, Minn.) Picked up a goal in the 4-3 win over Bemidji Friday and had the winning shootout goal Saturday.