Yeo not happy with Wild after loss 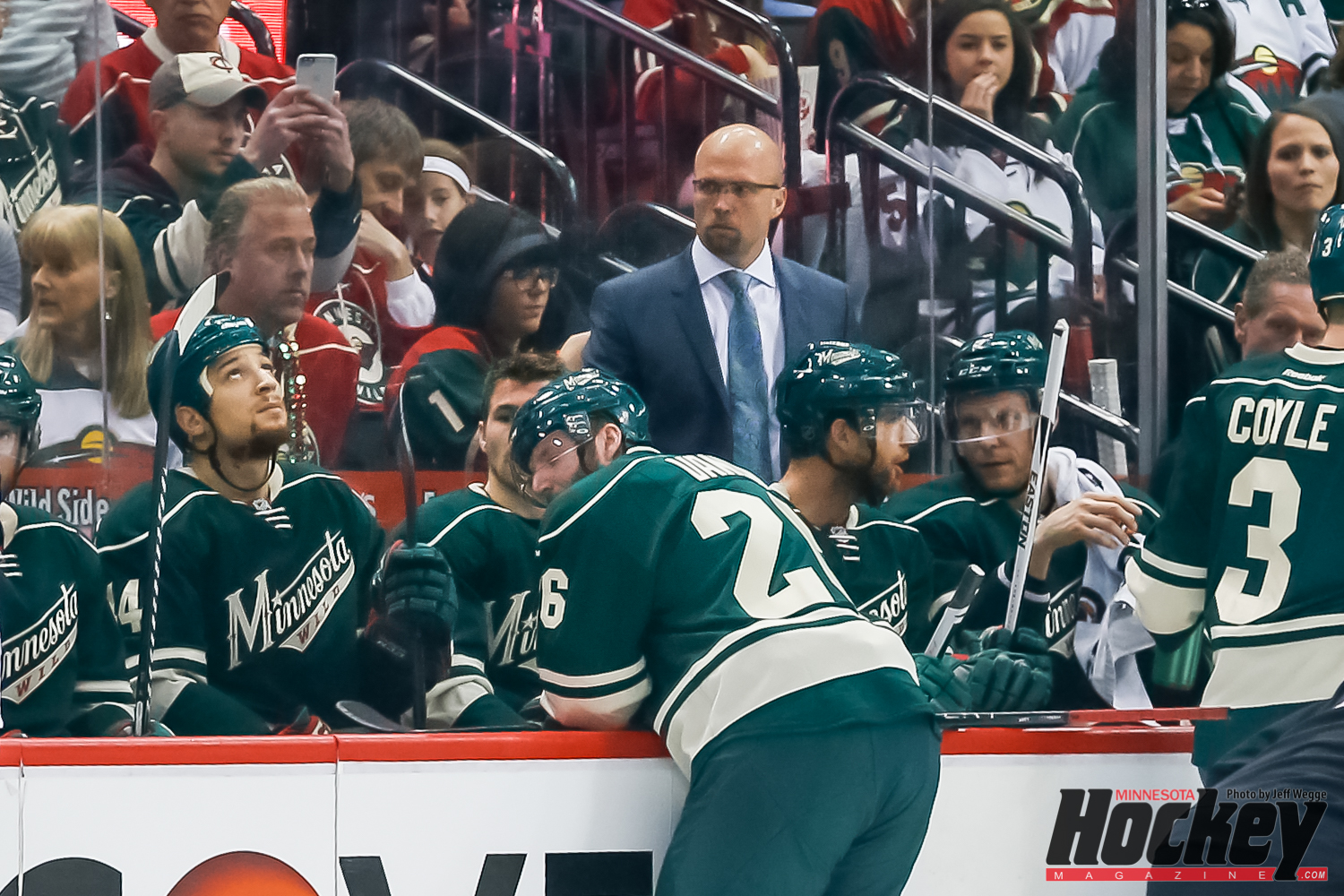 This was one game Wild coach Mike Yeo says has to serve as a lesson to his boys.

At first, it appeared to have the ingredients for something different: Through 19 minutes of the first period Wednesday night, a pre-Thanksgiving turnout of 18,877 Xcel Energy Center customers had every reason to feel in the holiday mood.

After all, the Wild were an NHL-best 8-1 on home ice, led the Vancouver Canucks 1-0 courtesy of Thomas Vanek’s team-high ninth goal of the season and seemed to be controlling play.

But this opponent was Vancouver, a team that had struggled to an 8-8-6 record coming into the evening but a team that has almost never been out of it against Minnesota.

A turnover with less than 30 seconds left in the first period led to the first of Radim Vrbata’s two goals and the Canucks – outshot 13-8 until that point – shifted into high gear to thump the Wild 3-2.

Many on the Wild felt they helped jump-start the Canucks’ offense.

Vrbata’s power-play goal at 11:15 of the second period gave the Canucks the lead, and Jannik Hanson got loose at 5:31 of the third period to score the winner. Coyle’s goal with 1:20 remaining and goaltender Devan Dubnyk pulled made it close, but the Wild could not rally further.

“Too little, too late,” Vanek said.

A team missing injured Zach Parise, Marco Scandella and Justin Fontaine is now 1-1 on a four-game homestand with games against Winnipeg and Dallas ahead.

“They’re obviously huge to our team,” defenseman Jared Spurgeon said of the guys missing, “but we can’t make excuses.”

Yeo was singing the same tune a few minutes later, noting that injuries offer other players a chance to make positive impressions. As well, he added, losing their one-goal lead and heading into the second period tied was no reason for his boys to cave.

“It’s a 1-1 hockey game,” he explained. “You’d think we should come out with a little more attitude to start the second period than we did.”

Asked what happened, Yeo warmed to the subject.

“What happened,” he said, “is we came out with half speed, half intensity, and made hope plays just to give the puck to them. The intensity part is the main thing, because when that’s not there, everything else is following suit.”

Yeo was not finished.

“Why it happened?” he said. “Probably because we spent all week talking about what a great home team we are, and tried to talk our way through that second period.”

The Canucks might not be Stanley Cup favorites at this point, but goalie Ryan Miller made 31 saves including some big ones during a final flurry, and they still have players named Sedin and Burrows and Edler and – of course – Vrbata.

Coyle asserted that that’s not enough reason to tip your hat to those guys.

“We kind of gave it to them. We weren’t even close to playing our game, winning battles. No sense of urgency,” he said.

The Wild came in after a 4-0 home win over Nashville and riding an 11-5-3 overall record, but players headed to their respective Thanksgiving dinners with sour tastes in their mouths.

“At the beginning of the year, it’s easy. Right now you have to be on top of your game. These are important points and it’s an important time to build your team and to trust your game and trust your teammates. Every time you are out there and you’ve got a shift, you’re either showing them that you’re trying to do things the way that we want to do them, or you’re not.”

“It’s one game we lost,” he said, “but we’ve got to bear down here and collect ourselves. There’s a lot of distractions this being home – you’ve got family – but we’re professional and we’ve got to find a way to make sure you prepare mentally.”

As Yeo talked, fewer than 42 hours remained before Minnesota’s 3 p.m. game Friday against the Jets. During those hours, it will be no surprise if he reminds his players of all those things more than once.