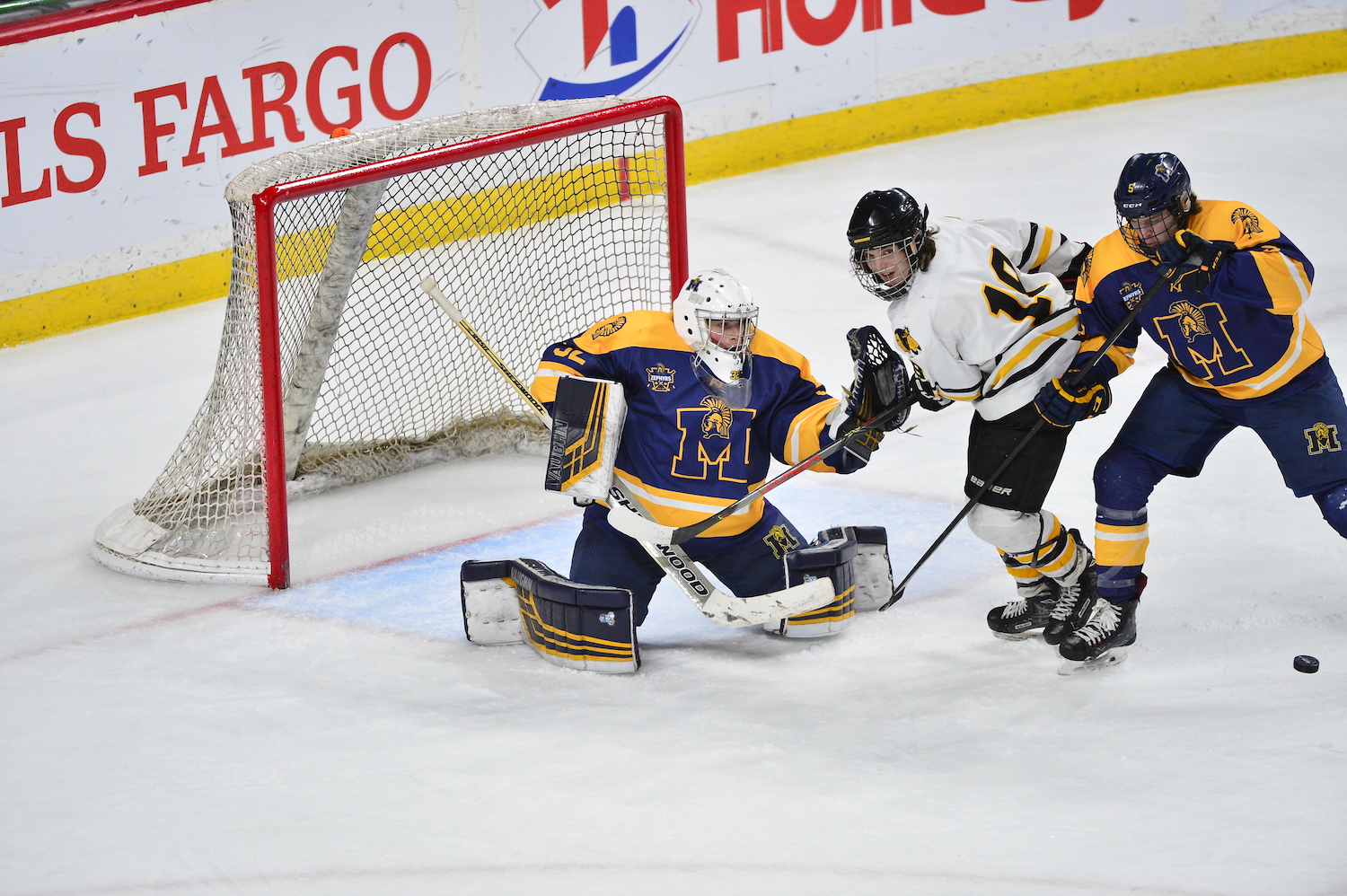 The Zephyrs have just never made it quite this far.

For the first time in its history, Mahtomedi will play for a boys’ state hockey championship.

“We’ve been here more than a few times and have not been able to break through that threshold,” said Mahtomedi coach Jeff Poeschl. “And so, it feels great.”

The 4-seed Zephyrs got there by bouncing top-seeded Warroad by a 5-1 score in Friday’s second Class 1A semifinal. Saturday will mark Mahtomedi’s first appearance in the title game in 12 state tournament trips. 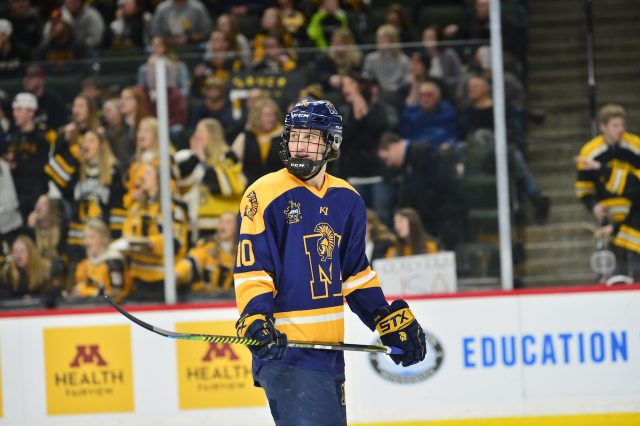 Mahtomedi’s Adam Johnson was all smiles after his two goals helped lift the Zephyrs into the Class 1A state title game with a 5-1 win over top-seeded Warroad on Friday afternoon at Xcel Energy Center. (Photo: Tim Kolehmainen / Breakdown Sports USA)

Yes, the Zephyrs are no strangers to the state semifinal game, which has provided a couple of heartbreaking results the past couple of years. They lost in overtime in each of the past two seasons in that game, last year getting upset as the No. 1 seed to Greenway and the year before to eventual champion Orono.

The difference this year was “naming the elephant in the room at the beginning of the season,” Poeschl said, at their first team meeting.

Friday, they came out prepared and shut down one of the best teams in the state, holding Warroad to a single goal.

“They did a great job of making it hard on us,” said Warroad coach Jay Hardwick. “We spent a lot of time in their zone. They had guys draped all over us. They were blocking shots.”

Hardwick added that Mahtomedi made the most of its opportunities. That’s for sure. The Zephyrs scored five goals on 12 shots; Warroad finished the game outshooting its opponent 30-18.

Senior Billy Buttermore gave the Zephyrs a 1-0 lead in the first period before senior Colin Hagstrom scored on the power play in the final minute of the period. Junior Adam Johnson bookended the scoring for Mahtomedi in their three-goal second period, putting them ahead 3-0 at the 2:37 mark and then the 5-1 lead with 28.8 seconds to play in the period.

The goals looked identical, with snipes in the top, right corner. Johnson said it was fun to joke about those goals and that particular move on the bench, because “our JV coach actually doesn’t like it very much,” Johnson said.

Going for a state title Saturday should help.

“It feels great,” Johnson said. “And after losing to Greenway last year, it’s just been a drive, like a different type of mentality going into it.”

There was one player St. Cloud Cathedral coach Derrick Brown couldn’t stop raving about in the postgame press conference after his team was upset in the first Class 1A semifinal. And it wasn’t one of his own players.

“It’s (Joey) Pierce,” Brown said, of the Hermantown defenseman. “Numerous times he killed us in the neutral zone. He stepped up, made plays.

“It’s Joey Pierce that does everything for them. I thought he was the difference. We could not generate offense when he was out there.”

Pierce, a junior defenseman, had a goal and two assists in the 6-2 Hermantown win to send the Hawks back to the Class 1A championship game. As the 3-seed, Hermantown upset 2-seed and defending champion Cathedral. 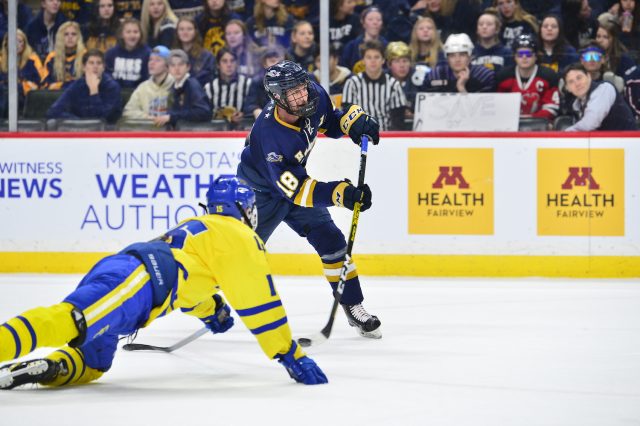 Hermantown took a 3-0 lead in the second period on what turned out to be the game-winning goal from senior Cayden Sunde. His sharp-angle shot from near the goal line found its way to the back of the net for his sixth of the season. Sunde had jumped up to the second line after another player went down with an injury.

Sunde was “kind of the ‘last guy,’ if you will” when the team was chosen back in November, said Hermantown coach Patrick Andrews. The coach talked to Sunde back in the fall, telling him he wasn’t sure how much he was going to play.

“Wow. Did that decision work out, eh Sunde?” Andrews said.

Cathedral got a goal from senior Nate Warner a few minutes later and trailed 3-1 headed into the final period, but the Crusaders were not deterred.

“I don’t think we had a doubt in our mind coming into the whole third period, being down two,” Warner said. “We’ve been down a lot more than that the whole year.

“Everyone had it in the back of their mind that we were going to come back and take this one.”

Whenever Cathedral seemed to grab a little momentum, Hermantown made the hill a little bit more of a steeper climb. Blake Biondi’s goal to make it 2-0 with 1 minute, 40 seconds left in the first period came shortly after Cathedral generated some offensive-zone pressure.

It was a similar situation when Hermantown made it 4-2 on Pierce’s goal. On the play, Pierce took the puck up ice from his own zone, passed the puck to a teammate for the shot on goal, then picked up the loose puck and scored into a wide-open net with the goalie down having made a spectacular save on the initial shot.

“Joey’s unbelievable,” Andrews said. “He showed today why he’s the best defenseman in the state. Joey was the X factor.”

He’s a guy you want on your team, Biondi said.

“He’s got everything,” Biondi said. “He’s a heart-and-soul type of guy, and that’s why I think we’ve been winning games right now.”

The Hawks had six goal scorers in the game, including Cole Antcliff, Biondi, Sunde, Pierce, Ethan Lund and Zach Kilen with a short-handed empty-netter.

The game included a physical scrum at the buzzer to end the first period which resulted in full penalty boxes at the start of the second period. Ten penalties were assessed, including a pair of 10-minute misconducts to a player each from Hermantown and Cathedral.

Hermantown heads back to the title game. It won back-to-back championships in 2016 and 2017. They’ll face a pretty familiar foe in Mahtomedi. Hermantown won the other meeting between the two this season, 9-2 at home on Dec. 21, a game in which it outshot Mahtomedi 40-15. Pierce had a four-point game.

Poeschl said he’d like to believe that game result was an anomaly.

“They pounded us,” Poeschl said. “We’re a different team.

“But it’s also a kick in the pants. Make sure that our guys are going to be ready to go tomorrow night.”

Mahtomedi lost 4-0 to Hermantown in the 2018 third-place game as well.