Forever-linked Johnson, Harrington to go head-to-head from the bench 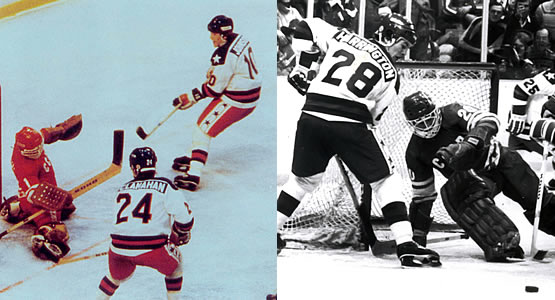 Forever-linked Johnson, Harrington to go head-to-head from the bench

They have trained together, played together on the most inspirational gold medal team in U.S. Olympic history and beat the USSR hockey juggernaut in the “Miracle on Ice.”

They have signed countless autographs while sitting by one another at memorabilia shows and stood next to one another while their teammates lit the Olympic torch. They have heard thousands of people go to the way-back machine and tell them where they were that February weekend in Lake Placid, N.Y. in 1980.

But they have never coached against one another – until this weekend in Mankato, Minn. when Mark Johnson leads the unbeaten University of Wisconsin women’s hockey team against first-year coach John Harrington and his über-young Minnesota State Mavericks.

“It will be awkward to see him on the other bench,” Johnson said. “The only time I ever coached against him was at fantasy camp at Lake Placid last March. My team won the gold medal.  John’s didn’t do so well.”

Johnson chuckled. He knows what a competitor Harrington is.  Sure enough, Harrington had a response for Johnson.

“I needed to fire my general manager who picked the fantasy team. Neal (Broten) was my GM and we had a poor draft,” Harrington said.

When it was suggested that Harrington has a tough time losing – at hockey or golf, or trivial pursuit, for that matter – the man known as “Bah” interrupted. “Mark is as competitive as I am. He just does it with a different demeanor than me.”

The friends and ex-teammates will come at this weekend’s Western Collegiate Hockey Association series with different perspectives. Johnson’s Badgers, an NCAA Frozen Four finalist last year, are unbeaten in eight games this season, have outscored opponents 42-2 and have registered a program-record (and WCHA record-tying) six-straight shutouts in league games. 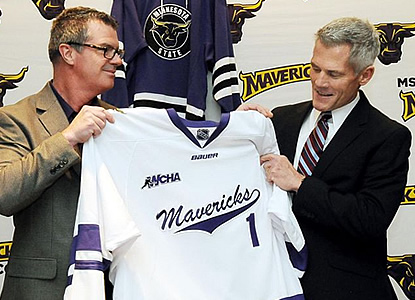 Harrington’s Mavericks have yet to win a WCHA game and are 2-7-1 overall. The Mavs dropped a pair of games last weekend at Ohio State while skating 17 freshmen and sophomores. “We have two seniors and one hurt her ankle and the other had a concussion,” said Harrington. “We have a lot of growing pains, but our team is getting more accustomed to the pace of the league and getting better each week. But here comes Wisconsin who hasn’t allowed a goal to anyone and we are averaging 1.1 goals a game.

“I just hope Mark takes it easy on us,” Harrington said. The tone in his voice said Harrington’s team won’t roll over for the Big Red.

Harrington and Johnson have come a long way since being fresh-faced kids who stood on the podium at Lake Placid 35 years ago with gold medals around their necks, while the national anthem played and the country’s sports fans became hockey fans filled with patriotic frenzy.

They were “Bah” and “Magic” then. Harrington was a member of the Conehead Line with Mark Pavelich and Buzz Schneider, while Johnson earned the nickname Magic for his play as the Olympic team’s leading scorer. Now they are they are called grandpa around their families. Both are 58 years old, but still are in great shape physically – probably below the weight they played at in Lake Placid. Harrington works out religiously and Johnson ran his seventh Ironman Triathlon with his son Patrick over Labor Day weekend.

Before they became teammates on Herb Brooks’ 1980 Olympic team, Harrington and Johnson played against each other in the WCHA. Johnson played for his dad, the iconic Badger Bob Johnson, at Wisconsin, scoring 40 goals as a freshman in his hometown of Madison, Wis. and winning a NCAA title in 1977. Mark was an All-American who scored 125 goals and had 256 points in three seasons at UW.  Harrington was an overachieving, walk-on from Virginia, Minn. who played at Minnesota Duluth and became a force in the WCHA while playing on a line with fellow Iron Ranger and future Olympian Pavelich.

Following their collegiate careers, Johnson was the leading scorer on the U.S. Olympic team with 11 points, including two goals against the Russians, and Harrington was credited with an assist on Mike Eruzione’s go-ahead, game-winning goal against the Soviet Union in the “Miracle on Ice” semifinal win. Harrington also played on the 1984 U.S. Olympic Team, while Johnson went on to an 11-year career in the National Hockey League, including a 1983-84 season with Hartford when he was the Whalers’ leading scorer with 87 points and tied an NHL All-Star Game record with three assists.

Johnson and Harrington are the only two members of the 1980 U.S. Olympic team to be actively coaching, after Mike Ramsey left the Minnesota Wild’s NHL organization two years ago. Both proudly consider themselves career coaches. Harrington has won titles as a Division III coach, a European pro coach; and, he won a pool B title as Team Slovenia’s head coach at the world championships. Johnson has 368 career victories in 13 seasons at Wisconsin, fourth best all-time in women’s collegiate hockey and 18 wins away from tying former Minnesota Duluth coach Shannon Miller for third place.

“All kidding aside, this will be exciting, coaching against Mark,” said Harrington. “He is one of the great coaches in women’s hockey. I have watched his games in the past as a fan but now, when I study his team on video more closely, I am impressed at how well they do the little things. They have a lot of talented players, but they are just a well-coached team.”

After Johnson’s playing days ended in 1993, he returned to Madison and started at the bottom of the coaching rung. Johnson was an assistant coach at his alma mater, Madison Memorial High School. The next year he coached at Verona High School and in 1995 took a pro job in the Colonial Hockey League with the Madison Monsters, where he coached current North Dakota coach Brian Idalski.

In 1996, the legendary Jeff Sauer hired Johnson to be an assistant coach with Wisconsin’s men’s team, a position he held until 2002 when Sauer retired. There are many folks in Madison today that still wish Johnson succeeded Sauer, but UW athletic director Pat Richter chose to hire Mike Eaves, a former teammate of Mark’s. Johnson then applied to be coach of the UW women’s program, got hired and has experienced great success.

The success has not gone unnoticed. Johnson was named coach of the U.S. Olympic team in 2010 and the American women collected the silver medal, losing 2-0 to Canada in Vancouver, B.C. He has become the face of women’s hockey to many people in North America, but Mark is not the outgoing salesman of the game that “Badger Bob” was. He is more a teacher, quietly explaining the game to anyone who will listen.

You have to ask both Johnson and Harrington if you want to talk about what happened in the Olympics in 1980. Harrington said his new team has yet to ask to see his gold medal. Aside from signing DVDs from the movie “Miracle” or politely talking with fans who bring up Lake Placid in 1980 at the rink, they are unlikely to talk about the past. Harrington sold his Olympic jersey and other gear last year to help finance his daughter in nursing school. They still do the occasional autograph show to sign memorabilia and coached together at the 1980 team fantasy reunion camp last winter. But both guys are very much coaches now, concerned with the present and not living in the past.

Johnson, whose daughter Mikayla is a winger on his team, said “he was very pleased” with his third-ranked team’s two shutout wins over No. 6 Bemidji last week. “Bemidji has a good team. They can limit your chances, have a good goalie and some seniors that can score. When we got (Sarah) Nurse back (from missing two games with an illness) we had a complete team and a good effort.”

Now it’s a road trip to face his old friend and the Mavericks. 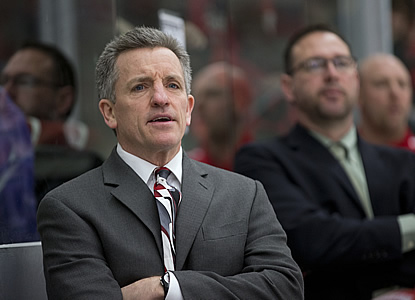 “I think it will be fun,” said Johnson.  “Of all the players on the (1980 U.S. Olympic) team, you are closer to some more than others and Bah is one of those I have always been friends with. We have kept in contact over the years. When he was coaching at St. John’s (in Collegeville, Minn.), we’d talk a lot and we have kept in contact regularly.”

Harrington was an assistant coach at Denver and St. Cloud State (men’s team) before becoming the head coach at St. John’s from 1993-2008, where he led the Johnnies to a 241-142-31 record, five MIAC regular-season titles, five NCAA Division III tournament appearances and four MIAC playoff titles. He coached pro players in Switzerland and Austria and coached the Slovenian national team before taking a scouting job with the Colorado Avalanche. During his tenure with the Avs, Harrington helped out as a volunteer assistant with St. Cloud State’s women’s team and enjoyed the experience.

“We’ve had other talks about coaching over the years, but last spring at fantasy camp in Lake Placid, I talked to him about the women’s game and how he enjoyed it and the transition he made from coaching the men (as an assistant) at Wisconsin to becoming the women’s coach,” said Harrington.

“We just talked about the women’s game, in general, and about the league,” recalled Johnson. “I am glad it all worked out for him. He is a very knowledgeable coach. I am sure he is finding his way around the league right now, but he has had a lot of success over the years and I am sure he will there.”

This weekend’s games will be the second women’s series held at the renovated Verizon Wireless Center after years at old, rickety All Seasons Arena, and it will be the first series overhead with a large jumbotron scoreboard overhead.

“It is awesome,’’ said Harrington. “It is a good-looking arena now. Everyone who has seen the place is very impressed.”

“The move to the big rink will give him a fresh start. It was a good time for John to go in there,” Johnson said. “Obviously moving downtown and them renovating their facility downtown and bringing the women’s program back to that facility is a step that’s going to be really positive for that group to start over.”

In future years, there may be bragging rights at stake when Harrington and Johnson go head-to-head. This weekend, it may be more of a reunion, a time to catch up with an old friend who is starting a rebuilding project.

“John has a great track record with a lot of different programs,” said Johnson. “It will be his first time with the women’s side, but I think he’ll do a good job and have an opportunity to put women’s hockey on a different level in his city.”