Pioneers Parade To 2A final 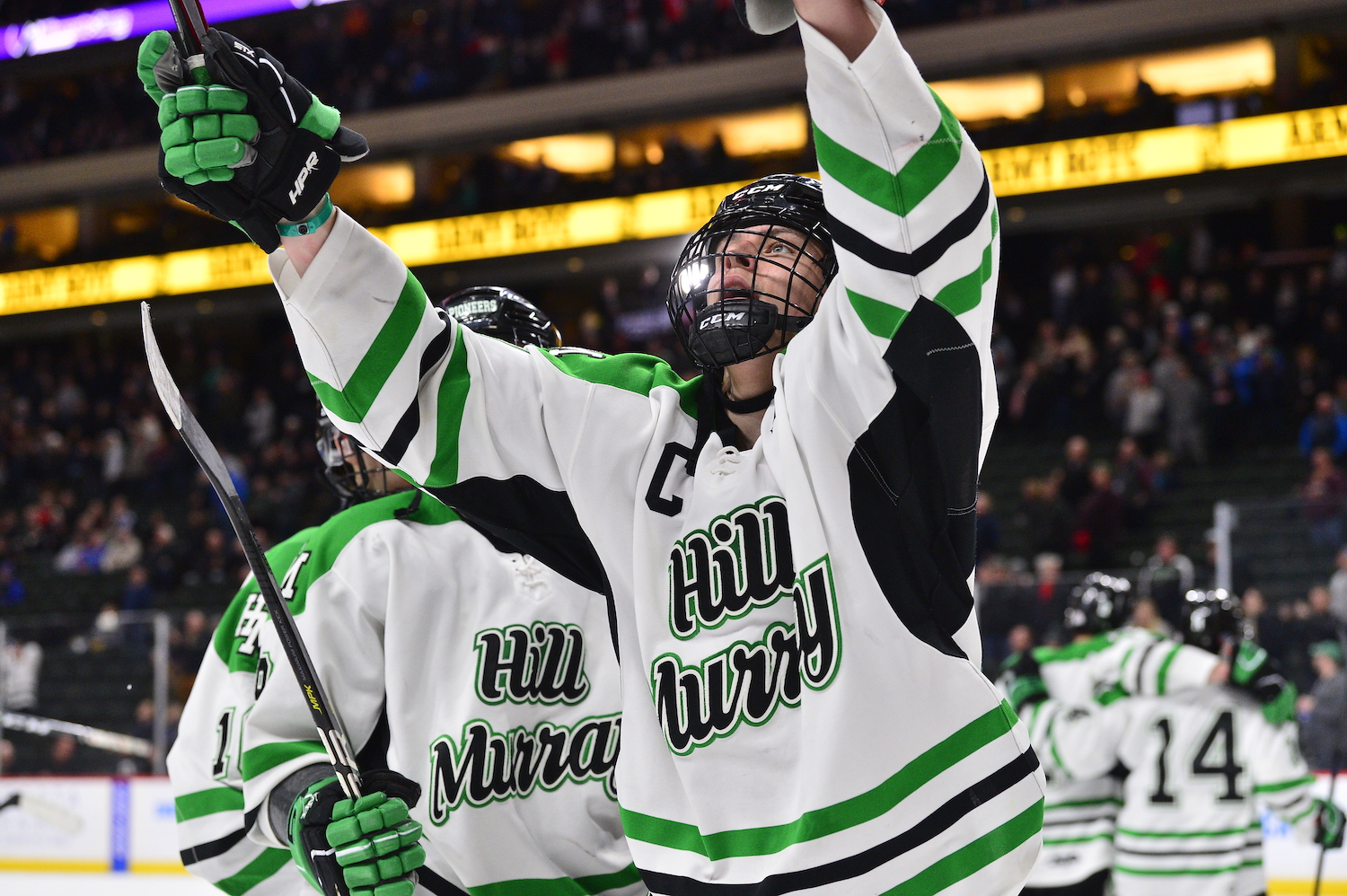 SAINT PAUL – Every game in both classes of the boys state hockey tournament had been overtime-free. Running time? Check. A one-goal game? Just one of those. But overtime?

Not until late Friday night in the second Class 2A semifinal.

In the final 30 seconds of the first overtime period, it was Hill-Murray senior captain Charlie Strobel who got just enough of his stick on the puck in front of the net to send it toward the goal line and it eventually trickled over the line.

“It was an unbelievable feeling,” Strobel said. “I felt us, as a team, gave it our all. We’re a pretty tight group. And I just tried my best to get it in the back of the net.”

The goal, coming with 21.4 seconds on the clock, sent the Pioneers to the state title game with a 3-2 victory over unseeded St. Thomas Academy.

Hill-Murray outshot the Cadets 8-0 in overtime. Coach Bill Lechner called Strobel the “heartbeat” of the team.

“It makes you feel good as a coach that they were prepared for overtime and still had a jump in their step,” Lechner said. “I could truly tell that they weren’t going to let this one go.” 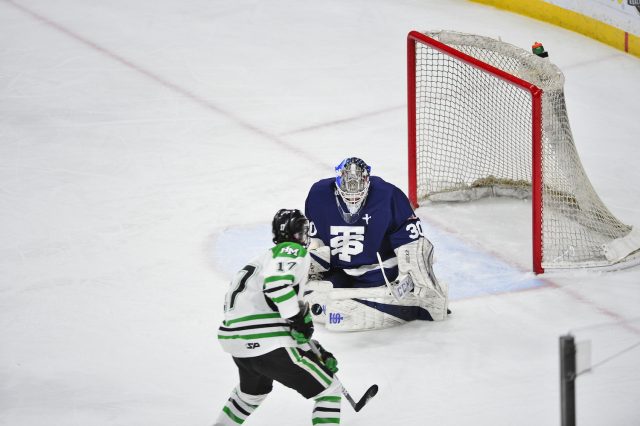 The fifth-seeded Pioneers grabbed the lead thanks to a pair of early, power-play goals from sophomore Dylan Godbout. His first came just 1 minute, 28 seconds into the game. He made it 2-0 nearly five minutes later. Hill-Murray came out with the fast start, outshooting the Cadets 11-5 in the first period.

Sophomore Nick Pierre, who had two goals and an assist in the quarterfinals against Moorhead, assisted on both goals.

That took a hit just 59 seconds into the third period, when Riley O’Brien got in tight and fired a high shot over the blocker of senior Hill-Murray goaltender Remington Keopple to make it 2-1.

A power play later in the period helped St. Thomas Academy tie the game at 2 apiece with 6:16 left in regulation. Senior defenseman Charlie Killian’s point shot found its way through and bounced into the net.

The Cadets have just two losses on their schedule since Jan. 30 Both of them have been by 3-2 scores to Hill-Murray. They’ll play for third place for the second consecutive year.

The Pioneers are in search of a fourth state title in program history, and second since the two-class tournament started in 1994, the last title coming in 2008. They were last in the title game in 2012 and 2013, finishing as the runner up. They also hold the tournament record for most times as the state runner-up with eight.

Eden Prairie back to title game

Probably the most entertaining thing to watch in the first Class 2A semifinal game between 3-seed Eden Prairie and 2-seed Blake was the goaltending. It made picking a “save of the game” difficult for those that wanted to do so.

“Man, when Axel (Rosenlund) was called on, he was great in net,” said Eden Prairie coach Lee Smith.

With 33 shots on goal apiece, senior Rosenlund made a couple more saves – 32 – than his counterpart at the other end in order to secure a 4-1 Eden Prairie victory for a second straight state-title game appearance on Saturday night.

Rosenlund and Blake’s Aksel Reid, a junior who made 30 saves, helped keep the game scoreless through nearly two periods Friday.

It was hard to count just how many acrobatic and spectacular saves Reid made during the game, especially during a flurry in the second period. The puck was sitting in the crease at times, with Eagles players whacking at it and Reid jumped around the blue paint, said Eden Prairie senior forward Ben Steeves.

“We knew we were going to score eventually though, because that’s how we are,” Steeves said. “We’re persistent, and we battle for pucks.”

Steeves broke the scoreless tie with 40.9 seconds left in the second period. It was a play that wasn’t a dirty goal from crashing the net, or a deflection off someone’s back in front. No, Steeves simply sniped a shot high on the blocker side for the 1-0 lead.

Blake had a scoring chance of its own about 30 seconds before that, with a shot that rang loudly off the goal post. 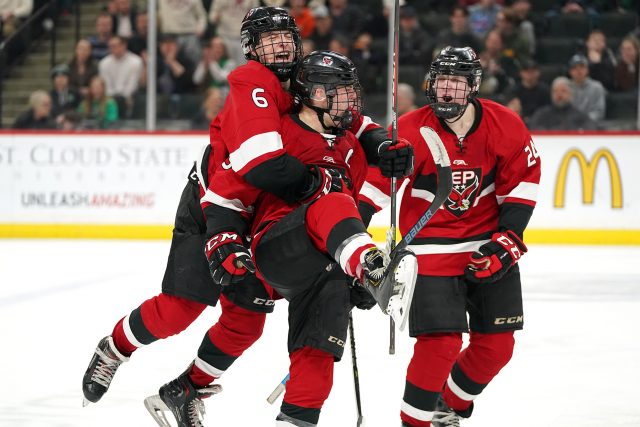 In the third, teams traded early power plays and chances, but it remained a one-goal game until sophomore Jackson Blake gave the Eagles a cushion with 6:27 to play in regulation. He took the puck from the top of the offensive zone and walked right into the slot for the 2-0 lead.

“I didn’t even know it went in until five seconds after,” Blake said. “I saw the boys chasing after me.”

But the Bears made a game of it late as well, when senior defenseman Will Svenddal’s shot from the blue line on the power play was tipped by junior Thomas Nelson on the way in to make it 2-1 with a little more than three minutes to play.

The dagger came with 1 minute, 55 seconds left when senior John Mittelstadt fired an absolute blast of a slapshot into the net to regain the two-goal lead. An empty-netter with less than 10 seconds left capped the victory.

Bears coach Rob McClanahan said he was “not at all disappointed” with how his team played. He also commended both goaltenders and said Reid “played the game of his life.”

“It was a spectacular game,” McClanahan said. “A game like that, it’s too bad someone has to come out on the short end.”

The Eagles are in search of redemption after last year’s overtime loss to Edina in the state championship game. Now they’re back again, hoping to secure the program’s third title and first since 2011. The Eagles have come up empty (that is, without a state title) in five trips since.

Eden Prairie and Hill-Murray have not faced each other this season.

Rosenlund was in net for the Eagles last year at the state tournament. He and Smith noted that experience is a positive boost this year. He’s been nice and calm in the net, Smith said.

“We were so close last year,” Rosenlund said. “Everyone was just waiting for this opportunity since the start of the season. I’m just trying to hold the fort down and give our guys a chance.”