Who is Behind that Mask?

The clues can often be found in its artwork. 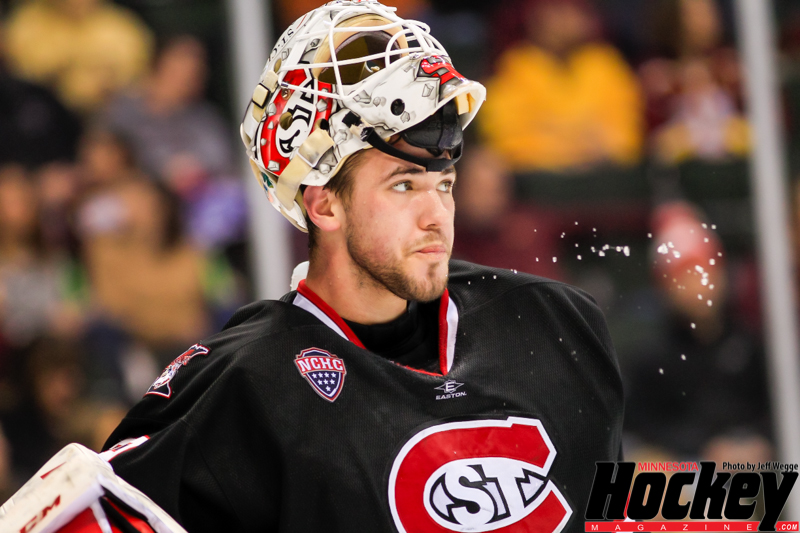 The clues can often be found in its artwork.

In some respects, hockey players, especially goaltenders, are some of the most hidden figures in sports, considering the amount of equipment that prevents the world from seeing the players within.

While many things have changed in the world of hockey, with the masks eventually becoming helmets, seeing them painted and carefully designed is nothing new for the recent goaltending generations.

Since the initiation of the goalie mask by Montreal Canadian’s Jacques Plante in a 1959 game against the New York Rangers, goaltenders have utilized the opportunity to show their colorful personality on its canvas.

Doug Favell, goaltender of the 1971 Philadelphia Flyers, became a catalyst for the painted mask after transforming his protector for the Halloween night game against the LA Kings. Favell told his trainer, Frank Lewis, during the team’s morning skate that it’d be kind of cool to paint his mask orange to go along with their orange jerseys, replicating the great pumpkin for Halloween night.

Gerry Cheevers, many have argued, was the first to “design” a mask, taking teammate Favell’s painted idea and upping creativity to the next level, with what fans have voted on as the best mask of all time. Cheevers’s top tier mask was based on putting stitch marks over the white canvas every time he got hit in the mask by a puck.

The masked men have always been known for their “interesting”, personalities and with the help of Ilya Bryzgalov’s performance on NHL 24/7, we’ve seen that not much has changed.

With such bizarre or colorful personalities behind the mask, it was only a matter of time before it leaked through onto the blank canvas that prevented an abundance of stitches and missing teeth.

However, it’s not necessarily about the things you see on the helmet, but the psychological foundation on which it was selected. Throughout hockey, relatives, music, animals, and essentially anything of personal importance or that looks cool has been plastered on the goaltenders’ canvas.

“When I decided to make my move to goalie, that’s one of the first things I looked forward to,” SCSU goaltender Charlie Lindgren said. “It’s something that every kid looks forward to, designing their equipment … especially with helmets; it’s a part of you.”

“With the goalie mask, you’re allowed to put your own personal touch on it; I think that’s something that started… goalies started wearing the mask,” SCSU goaltender Ryan Faragher said. “We’re different than the rest of the players on our team and we get to show it in our designs.”

“It’s something every kid looks forward to; it’s nice to look good when you’re out there,” SCSU goaltender Joseph Phillippi said with a smile.

No different than the generations preceding them is the SCSU men’s goaltenders Faragher, Lindgren, and Phillippi, all of which remember their first painted helmet like it was yesterday.

“I was 12, playing for the Minnesota Iceman,” Lindgren said. “I did a light blue helmet with a panther clawing its way out.”

“I was in ninth grade (when I got my first painted mask),” Phillippi said. “My dad told me that if I got on the honor roll three-out-of-four quarters that he’d get my helmet painted.”

“I didn’t have any say in my first helmet,” Faragher said. “My dad did it for a Christmas present when I was 13, my nickname was Rhino so we had a rhino on it… it was pretty cool, I was really excited.”

Goalies have often faced the challenge of finding a balance between glorifying and representing their team, all the while mixing in their personal passions into the design. Faragher seems to have found that balance with his current cage, keeping those things and people he loves as close to his mind as possible. 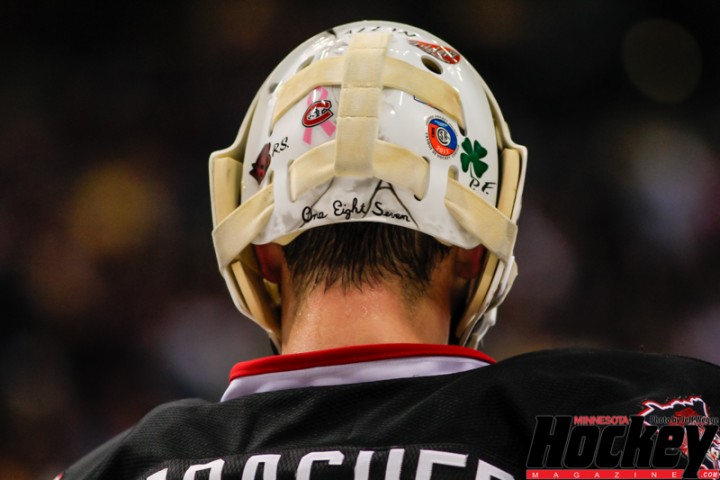 “On my helmet I’ve got the school crest on the top, and mine’s covered in ice, making it look like it’s breaking through,” Faragher explained. “I’ve got a skeleton-type guy on my left side. It’s from one of my favorite bands, Gojira, off their “The Way of All Flesh” album cover.”

“On the back I put both my grandmothers’ initials,” Faragher said. ”They both passed away before I came to college and without them I wouldn’t be here.”

Lining the top of Faragher’s back palette is the team motto ‘All In’, while at the bottom is the name of a song he and his friend wrote together titled “187”.

“For my helmets here on out I’ll always have something to do with
my family and music,” Faragher said. “I still have my first helmet at home, and I’ve had everyone since then.”

The process of creating these works of art is a challenge for both the keeper and the artist, some of whom have never met the creator, and have to use photos and imagination to try and envision what the other is attempting. That’s the case for Lindgren and Gilders Design custom paint company, having never met, yet producing a design that fits the needs and abilities of both parties. 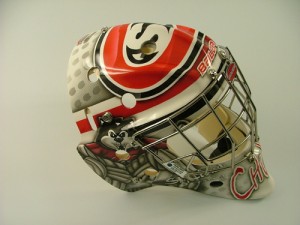 Lindgren’s current helmet has the phrase, “St Cloud Proud”, “All In”, which has been the team’s motto, and a big SCSU logo across the top crest, mimicking that of the Habs. Lindgren also got creative with the hidden, or special effect element of his mask, swapping the husky you often see as a player, and creating a “Husky goalie” on the right ear palette of the helmet.

“I told them the layout as much as I could, referring them to Henrik Lundqvist (goaltender for the New York Rangers) and showed them photos of where I wanted each thing,” Lindgren explained. “It’s tough when you haven’t met the guy who does it, but it turned out great.”

Gilders design seems to have taken over as the favorite of the men’s SCSU goaltenders, a company that has been familiar for their work across the OHL and NCAA college hockey world.

“I’ve seen Gilders’ work on guys in the OHL and around college guys,” Faragher said. “I liked the way he did stuff, so I’ll probably try him out again.”

Based out of London, Ontario, Gilders Design has been in the custom paint service for over 15 years and is a factory authorized painter for Bauer, Eddy Masks, Masked Marvel, and Warwick Masks.

For most, the design process is a give-and-take arrangement, bouncing ideas off one another until both the creator and keeper have an accord. For others, like Phillippi, it’s an opportunity to create a design individually and present it to the designee for approval. 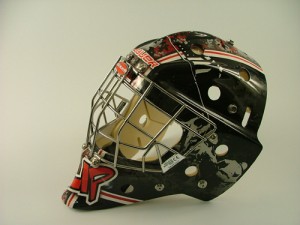 “I’m kind of an artsy guy myself, so I like to design my helmets,” Phillippi said. “I come up with the designs and colors and see what my dad and brother think about it, and I go from there.”

Phillippi’s current design has a military theme, swapping the digital/pixelated camouflage colors with SCSU’s red, black and white, that run up the center panel from brow to the top/end of the front cage. With the military theme, on the left ear panel Phillippi has the popular image of “Raising the Flag on Iwo Jima”, with the soldiers hoisting the country’s colors. On the “Phlip” side the SCSU Husky engulfs the right ear panel, while on his chin the nickname “Flip” is sprayed in white, lined with SCSU black and red.

While many fans watch the games without knowing the man inside the mask, if they were to take the time to examine the works of art, chances are they may have a better idea of just who inhabits it. While being peppered with shots, the painted images on their helmets often mean just as much, if not more, than the blue paint below their blades.