Is the NHL capable of replicating Becky Hammon’s
barrier-breaking hire? 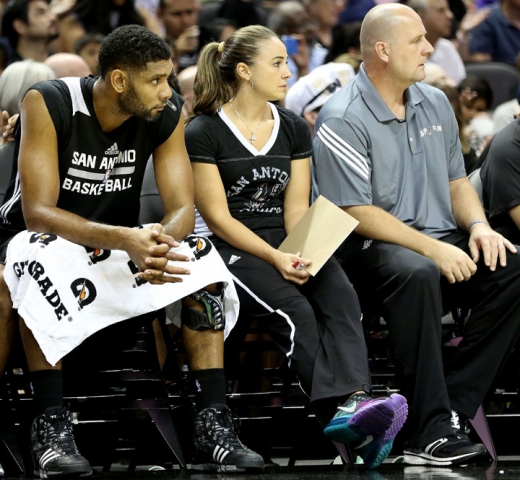 Is the NHL capable of replicating Becky Hammon’s barrier-breaking hire? 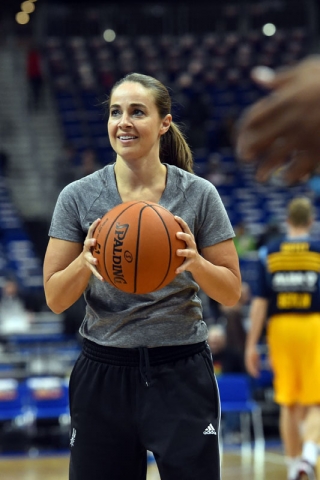 Becky Hammon coaching a San Antonio practice in Berlin where the Spurs participated in the NBA Global Games. (Photo – NBA.com/Spurs)

August 5, 2014 was a historic day. For the first time in the “big four” of professional sports, a woman was hired as a full-time assistant coach when Gregg Popovich, head coach of the NBA’s San Antonio Spurs, added Becky Hammon to his staff.

At the time Hammon was in her final playing days for San Antonio’s WNBA team, the Stars, after a 13-year playing career. Facing retirement, Hammon was given the opportunity to stay within her beloved sport and turn her focus to coaching some of the world’s most elite basketball players.

As the only woman in the male-dominated field, Hammon will certainly garner a lot of attention, but the move also sets a precedent: Will other teams and sports ever consider matching the Spurs’ progressive hire?

The answer is complicated, especially in the hockey world. The first step involves a not-so-simple attitude change.

“It’s a natural assumption that if a man is asked about hockey, he knows what he’s talking about,” University of Minnesota-Duluth Head Coach Shannon Miller said. “Whether it’s him skating out onto the ice and commanding respect at practice, it’s like he’s instantly given that respect because he’s a man, and same thing in an interview process.

“We just assume because he played hockey and he’s a guy that he must know more than a woman. That’s a very, very common mistake; I’ve been watching it go on for years.”

While the fundamentals of the game between men and women are the same, there are differences in the men’s game that do come into play.

As one current National Hockey League assistant coach who spoke on the condition of anonymity noted, many NHL coaches are former players. They’ve played through the grind of a pro season and know firsthand what it takes to put their best effort out on the ice every single night.

“They’ve been through the war, so to speak, and know how physical it is,” said the former player and lone NHL source we contacted willing to discuss the topic. “I think that would be the hardest adjustment with a woman being a coach.

“The battle is a little bit different when you have hard checking and guys getting cut and there’s fighting involved, I think that just would be a hard adjustment for a lot of people.”

This is not to say women don’t get it — because women’s hockey is growing to new heights — but the NHL, like any professional league, is a different sort of monster. As a result, any chance of bringing a woman onto a staff would most likely be best pursued as a gradual process. The NHL coach we spoke to recognized that it may be best if it’s a move that starts in high school, to see how it works and move from there.

“If a woman were to be a coach, I think the players, in my opinion, initially would have a hard time grasping it but I think over time and if you prove yourself, I think the players would get used to it,” he said. “On the other hand, people might find it hard to adjust.” 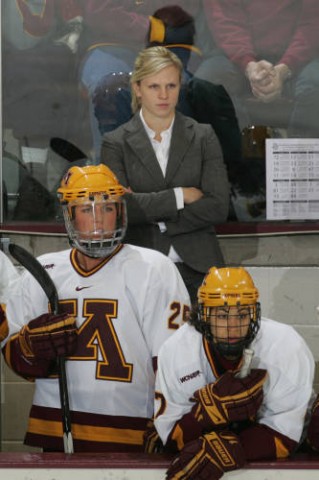 Natalie Darwitz served as an assistant coach for Minnesota in 2008-09 and 2010-11, while taking the 2009-10 season to compete in her third-straight Olympics in 2010. (Photo / University of Minnesota Athletics)

Change, though a constant in life, is something that is always hard to deal with no matter its size. As the NHL assistant pointed out, there are people who are still traditionalists — people who believe hockey is truly a man’s game. These people exist in all levels of hockey, including its fan base.

This sexist attitude partly stems from the physical differences between men and women. As Natalie Darwitz — a standout at the University of Minnesota and U.S. National Team member in the 2002, 2006 and 2010 Olympics — recalled, at a certain point in her storied playing career the guys got bigger and stronger and there was nothing she could do about it.

“That might be a stigma for any female going into the NHL world. Why should a player listen to a female when he can shoot harder and skate harder just because he physically can and she can’t,” said Darwitz, currently the head coach of the Lakeville South Girl’s hockey team after spending two seasons as an assistant for the Gophers. “There’s just a secret ingredient in men called testosterone that women don’t have.”

As Miller points out, rather than looking at a female coach as, well, a woman, she hopes she would be seen as a human being who is competent at her job and is deserving of the respect that comes with the title.

“I think men are given the nod and the automatic ‘oh he must know what he’s talking about,’ and sometimes that’s by women too,” Miller said. “As women, we have to prove ourselves over and over and over and quite frankly it never seems to be enough.” 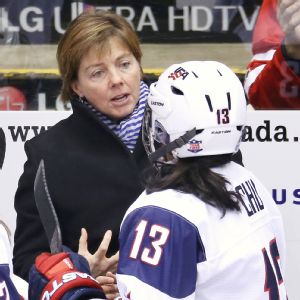 In fact, female head coaches are in the minority in their own sport. Harvard head coach Katey Stone was the first woman to coach the USA’s women’s team in the Olympics as the leader in Sochi. She and Miller are also two of six female bench bosses out of the 35 teams in Division I college hockey. Furthermore, Stone and Miller oversee two of just three programs with an all-female coaching staff. Notably, of those 35 programs, three have no female on staff, while the other 32 have at least one female assistant.

Both Stone and Miller expressed their extreme disappointment upon hearing those numbers and believe there are plenty of women out there capable of coaching.

“There are a lot of women out there that can coach if given the opportunity,” Miller said. “Athletic Directors continue to hire men to coach on the women’s side and I think it’s a grave mistake. I’m disappointed and I hope that one day the pendulum will swing back, sooner rather than later.”

Stone did acknowledge that there is no way those statistics can be changed quickly in one sweeping motion, while Darwitz explained that in being a coach, there are plenty of lifestyle considerations, such as having a family. Regardless, in Darwitz’s own words, the statistic remains pretty staggering.

But the women in those positions are content to stay there to a degree. Miller noted that, as a coach in what she believes is currently the best league in the world for women hockey players, she is coaching at the highest level on a day-to-day basis. Stone also acknowledged that many women are happy to stay within women’s hockey.

“It’s a little bit of a double edged sword: you need the backing of those (NHL) organizations, but you also need the willingness of women willing to put themselves in that arena,” Stone said. “Some women are very, very content in an extremely positive way, coaching women. They love it. They feel like they’re giving back a tremendous amount.”

That being said, Darwitz, Stone and Miller all believe there are competent women willing and deserving to make that historic move into the NHL.

Shannon Miller is beginning her 16th season behind the Bulldogs’ bench after leading Team Canada to a silver medal in the 1998 Olympics in Nagano, Japan. (Photo / WCHA.com)

While Miller is outspoken on the subject, she did raise the point that simply asking when a female coach will break into the NHL suggests that men’s hockey is superior to women’s hockey; that the game played by one gender is more important than that same game played by the other gender. Even with that in mind, she believes it’s past time women were given more opportunities to lead, both within women’s hockey and men’s hockey.

“If men can cross over and coach in the women’s game, why can’t women cross over and coach in the men’s game,” Miller said. “I know that you have to be a high-level coach and have proven yourself and worked your way up and proven to be successful through the grind, but there are women who have done that and there’s no question in my mind that there are women that can coach at the NHL level.”

Though some are ready for such a change, it is something that will take some time; it most likely won’t happen in the near future and it could never happen. When and if it does happen, it will undoubtedly be a significant day in hockey history.

“Any time something’s new or it’s the first time, it makes a big splash; when it’s not new anymore, it has a very small ripple effect,” Stone said. “It’s about competency and respect. If the people that you’re working with respect your judgment, your knowledge, how you go about your work, then it’s not difficult to gain their trust.”