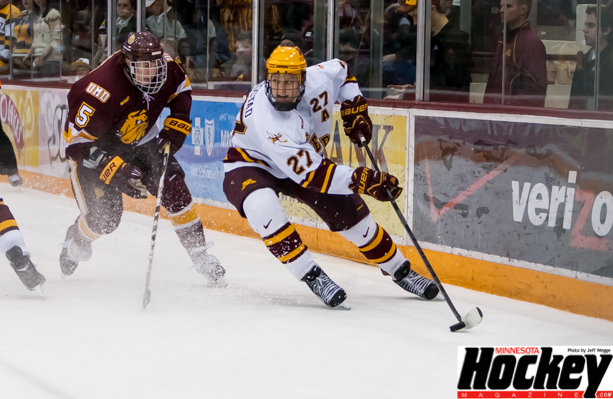 Nick Bjugstad’s perfect path leads him to the NHL 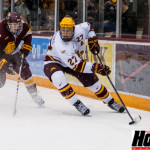 Nick Bjugstad is living the dream. So much so it’s as if the term was made for the former Minnesota high school and college star who now plays his hockey a mere 15 miles from Florida’s Atlantic coast.

While growing up idolizing high school hockey players in his hometown of Blaine, Minn., Bjugstad dreamed of one day donning the Bengal’s jersey and playing in the Minnesota state high school hockey tournament. But before he would wear that uniform he had to make a very tough decision between playing for the U.S. National Development Program in Michigan or staying at home to play.

“I decided to play at Blaine instead of with the U.S. team because I grew up watching high school hockey and the state tournaments,” Bjugstad said. “It was a great tradition so I felt that it was a better fit for me and that I could develop there, produce more of a scoring touch and would build more confidence playing in high school.”

Bjugstad indeed played three seasons for the Bengals, leading them to the state tournament each time (2008-2010) but never won the state title he sought. In his last year at Blaine, Bjugstad racked up 69 points (35-34) in 35 games and was awarded the prestigious Mr. Hockey award given to the most outstanding high school senior hockey player in Minnesota.

Not only was Bjugstad a step ahead in hockey, he took on the challenge of rising above the crowd in school as well. By taking summer courses and extra classes his junior year he was able to graduate a year early in 2010 which accelerated his dream of playing hockey for the Gophers.

“I had never really thought about doing that until I saw Aaron Ness do it and I thought that was pretty cool to see him do,” Bjugstad said. “I talked to [Minnesota coach Don] Lucia the summer between my sophomore and junior year and he thought that I would be ready a little early so I accelerated.”

Bjugstad always knew that he wanted to skate with the maroon and gold jersey flapping in the air so when it became a reality it was a dream come true.

“When I first met with Lucia my freshman year it was awesome because I never thought I could make it there especially at that young age,” Bjugstad said. “It was very surreal sitting in Don’s office. I didn’t really think about going anywhere else; I knew right away that I wanted to go there.”

In his first season with the Gophers in 2010-2011, Bjugstad received the Frank Pond Rookie of the Year award while registering 20 points (8g-12a). He began turning heads when, as a sophomore, he was named to the All-WCHA First Team, won national Player of the Month for November and led the team in goal scoring with 25. Additionally, he led Minnesota to the MacNaughton Cup title, as WCHA regular season champions, and to the Frozen Four.

After an outstanding sophomore season there were many who speculated that Bjugstad, a first-round pick (19th overall) in the 2010 NHL Entry Draft by the Florida Panthers, would leave the Gophers and embark on his NHL career. Bjugstad chose to stay, however, because he felt Minnesota had the talent to make another run at the National Championship.

“I had a good year my sophomore year, but we didn’t win it all like we wanted to,” Bjugstad lamented. “We came close, but it was the fact that we had another chance the next season. I was with a great group of guys and we had another shot at it.”

The Gophers indeed had another shot at it thanks to an exceptional season in which they captured a second straight MacNaughton Cup (shared with St. Cloud State). But a heartbreaking overtime loss in the first round of the NCAA tournament to eventual champion, Yale, dashed the Gophers’, and Bjugstad’s, championship hopes.

As a junior, Bjugstad was named to the All-WCHA Third Team after leading Minnesota in goal scoring with 21 and finishing third on the team with 36 points. Shortly after Minnesota’s season came to a stunning end, Bjugstad made the difficult decision to forgo his senior season with the Golden Gophers and sign with the Panthers.

“I didn’t really know what I was going to do,” Bjugstad said. “The offer was on the table and I took it because I felt that it was time to move on with my career.”

On April 3rd, 2013, Bjugstad officially became a professional hockey player and his NHL dream was realized three days later when he made his NHL debut as the Panthers hosted Washington. Stepping into his first NHL locker room was imposing and awe-inspiring for the rookie.

“I was pretty wide-eyed to begin with getting in that locker room and seeing my jersey there,” Bjugstad recalled. “Everyone was very welcoming and the coaches were really helpful with getting me to learn their systems.”

“My first game was against the Capitals and [Alex] Ovechkin actually had a hat-trick which was pretty intimidating,” he said with a laugh. “Getting on the ice for those first couple shifts, I wasn’t thinking too much, I was just trying to play defensively.”

Finishing the season with Florida was a great experience for Bjugstad and his development. In all, Bjugstad played 11 games, scoring 1 goal and firing 17 shots.

“I didn’t expect that one coming,” Bjugstad said. “I got the call about a week after the season with Florida. It was very fun going out there and seeing what it is like in Europe.”

One of Bjugstad’s teammates at the World Championships was arch-rival Danny Kristo. When asked what it was like playing with his antagonist from Eden Prairie and hated North Dakota, he responded with a laugh.

“Danny was actually my roommate in Europe,” Bjugstad said. “We always went at it when we played each other, but that’s how it is when you play against someone in hockey then you end up playing on a team with them; you become friends.”

The two longtime combatants managed to collaborate together to form a strong line helping the U.S. reach the podium for the first time since 2004.

“It was funny that we were on the same line,” Bjugstad said. We always brought up some of the events that happened in college and some of the fights that we got in to. It was a good time.”

Bjugstad’s biggest idols growing up were his dad and his uncle, fellow former Gopher Scott Bjugstad who played 317 gamed for three NHL teams, including the Minnesota North Stars, between 1984 and 1992. Although he never got to see them play, they served as important role models for him.

Another of Bjugstad’s heroes growing up was NHLer Matt Hendricks, a fellow Blaine native, who signed a free-agent deal with the Nashville Predators last week after three seasons with the Capitals. Bjugstad was inspired by watching Hendricks lead the Bengals to the 2000 state title before going on to star at St. Cloud State and, ultimately, reach the NHL.

Bjugstad offered some advice to young hockey players who may aspire to achieve what he has: Enjoy it.

“Don’t have your parents push you too much,” Bjugstad said. “You have to make sure that you are having fun as well as working hard.”

Nick Bjugstad is proof that with hard work dreams do come true.