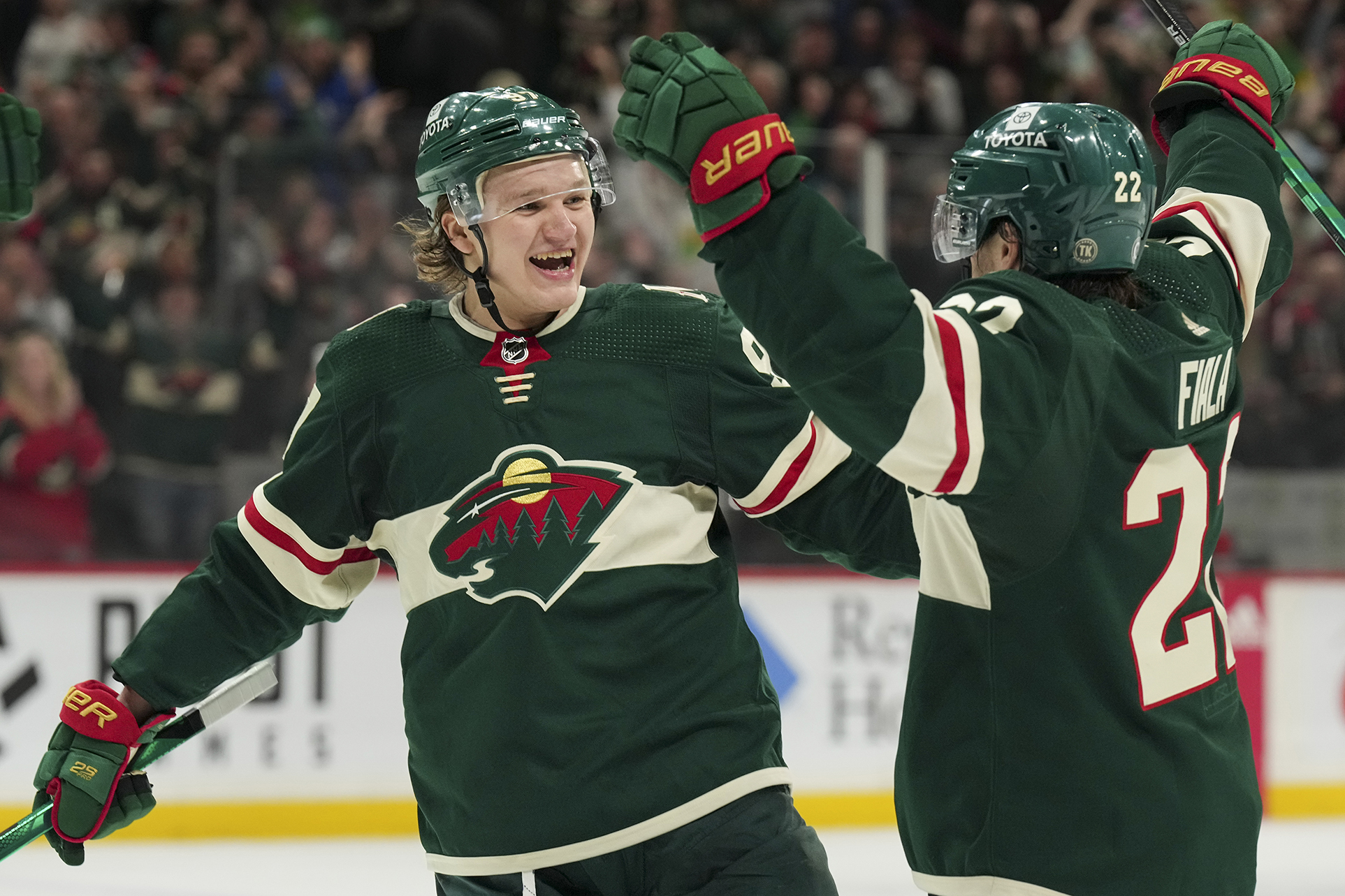 In a season filled with records set and milestones reached, Kirill Kaprizov and Kevin Fiala established themselves as the most prolific scorers in Minnesota Wild history. (MHM Photo / Rick Olson)

Wild winger Kirill Kaprizov started his 2021-22 campaign fresh off a five-year, $45 million deal and then didn’t find the back of the net on the ice in the month of October. Wild fans who were nervous about the superstar’s early lack of production can look back on that and get a good chuckle. 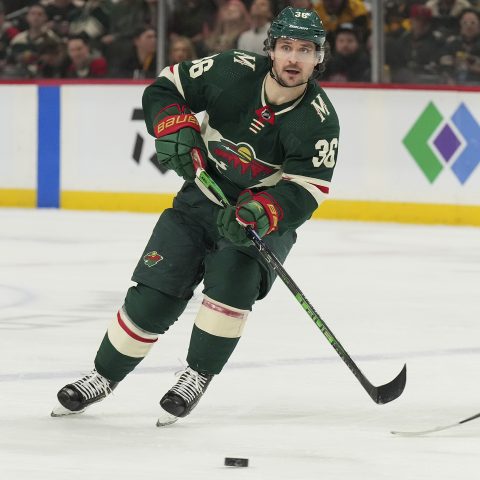 Mats Zuccarello, one of several Wild players to have career seasons in 2021-22, created magic with Kirill Kaprizov for a second straight season. (MHM Photo / Rick Olson)

His linemate Mats Zuccarello said in mid-November that someone told him Kaprizov was “squeezing his stick.”

“He’s still got a lot of assists and played really good,” Zuccarello said, after Kaprizov scored a goal and three assists against Dallas on Nov. 18.

Kaprizov turned in the best single-season performance in Minnesota Wild franchise history. His 47 goals, 61 assists and 108 points all bumped him to the top of the list among Wild players.

Call him Kirill the Thrill or Dolla Bill Kirill, either way, he’s a superstar on this Wild team. He wasn’t done dazzling in the regular-season finale either, when he skated circles around the Colorado Avalanche before passing the puck to teammate Tyson Jost for a goal.

“Yeah, it was a great play by him,” Jost said, following the game. “I mean I’ve seen him do enough for however long I’ve been here, for 20 games. It seems like he does that every single game. I was just battling in front and kind of knew that if I got open, he was going to find me. He made a great play.”

Jost, acquired from Colorado by the Wild for Nico Strum ahead of the NHL trade deadline, isn’t the first player to talk about Kaprizov like this and his ability to feed teammates. Frederick Gaudreau was the benefactor of such a play during a Nov. 18 7-2 victory over Dallas. That time, it was a behind-the-back pass from Kaprizov. Gaudreau said afterward that there’s a good chance Kaprizov knows where you are on the ice, even if it doesn’t seem like it.

It seems almost trite to refer to Kaprizov as the superstar of this Wild team. But he’s lived up to that and then some. Of the long list of franchise records broken this season, Kaprizov’s name is on 10 of those records, along with tying two more individual records.

He was the leader of a 2021-22 Wild team that also is the best one in history, setting records for most wins in a season with 53 and most points in a season with 113. The Wild (53-22-7) edged out the St. Louis Blues for the No. 2 spot in the Central Division and gained home-ice advantage when the two teams face each other in the first round of the Stanley Cup Playoffs this week.

The Wild re-wrote the team record book by tying or breaking 39 individual and 40 team franchise records this season. 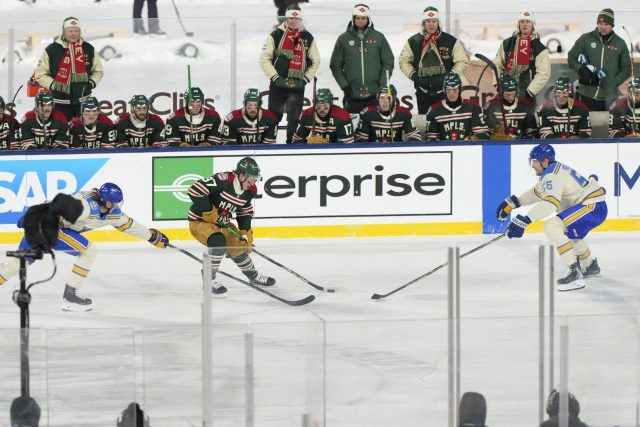 It was a year where teams tried to get back to some kind of normalcy within a pandemic but still saw players go down at various times under COVID-19 protocols. The Olympic break built into the NHL schedule was canceled, making for a whirlwind finish with games every couple of nights or back-to-back for the final two months. The Wild finally got to host the Winter Classic on New Year’s Day, to the tune of way-below-zero temperatures at Target Field.

Still, the Wild found a way to win games with goaltending, depth and a league-best nine multi-goal comeback victories. It was quite the regular season and one that should be remembered fondly for all the highlight-worthy goals and performances. Regardless of what happens in the playoffs.

Can fans enjoy some entertaining hockey games over the course of the season, and still be disappointed if the team fails to win a Stanley Cup or make it past the second round of the playoffs? Yes. Both things can be true.

Besides Kaprizov, the Wild got breakout performances from many players on the roster this year. Let’s start with his linemate Zuccarello, a 34-year-old NHL veteran with nearly 700 career games under his belt. The pair’s chemistry on the ice this year was evident throughout, and Zuccarello shattered his career-highs in assists (55) and points (79) for the season. He set three franchise records, including a record for the most consecutive multi-point games with six from Jan. 24-28.

The center for that top line – Ryan Hartman – is one of the best steals for his production. He signed to a three-year, $5.1 million extension last spring. His first two seasons with the Wild, his goal total failed to reach double-digits. He nearly quadrupled his goal output last year (51 games) and nearly tripled his points when he scored 34 goals, 31 assists for 65 points this season, reaching career-high marks long ago. Early on, he led the team with his four goals in October and finished the year second in goals. A bit of a surprise and definitely falls in the unsung hero category of this year’s team. 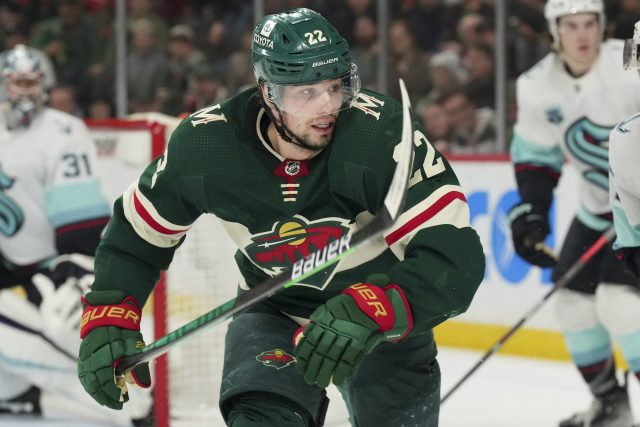 With work ethic to match his puck wizardry Kevin Fiala’s value has skyrocketed this season. Can the Wild keep him? (MHM Photo / Rick Olson)

The Wild don’t only have offensive power on the top line, of course. The next biggest name is winger Kevin Fiala, where the chatter surrounding his name this season has gone from “He’s going to be traded, the Wild can’t afford to keep him” to “Man, what are the Wild going to do? Because they *have* to keep him?”

One of his latest bodies of work was a franchise-record five-assist game in a 6-3 victory over the Seattle Kraken on April 22. His four assists in the second period alone also set a record.

“Everything I touched went in, it felt like, especially in the second period,” Fiala said after that game. “So it was a nice game.”

He finished second on the team in points behind Kaprizov and third in goals and assists with his 33-52—85 season. All of those numbers shattered his career-high numbers, too. He’s also gotten hot at the right time lately, setting a franchise record for most points in four consecutive games with 4 goals, 9 assists for 13 points from April 17-22.

Fiala and Hartman also tied for the team lead with seven game-winning goals this season, which is part of what makes Fiala such a special part of this offense. It’s not just the numbers that he’s put up but the type of plays and clutch goals he’s scored or assisted on. 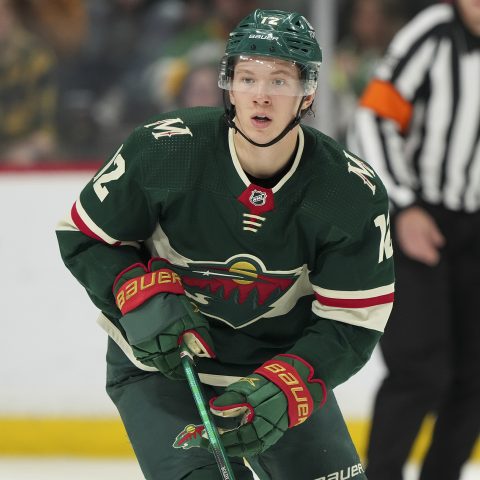 On Fiala’s opposite wing is rookie Matt Boldy, who added his name to plenty of rookie franchise records this season after joining the team in Boston on Jan. 6. He scored one of his 15 goals this season in that NHL debut and added 24 assists along the way, too. It was clear right away that once Boldy was called up, he wouldn’t be going back down to Iowa.

Gaudreau has impressed centering Fiala and Boldy. Then there’s the tough GREEF line of Jordan Greenway, Joel Eriksson Ek and Marcus Foligno. The defensive core and goaltending contributed to the various team franchise records as well.

But for all the fanfare around individual milestones and franchise records, it’s not something Wild head coach Dean Evason and the Wild focused on. What they did talk about was how hard it can be to make the playoffs in the NHL, Evason said following the team’s 3-2 overtime victory over Calgary on April 28.

“It’s a grind,” Evason said. “It is an absolute grind.

“So, no, we’re not reflecting on anything. We stay with what we do, and that’s game-by-game and day-by-day. That’s our mentality and we’ll continue to do that through the playoffs.”

Cheers to the 2021-22 #mnwild regular season! Take a look at the many franchise records that were broken this season: pic.twitter.com/fE5ZsRbHGu