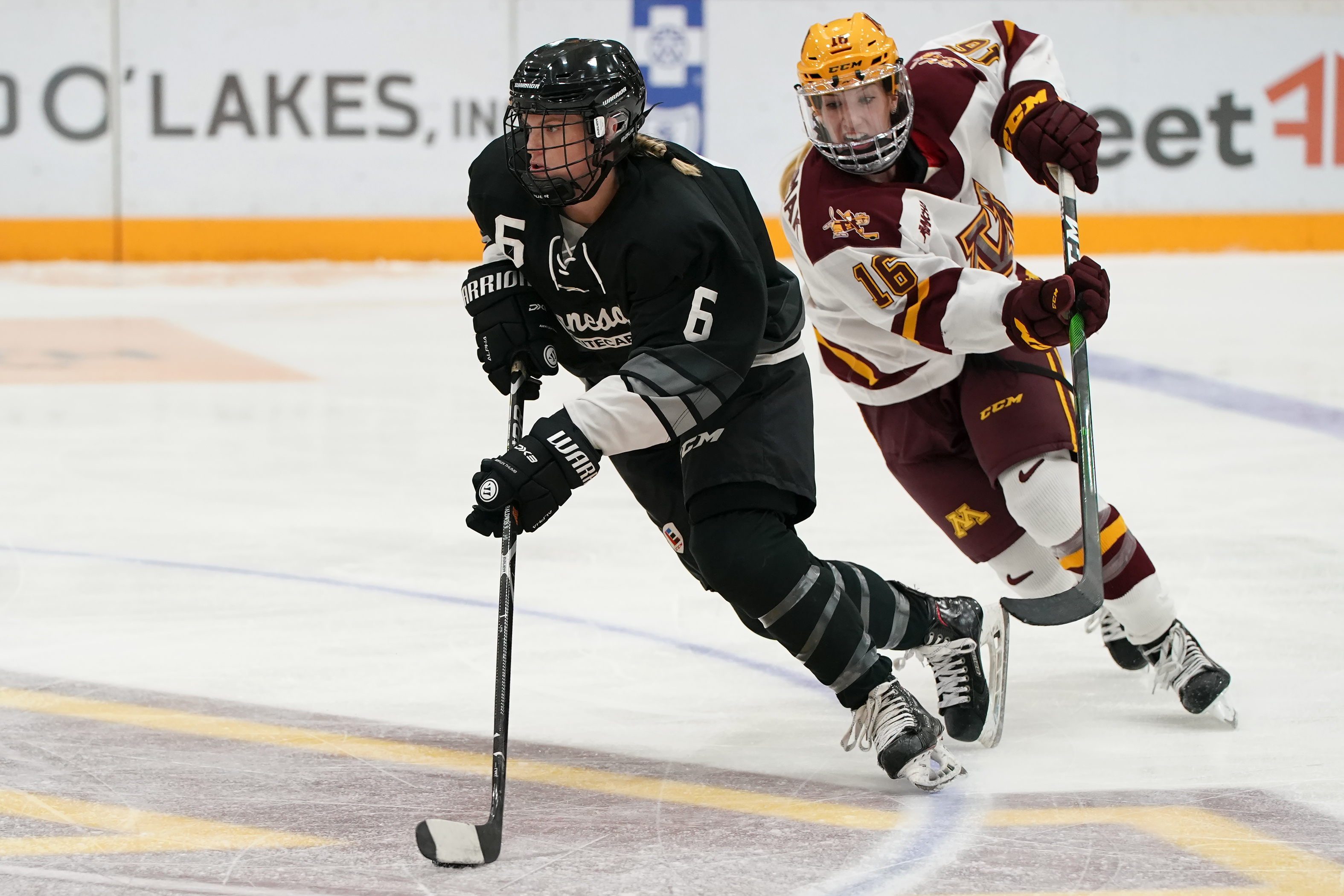 Sydney Baldwin carries the puck up ice against her former teammates in a Sept. 22 exhibition game between the Whitecaps and the Gophers at Ridder Arena. (MHM Photo / Rick Olson)

After a college career with the Gophers women’s hockey team, Nicole Schammel is no stranger to playing weekend series against opponents. But the schedule she’s playing this season as a rookie in the National Women’s Hockey League as a forward for the Minnesota Whitecaps isn’t quite the same.

There are 24 regular-season games compared to 38- or 39-game seasons she played with the Gophers.

“I think there’s definitely pros and cons to going every couple weekends,” Schammel said. “You feel fresh, but you also kind of feel like you aren’t in game shape.” 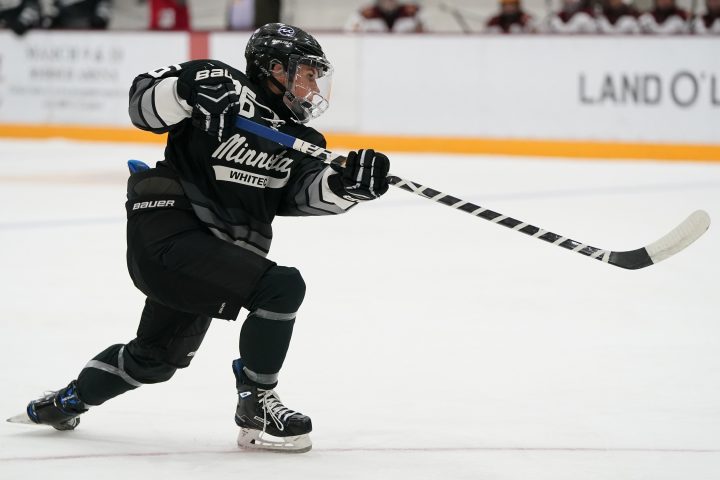 Whatever the schedule, Schammel is finding her way as one of the top players for the Whitecaps this season. She’s one of seven former Gophers on the team, four of whom are playing their NWHL rookies seasons this year.

A lot of the Whitecaps players work as coaches. For instance, Schammel is an assistant coach for the Breck girls’ high school team.

“So that actually helps with not playing as much,” Schammel said. “That you’re still around the game, and watching a game can be really advantageous.”

Lorence said she and Schammel have similar vision on the ice. Lorence graduated from Minnesota in 2015 after 102 points in 148 games across four years with the Gophers.  She and Schammel didn’t overlap, as Schammel finished up her redshirt-senior season last year.

“Just finding each other and making those plays,” Lorence said. “It helps coming from the same system from college.”

The Whitecaps are second in the five-team NWHL standings at 7-3-2 behind an undefeated Boston team (13-0-0). Along with Schammel and Lorence, defenseman Sydney Baldwin, Kelsey Cline, goaltender Amanda Leveille, Winny Brown and Chelsey Rosenthal are all former Gophers.

“I think, in general, a lot of us are from Minnesota,” Baldwin said. “So we were familiar with playing with each other in summer leagues or in the offseason, so we do have a little bit of that familiarity.” 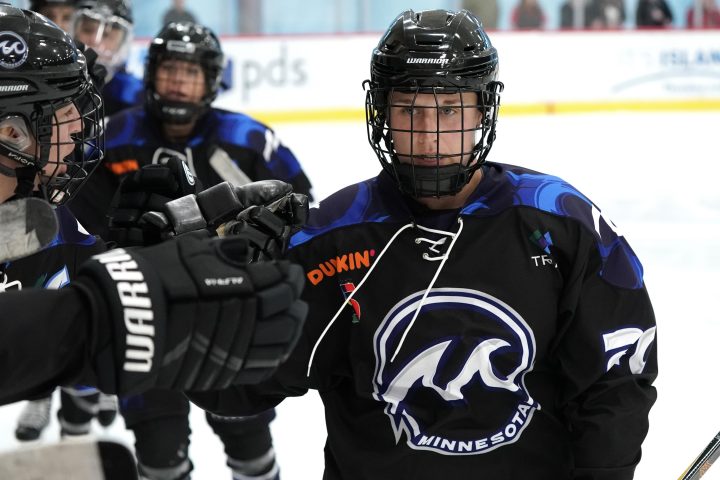 With the regular season halfway in the books for 2019-20, Schammel ranks second on the team in goals (7), points (14) and is a plus-7 in 12 games. She’s also won 32-of-33 faceoffs and leads the team with 92 shots. Baldwin is on the top defensive pair with Amanda Boulier. Baldwin has 5 goals and 11 points in 10 games with a plus-8. Lorence has five goals and eight points in 12 games. Schammel and Lorence are tied with two others for the team lead with two power-play goals each.

When the Whitecaps returned to TRIA Rink for their second home series of the season Dec. 14-15 v. the Metropolitan Riveters, they split with a 3-2 shootout loss and 5-2 win. In the loss, the two goals came from the third line, from Audra Richards and Allie Thunstrom to tie the game each time. Thunstrom, Schammel and Schmid all came up empty in the shootout. Minnesota rebounded the next afternoon with a 5-2 win with goals from Schammel, Baldwin, two from Richards and Stephanie Anderson.

The Whitecaps followed that up the next weekend with a sweep in Connecticut in a 3-0 shutout and 2-1 victory. This road series happened to line up with the Minnesota Wild’s fourth annual Girls’ Hockey Weekend with festivities held at Xcel Energy Center. Proceeds from the Wild game magazine sales and the “Split the Pot Raffle” for the Wild’s Dec. 21 game against the Winnipeg Jets went to the Whitecaps. The Wild also hosted dryland training and on-ice clinics for girls on 12U, 10U, and 8U teams that Saturday.

Though the Whitecaps weren’t in town for girls’ hockey weekend, they still got in on the action at Xcel Energy Center when they hosted a free skating event for the public ahead of their practice held on the NHL ice surface on Thursday. 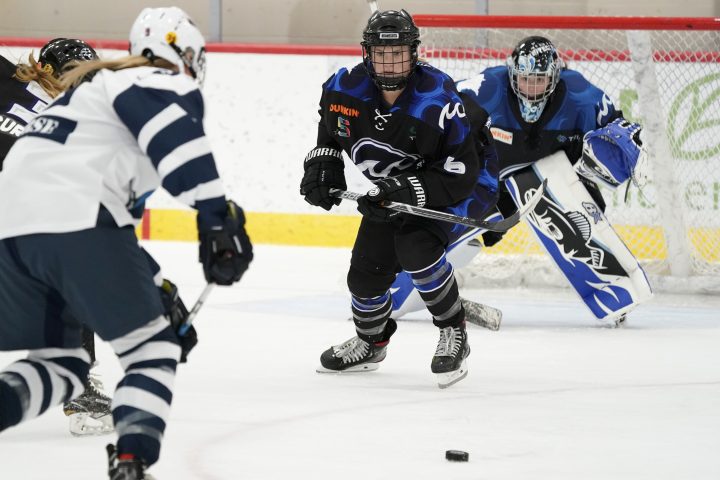 It’s yet another chance for young girls to interact with female professional hockey players. Both Whitecaps and Riveters players also participated in the Girls Outdoor Classic on Dec. 14 at the Roseville Oval. Whitecaps players were there as referees and dropped pucks for some of the 4-on-4 games going on, according to Lorence, though they “were mostly just there to socialize with the girls, and cheer them on,” Lorence said.

It’s another good opportunity to grow the game, according to Baldwin.

“Everyone’s happy being outside, and it was halfway decent weather, playing a little pond hockey,” Baldwin said.

There’s no shortage of role models, and players like Schammel, who wanted to be a Whitecaps player since she was little, are enjoying their time in the NWHL.

“I think post-grad, there’s not a ton of opportunities to play, and I’m just grateful for the opportunity to continue to dress,” Baldwin said. “I’m at a point where I’m still very competitive and like to be able to get in the lineup and play a good game.”

The Whitecaps return to action in St. Paul for three straight weekends of hockey in January, starting with a couple games against Buffalo on Jan. 11. They’ll finish the regular season with another home series against Connecticut on Feb. 29 and March 1.