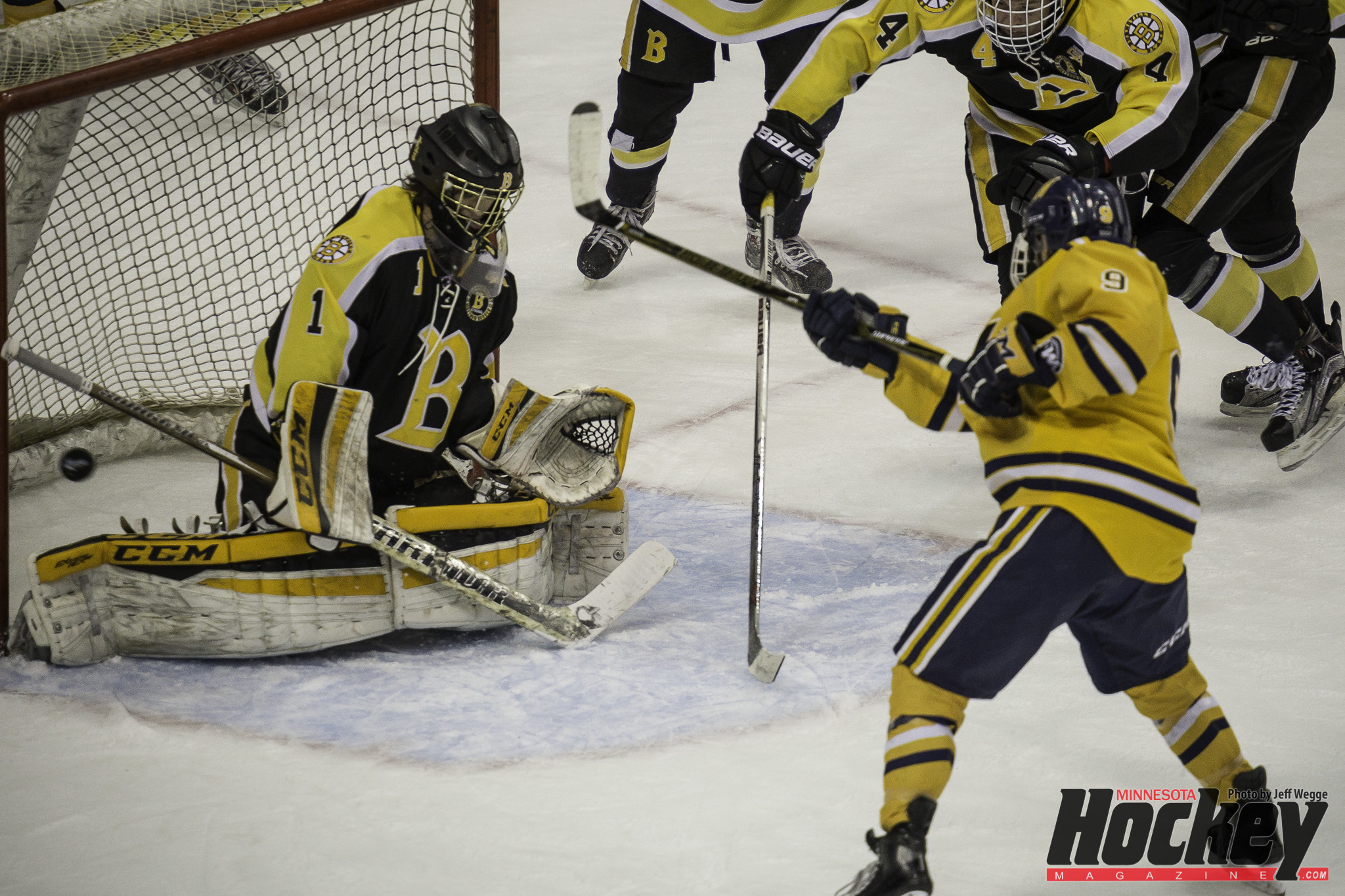 St. Paul – The Wayzata Trojans found themselves down 1-0 after the first period. Just like they were down 1-0 against Edina and then Cretin-Derham Hall in the section playoffs.

So, they responded with a three-goal second period.

“The whole mojo on the bench changes completely,” said Wayzata coach Pat O’Leary. “If we’ve been down by a goal or two… we tend to not shorten our bench.”

“We knew we’re going to come back,” Paterson said. “It was just a matter of when.”

That depth and changed mojo led to a 3-1 victory for No. 3 seed Wayzata (20-8-1) over Burnsville (16-11-2) in the Class 2A quarterfinal Friday afternoon at Xcel Energy Center sent the Trojans into the semifinals against Stillwater on Friday.

It was a scoreless tie until Burnsville’s senior forward Cade Borchardt scored with 45 seconds left in the first period.

Wayzata got goals 43 seconds apart early in the second period to take a quick 2-1 lead. Senior forward Dillon Riley added another late in the period for a two-goal cushion.

First it was senior forward Mark Senden at 2:46 of the second period. He drove into the zone crashing the net and moved the puck to his backhand at the last minute to put it away for the score. It’s a play he said he works on all the time.

“I thought he would be expecting me to pull it around to the other side,” Senden said, on why he chose to go to his backhand.

Then after a Burnsville scoring chance, senior defenseman Noah Fuhmann made a bank pass off the boards which went right over to Paterson’s stick.

But Burnsville hung in there, leading shots on goal 18-16 through two periods. They were feeling confident taking a 1-0 lead into the dressing room after the first period.

“I thought we were playing our hockey,” said Burnsville coach Janne Kivihalme.

On the other side, O’Leary said the first period was “really uncharacteristic” for his team. Things started to change for the better for Wayzata when its players started moving their feet, O’Leary said.

Wayzata senior goaltender Alex Schilling was the difference in the game in the first, according to his coach. Schilling took a beating in the cage early on, getting the benefit of a goaltender interference penalty and having players crash the net all around – or on top – of him. He also came up big with a couple phenomenal saves and stopped Burnsville’s Gavin Wagner as he tried to go upstairs on a 2-on-1 try.

“They were coming to the net strong,” Schilling said. “I knew they were going to be pushing hard.”

Schilling made 21 saves in the game.

For Burnsville, it was three “uncharacteristic mistakes” that led to Wayzata goals, Kivihalme said.

“It could’ve been a 1-0 game if we’d eliminate those three mistakes,” he said.

Having a 1-0 turn into a 2-1 deficit “hits you hard,” Borchardt said, but finding a way to re-group is part of hockey.

“We didn’t pop one after that,” Borchardt said.

The loss for the Blaze snaps their eight-game winning streak.

“It was a fun run,” Borchardt said. “I knew we had a good chance going in.”